On a warm night last month, amateur astronomerEthan Chappel set up a small telescope in his backyard in Cibolo, Texas and pointed it toward Jupiter. As the behemoth planet came into focus, a burst of light erupted on its surface — the flash was as bright as Jupiter’s moon Io.

A new analysis of Chappel’s video suggests that he accidentally captured the moment a 450-ton meteor crashed into Jupiter. The analysis, conducted by Ramanakumar Sankar and Csaba Palotai at the Florida Institute of Technology, calculated the energy of the resulting explosion to be equivalent to 240,000 tons of TNT.

That makes this the sixth impact flash on Jupiter that’s been visible from Earth since 2010, and the second-brightest of those flashes.

“Capturing videos are a normal part of my routine. I was lucky to be there at the right time,” Chappeltold Business Insider shortly after publishing the images on Twitter.

The flash of the meteor’s explosion appears near the center-left of Jupiter’s outline about 5 seconds into Chappel’s video (below). It lasts about 1.5 seconds.

The video is the researchers’ only data on the impact, but Palotai told Business Insider in an email that his team has “some modeling capability that can possibly shed light on some of the details … that cannot be inferred from the video only.”

The researchers hope to submit their analysis for publication in about a month, he added.

Marc Delcroix, a French amateur astronomer who studies these impact flashes, explained in apress release that detecting an event like this is rare.

“The impact flashes are faint, short, and can be easily missed while observing the planets for hours,” he said.

Even Chappel didn’t realize what he had captured until he processed the video a few hours later. That’s when he called Delcroix, who then called planetary scientist Ricardo Hueso. Delcroix and Hueso are the designers of a software tool calledDeTeCt that Chappel used to process the video.

“In less than two days after the impact, we had a light-curve of the impact and a first estimate of size and mass of the object,” Hueso told Business Insider in an email.

Meanwhile in Florida, Sankar and Palotai saw Chappel’s video “all over the news,” Palotai said, and started their own preliminary analysis. The two groups soon linked up. 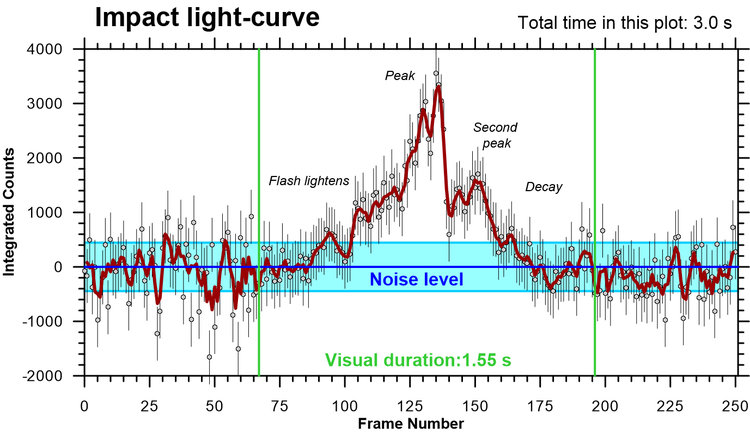 “It is the first time that we have had a data with a quality good enough to characterize [a meteor’s] fragmentation in Jupiter’s atmosphere,” Hueso said.

That fragmentation allowed Sankar and Palotai to make precise estimates of the meteor’s density. They found it to be similar to a stony-iron meteor, which is made of silicate, nickel, and iron. That likely means the object was an asteroid, rather than a comet. (Asteroids are made up of rock and metals, while comets are ice, dust, and rock.)

Left: a composite image of the flash made with several stills from Ethan Chappel’s video. Center: the impact flash with Jupiter’s light removed from the image. Right: a zoom of the flash at the peak of its brightness.E. Chappel/R. Hueso/M. Delcroix/DeTeCt

The findings, which Delcroix and Huesopresented at a conference in Geneva this week, also suggest the meteor was about 39 to 52 feet (12 to 16 meters) in diameter. It disintegrated about 50 miles (80 kilometers) above Jupiter’s clouds.

The energy the collision emitted was about half of what theChelyabinsk meteor released when it exploded in Earth’s atmosphere, above the Russian city of the same name in 2013. 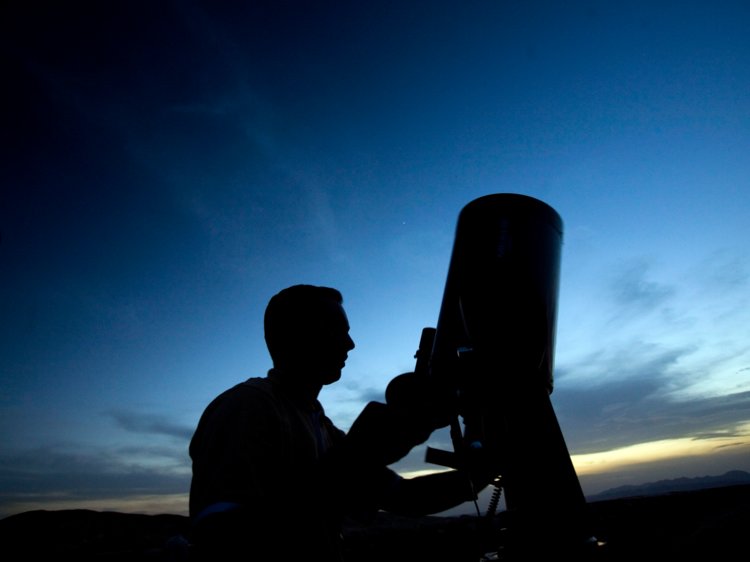 An amateur astronomer sets up a telescope while taking part in the Messier Marathon at Ghasre Bahram in Iran’s central desert, 150 km (94 miles) south east of Tehran May 10, 2007.Reuters/Morteza Nikoubazl

Hueso said that before Chappel’s video of the August impact, he estimated that 10 to 60 objects like this crash into Jupiter each year. But he’s now revised that number to somewhere between 20 and 60 collisions.

“Because of Jupiter’s large size and gravitational field, this impact rate is 10,000 times larger than the impact rate of similar objects on Earth,” Hueso said in the press release.

Hueso and Delcroix run an amateur impact-flash detection project, so both hope that Chappel’s video will spur more amateur astronomers to gather similar footage of impacts on Jupiter and Saturn.

“The amateur community has been galvanized by this event,” Delcroix said. “The number of observers and the volume of data being processed is increasing rapidly.”

Madonna, 61, emerges from hospital using a crutch amid recovery from knee injury… after admitting she was left feeling like a ‘broken doll held together…