Scientists have shed new light on how the ingredients for life formed on Mars, and it could guide our search for aliens on other distant worlds.

A study of Martian meteorites shows that salt water and volcanic rock were all that was needed to form organic carbon on Mars – one of the key buildings blocks of life.

A similar process could have spawned the chemical at any spot in the solar system where igneous rocks are surrounded by salty brines, researchers said.

Pictured is a high-resolution microscopic image of a grain from a Martian meteorite. Organic carbon – one of the key building blocks for life – was found between the intact ‘prongs’

Scientists at the Carnegie Institution for Science in Washington, DC, studied a trio of Martian meteorites that fell to Earth: Nakhla, Tissint and NWA 1950.

This proved the chemicals came from Martian soil, rather than from Earth after they landed.

State-of-the-art microscope imaging revealed the compounds likely formed when Martian rocks were broken down by a surrounding salty liquid brine.

Minerals within the rocks likely corroded when they came into contact with the brine, forming organic carbon. 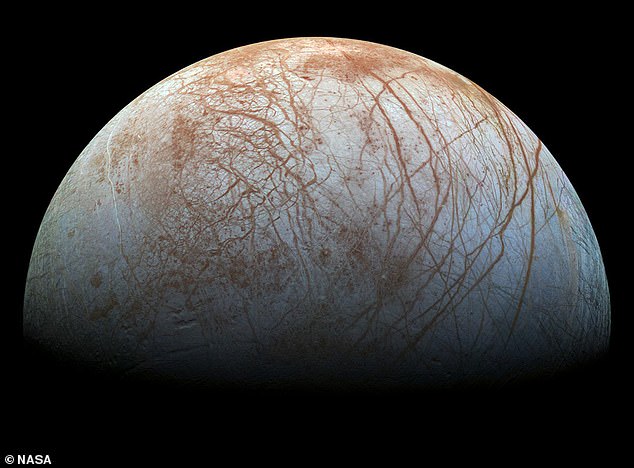 Researchers say the process that formed organic carbon on Mars could have spawned the chemical anywhere in the solar system where igneous rocks are surrounded by salty brines. This includes the mysterious subsurface oceans of Jupiter’s moon Europa (pictured)

Organic carbon is a key building block of life as we know it alongside water and an oxygen and nitrogen-rich atmosphere.

The chemical needs to be present for life to grow, and the new study opens up several spots across the solar system to the possibility of alien life.

These include Jupiter’s moon Europa and Saturn’s moon Enceladus, which are both believed to house igneous rock surrounded by a salty subsurface ocean.

‘Revealing the processes by which organic carbon compounds form on Mars has been a matter of tremendous interest for understanding its potential for habitability,’ study coauthor Dr Andrew Steele said.

‘The discovery that natural systems can essentially form a small corrosion-powered battery that drives electrochemical reactions between minerals and surrounding liquid has major implications for the astrobiology field.’ 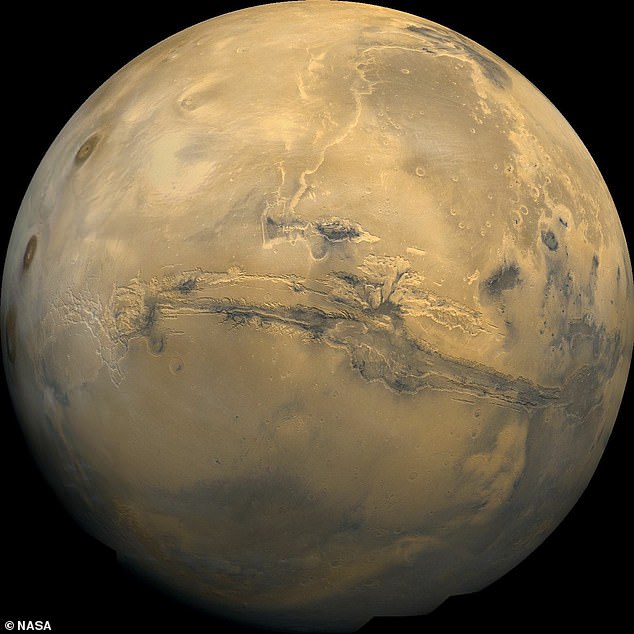 WHAT EVIDENCE DO SCIENTISTS HAVE FOR LIFE ON MARS?

The search for life on other planets has captivated mankind for decades.

But the reality could be a little less like the Hollywood blockbusters, scientists have revealed.

They say if there was life on the red planet, it probably will present itself as fossilized bacteria – and have proposed a new way to look for it.

Here are the most promising signs of life so far –

When looking for life on Mars, experts agree that water is key.

Although the planet is now rocky and barren with water locked up in polar ice caps there could have been water in the past.

In 2000, scientists first spotted evidence for the existence of water on Mars.

The Nasa Mars Global Surveyor found gullies that could have been created by flowing water.

The debate is ongoing as to whether these recurring slope lineae (RSL) could have been formed from water flow.

Earth has been hit by 34 meteorites from Mars, three of which are believed to have the potential to carry evidence of past life on the planet, writes Space.com.

In 1996, experts found a meteorite in Antarctica known as ALH 84001 that contained fossilised bacteria-like formations.

However, in 2012, experts concluded that this organic material had been formed by volcanic activity without the involvement of life.

The first close-ups of the planet were taken by the 1964 Mariner 4 mission.

These initial images showed that Mars has landforms that could have been formed when the climate was much wetter and therefore home to life.

In 1975, the first Viking orbiter was launched and although inconclusive it paved the way for other landers.

Many rovers, orbiters and landers have now revealed evidence of water beneath the crust and even occasional precipitation.

The organic molecules preserved in 3.5 billion-year-old bedrock in Gale Crater — believed to have once contained a shallow lake the size of Florida’s Lake Okeechobee — suggest conditions back then may have been conducive to life.

Future missions to Mars plan on bringing samples back to Earth to test them more thoroughly.

In 2018, Curiosity also confirmed sharp seasonal increases of methane in the Martian atmosphere.

Experts said the methane observations provide ‘one of the most compelling’ cases for present-day life.

The magnitude of these seasonal peaks – by a factor of three – was far more than scientists expected.