An actress from South Korea could face prison time in Thailand for allegedly catching endangered clams during the filming of a TV show, according to reports.

Lee Yeol-eum participated in a diving segment for the June 30 episode of “Law of the Jungle,” a popular South Korean program, Agence France-Presse reported.

“I caught it!” Lee is heard yelling on the show, after pulling giant clams from a coral-laid seabed at a marine park in Thailand, according to the report.

Participants in the show then ate the clams they caught, the Associated Press reported.

Narong Kongeiad, chief of Hat Chao Mai National Park, told the AP he filed charges against Lee this week for violating wildlife laws by hunting the giant clams. She could face four years behind bars.

“The one who must be responsible is the actress who caught the shellfish because she directly violated the law,” he said. “Others who were involved with the incident could also be charged as well. 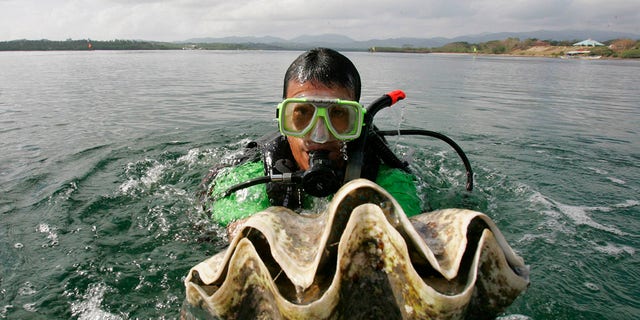 ​​​​​​​A diver holds a giant clam at the launching of a program for the preservation and propagation of the endangered species in the waters of Puerto Princesa City, Palawan province, southwestern Philippines, Feb. 24, 2007.  (Associated Press)

A photo online of Lee picking up the mollusks brought the 23-year-old actress to the attention of authorities, the AFP reported.

The reality show has aired since 2011. It features celebrities testing their survival skills.

The Seoul Broadcasting System, which produces the show, issued an apology Friday.