We sit along an outer arm of a massive, spiraling disk of gas, dust, and a billion stars. In the right place at the right time, you can see it as a spilled-milk streak across the night sky: the Milky Way.

Recently, researchers at theUniversity of Warsaw in Poland measured the distances between thousands of stars and our sun to chart the stars’ three-dimensional coordinates across the Milky Way. The result is an unprecedented large-scale 3D map of the galaxy. And that map shows that the edges of the Milky Way bend slightly, giving it a warped S shape. You can see an animated version of the researchers’ map below.

“Our map shows the Milky Way disk is not flat. It is warped and twisted far away from the Galactic center,”study co-author Przemek Mroz said in a video. “This is the first time we can use individual objects to trace its shape in three dimensions.”

Over the last 50 years, scientists have determined that the Milky Way is not flat like they once thought, but curves at the edges. The first 3D map of the galaxy that showed this warped curve was published inFebruary by researchers from the Chinese Academy of Sciences in Beijing.

The Warsaw team used the same technique as the Beijing scientists for their new map, but factored in data from over 1,000 more stars, some as remote as the boundary of the Milky Way’s disk.

The new map provides a larger-scale picture of our galaxy in more detail.

Mapping distant stars reveals a bend in the galaxy 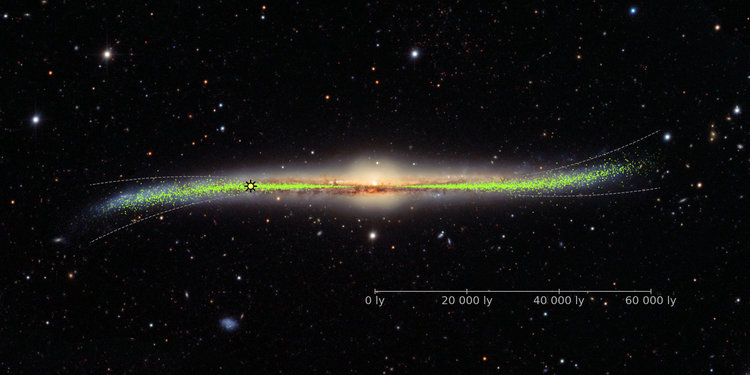 The Milky Way’s disk is not flat, but curves at the edges in an S shape. Our solar system’s location is marked with a sun symbol.J. Skowron / OGLE / Astronomical Observatory, University of Warsaw

The researchers used a telescope at Las Campanas Observatory in Chile to image the entire visible Milky Way over 100 times to make their map.

“The internal structure and history of the Milky Way are still far from being well understood, in part because it is extremely difficult to measure distances to stars in the outer regions of our galaxy,” Dorota Skowron, the study’s lead author, said in the video.

Cepheids are easy to study because they pulsate at regular intervals and burn hundreds (or sometimes thousands) of times brighter than our sun. Researchers can measure the distance of a cepheid star with an accuracy of more than 95% by using the star’s pulsation patterns to determine its luminosity. They can then calculate distance by comparing that luminosity with how bright the star looks from Earth.

So Skowron and her team measured the distances between our sun and 2,400 of these cepheid stars. 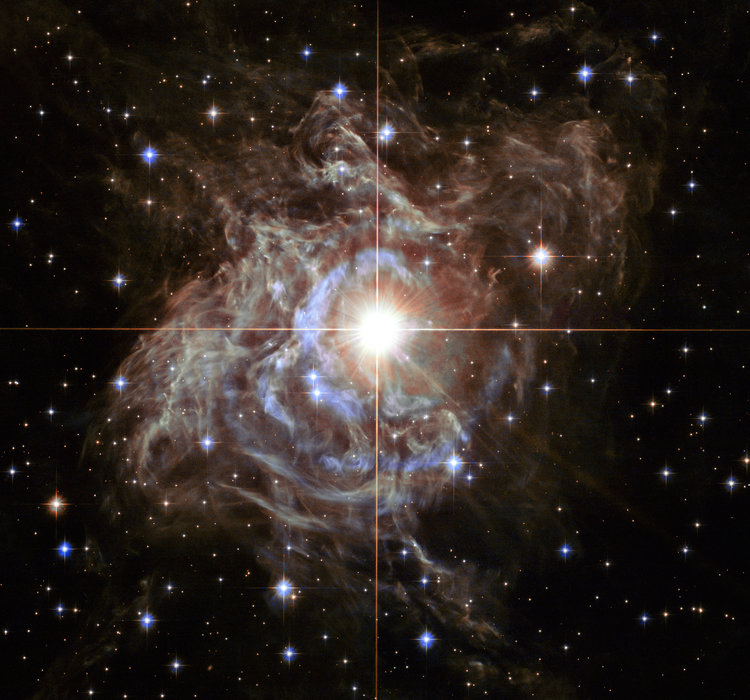 A cepheid star 15,000 times brighter than our sun, as photographed by NASA’s Hubble Space Telescope.NASA, ESA, and the Hubble Heritage Team (STScI/AURA)-Hubble/Europe Collaboration

The locations of these cepheid stars illustrate the way the Milk Way’s disk curves away from its center in more detail and with more precision than ever before.

Other galaxies show similar warping, but scientists still haven’t figured out why. The Beijing researchers thought forces from the Milky Way’s spinning, massive inner disk of stars may have caused the warping, but Mroz suggested other influences that could be at play. 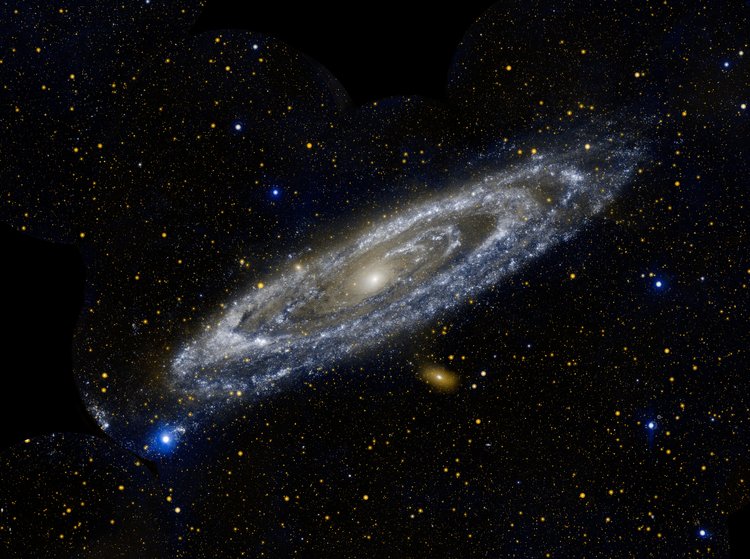 In their observations, the Warsaw researchers also noticed that clusters of similar-aged cepheids follow the shape of the galaxy’s spiral. Younger stars appear to be clustered closer to the middle, and older stars are spread out across the edges.

The researchers guessed that the clustered cepheids may have formed together, so they created a simulation of three waves of star formation to test that theory. The results of the simulation look remarkably similar to the real map.

The image below compares that simulation (left) with the researchers’ actual map of the cepheids (right). The oldest stars, shown in red, are 400 million years old, while the youngest, in blue, are 30 million years old. The little sun symbol marks the location of our own solar system. 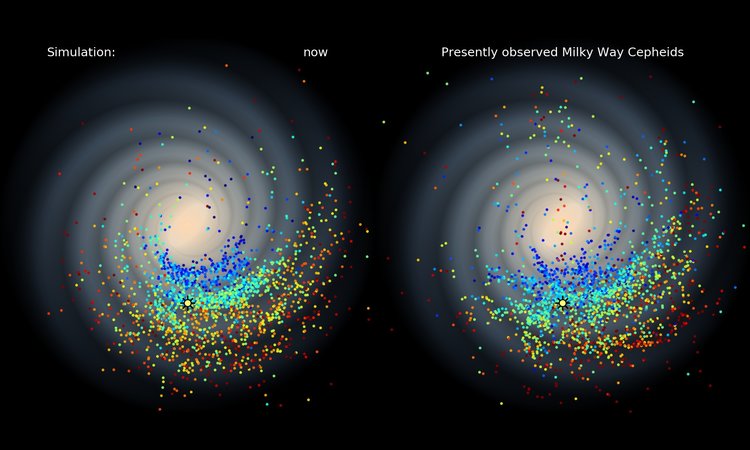 The simulation of star formation (left) as compared to the actual arrangement of stars in the galaxy (right).J. Skowron / OGLE / Astronomical Observatory, University of Warsaw

More research like this to map the ages and locations of stars in the Milky Way could can help scientists piece together how our galaxy formed.