A bag of Facebook’s mail is under quarantine after routine tests on Monday suggested that sarin, a deadly chemical nerve agent, may have been sent to Facebook’s headquarters in Menlo Park.

The Menlo Park Fire Department (MPFD) previouslytold Business Insider that people who work at the warehouse where mail tested positive for sarin are being monitored for possible symptoms of exposure, but so far, no one is showing signs they’ve been hurt. It’s also possible that the mail test was a false positive.

The FBI and National Guard have both been called in to help investigate.

“We have two possible exposures but right now they are not exhibiting any signs or symptoms,” Jon Johnston, the Menlo Park fire marshall toldReuters.

In a statement, Facebook spokesperson Anthony Harrison said, “At 11:00 AM PDT this morning, a package delivered to one of our mail rooms was deemed suspicious. We evacuated four buildings and are conducting a thorough investigation in coordination with local authorities. Authorities have not yet identified the substance found. As of now, three of the evacuated buildings have been cleared for repopulation. The safety of our employees is our top priority and we will share additional information when it is available.”

If anyone at Facebook had been exposed to sarin, that would be a serious issue. Sarin can kill people, especially if their exposure isn’t treated early with antidotes ( medications like atropine and pralidoxime chloride), fresh air, and soap for exposed skin. Evena fraction of an ounce of sarin on the skin can mess with the human nervous system enough to be fatal, according to the US Centers for Disease Control and Prevention (CDC).

A suspected sarin gas attack in Syria last year killed an estimated 40 to 150 people, and injured hundreds of others, as Business Insider’sDave Mosher reported at the time.

What sarin does to people

Sarin was originally developed as a pesticide in Germany in 1938. It’s an odorless substance which is clear, colorless, tasteless, and dissolves easily in water.

People can be exposed to sarin — in either liquid or in gas form — without knowing they’ve come in contact with the chemical. Pure liquid sarin may get onto people’s clothes, and “even a small drop of sarin on the skin can cause sweating and muscle twitching where sarin touched the skin,” theCDC warns.

Other routes of exposure include breathing sarin in the air, or ingesting it when it comes in contact with food or water. Sarin evaporates quickly, but it is the most volatile of nerve agents we know of. In certain doses, sarin can cause convulsions, paralysis, and breathing problems that lead to death. 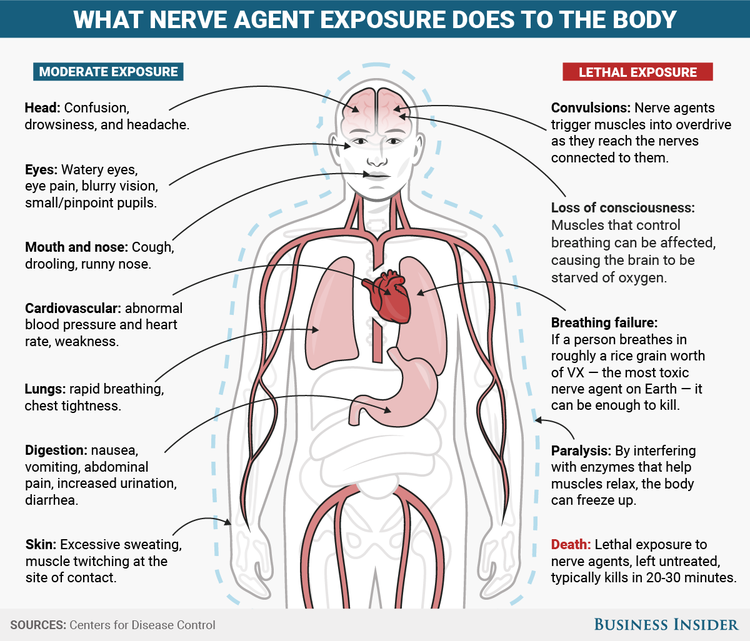 Nerve agents like tabun, sarin, soman, GF, and VX all have similar effects on the body, depending on the route of exposure.Diana Yukari/Business Insider

Lethal sarin exposure can be treated, but people need to get access to antidotes quickly.

Getting away from sarin gas, removing any exposed clothing, and breathing fresh air are some of the best things an exposed person can do immediately to up their odds of recovering from a dangerous sarin attack. Sarin is heavier than air, so seek high ground, and “wash any liquid sarin from the skin with large amounts of soap and water,” the CDC recommends. 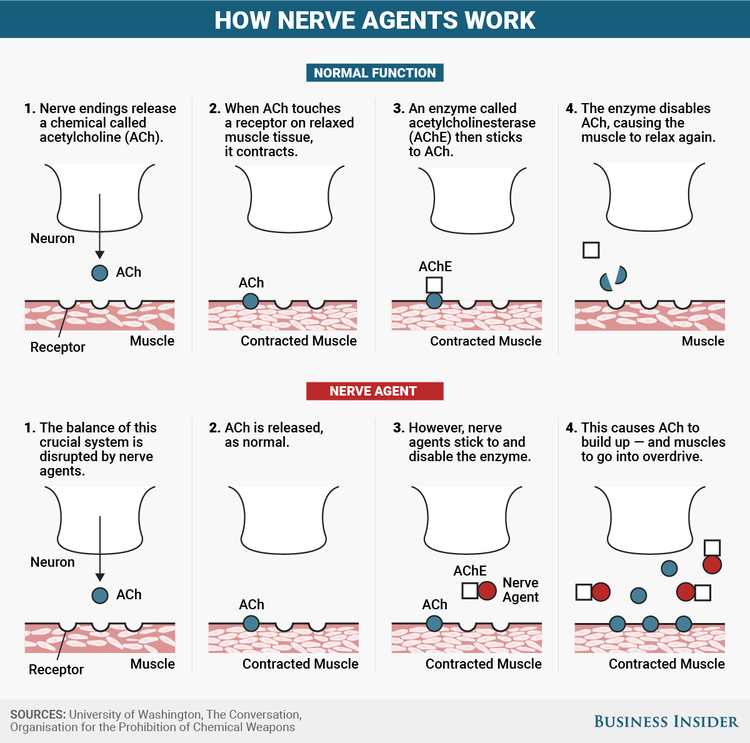 Nerve agents like tabun, sarin, soman, GF, and VX all target the connections between nerves and muscles.Diana Yukari/Business Insider