On Thursday, NASA’s new big rocket, the Space Launch System, will make a second attempt to not go anywhere.

This test, called a hot fire, is a crucial step for the rocket, which has been in development for more than a decade. The four engines on the booster stage will ignite and run through the paces of what they would do during an actual launch to orbit — but while firmly held down on Earth.

The first time NASA attempted this hot fire test in January, the engines rumbled to life. But instead of firing for eight minutes, the rocket’s computer shut down the engines after only about one minute.

Engineers decided they needed a do-over, and today is the day for that.

When is the test and how can I watch it?

The rocket is currently scheduled to ignite its engines as early as 3 p.m. Eastern time on Thursday. NASA has a two-hour window during which it can attempt the test fire.

The test will be streamed live on NASA Television, with coverage beginning about 30 minutes before the rocket is lit.

But this testing time could be changed. During the last test-fire event in January, the agency briefly moved its test time forward, saying it was running ahead of schedule, before shifting the operation back later in the day.

What is the Space Launch System, and why does NASA say it needs the rocket?

The Space Launch System is the 21st-century equivalent of the Saturn 5 that took NASA astronauts to the moon in the 1960s and 1970s. Although there are many other rockets available today, they are too small to launch spacecraft that can carry people to the moon. A possible exception is SpaceX’s Falcon Heavy, but a human lunar mission would require two separate launches carrying pieces that would then dock together in space or head separately to the moon.

The Falcon Heavy can lift up to 64 metric tons to low-Earth orbit. The initial version of the S.L.S. is a bit more powerful, capable of lifting 70 metric tons, and future versions of the rocket will be able to loft up to 130 metric tons, more than the rockets that carried the Apollo astronauts to the moon.

Although the Space Launch System will be expensive — up to $2 billion a launch for a rocket that can be used only once — Congress has provided steadfast financial support for it so far. Supporters maintain that it is important for the government to own and operate its own powerful deep-space rocket, and pieces of the system are built by companies across the country, spreading the economic benefits to many states and congressional districts.

The Space Launch System is a key component for Artemis, the program to take NASA astronauts back to the moon in the coming years. Although former President Donald J. Trump pledged to make the trip by the end of 2024, few expected that NASA would actually meet that timeline, even before President Biden was elected.

What will happen during the hot fire test?

During a full eight-minute test, the four engines will generate more than two million pounds of thrust. But NASA officials say they need the test to run only at least four minutes to generate the data they want. The engines will also do more than fire during the test, performing a range of activities such as throttling the thrust up and down and swiveling the direction of the nozzles.

The booster stage — NASA calls it the core stage — is mounted on a giant test stand at Stennis Space Center in Mississippi. The same test stand was used in the 1960s to test the first stages of the Saturn 5. The structure was also used during development of the space shuttles.

Because of the size of the Space Launch System core stage — more than 200 feet tall and 27.6 feet wide — the test stand has been modified with an additional steel superstructure.

The engines in the S.L.S. core stage are not new, but are the ones that were used by the space shuttles. This used, space-flown hardware was refurbished and upgraded for use on the new rocket.

What happened during the last test, and what else could go wrong? 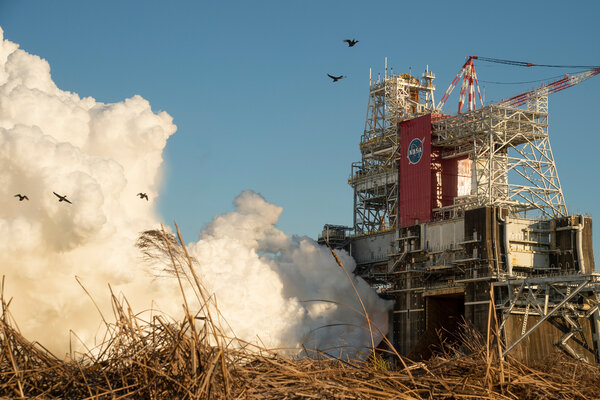 The engines shut down early — after only 67 seconds — and as a result, NASA decided it wanted to collect more data to verify that the rocket would perform properly during a real launch.

Because the same core stage is to be launched with no astronauts aboard later this year, engineers needed to make sure that the test would not damage this section of the rocket. As a result they set some parameters as “conservative” that would stop the test if something was not right. That occurred with the power unit that swivels the nozzle on one of the engines, although officials said it would not have caused a problem during an actual launch.

A second error, indicating a “major component failure” on a different engine, was unrelated and would not have caused the test to halt or posed a problem during a launch. Because of this flaw, a faulty piece of electronic equipment was replaced.

Engineers are confident that they fixed the issues from the first step, but other glitches could occur.

A worst case would be if a malfunction led to destruction of the booster. That would add years of delay to the program and renew calls for NASA to consider alternatives.