560 million-year-old fossil of a primitive jellyfish unearthed in Leicester and named after Sir David Attenborough was the first animal predator on Earth, study claims

The fossil of the earliest known animal predator – which was unearthed in Leicester – has been named after Sir David Attenborough.

Called Auroralumina attenboroughii, the 560-million-year-old primitive jellyfish was found in Charnwood Forest, near Leicester — a city with which Sir David has long-established links.

The 96-year-old, who used to go fossil hunting in the area, and is credited with raising awareness of Ediacaran fossils in the forest, said he was ‘truly delighted’.

Researchers say the specimen is the first of its kind, and is thought to be the earliest creature to have a skeleton.

The creature was about seven inches tall and would have been tethered to the seabed on a beige ‘stalk’, using flame-coloured tentacles to catch food.

The first part of the name is Latin for dawn lantern, in recognition of its great age and resemblance to a burning torch. 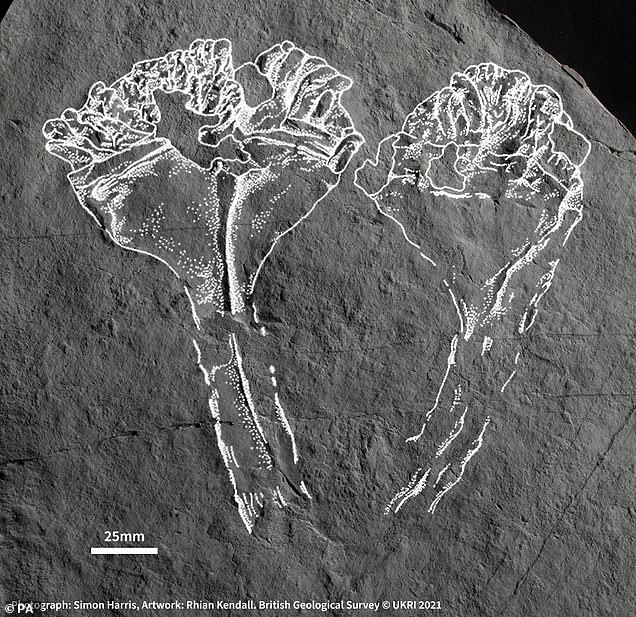 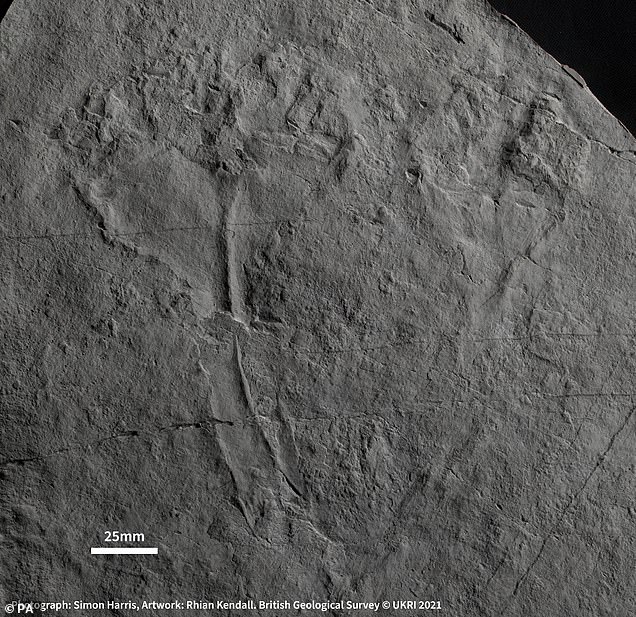 Slice of history: The fossil of the earliest known animal predator (pictured) – which was unearthed in Leicester – has been named after Sir David Attenborough 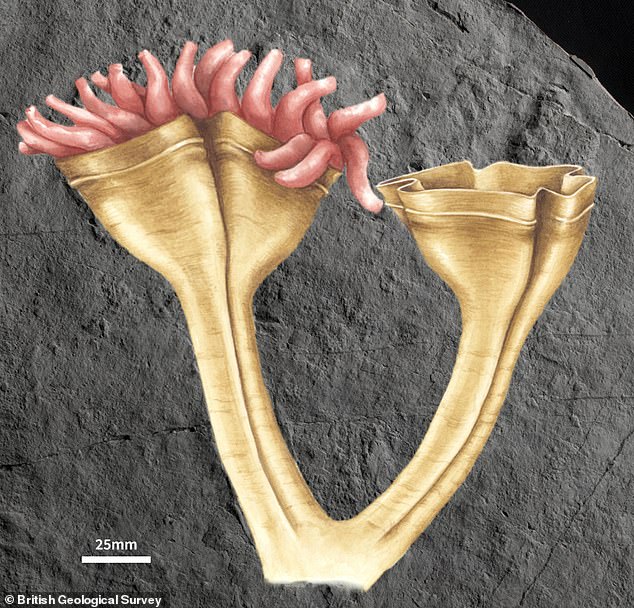 Called Auroralumina attenboroughii, the 560-million-year-old primitive jellyfish (shown in an artist’s impression) was found in Charnwood Forest, near Leicester — a city with which Sir David has long-established links. 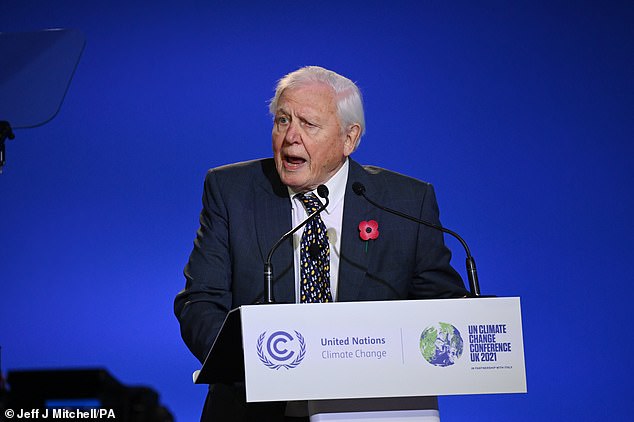 The 96-year-old (pictured), who used to go fossil hunting in the area, and is credited with raising awareness of Ediacaran fossils in the forest, said he was ‘truly delighted’

Auroralumina attenboroughii is not the first creature to be named after Sir David Attenborough.

A new species of frog-legged beetle that lived nearly 49 million years ago in what is now Garfield County, Colorado, was also given the iconic naturalist’s name.

Pulchritudo attenboroughi, or ‘Attenborough’s beauty,’ was announced in August 2021 in the journal Papers in Palaeontology, though a fossil of the prehistoric creature has been on display in the Denver Museum of Nature & Science since 1995.

Sir David said: ‘When I was at school in Leicester I was an ardent fossil hunter.

‘The rocks in which Auroralumina has now been discovered were then considered to be so ancient that they dated from long before life began on the planet.

‘So I never looked for fossils there. A few years later a boy from my school found one and proved the experts wrong.

‘He was rewarded by his name being given to his discovery. Now I have – almost – caught up with him and I am truly delighted.’

That specimen was found by Roger Mason, after whom Charnia masoni was named.

He and a group schoolboys were rock climbing in a Charnwood Forest quarry in 1957 when they made their discovery.

Dr Phil Wilby, palaeontology leader at the British Geological Survey, is one of the scientists who made the latest find.

He said: ‘It’s generally held that modern animal groups like jellyfish appeared 540 million years ago in the Cambrian explosion.

‘But this predator predates that by 20 million years. It’s the earliest creature we know of to have a skeleton.

‘So far we’ve only found one, but it’s massively exciting to know there must be others out there, holding the key to when complex life began on Earth.’

According to the study, the creature is related to the group that includes corals, jellyfish and anemones living on Earth today.

In 2007 Dr Wilby and others spent more than a week cleaning a 100 metre square rock surface with toothbrushes and pressure jets.

In a rubber mould of the entire surface – which captured more than 1,000 fossils – one stood out.

Dr Frankie Dunn, of the Oxford University Museum of Natural History, said: ‘This is very different to the other fossils in Charnwood Forest and around the world.

‘Most other fossils from this time have extinct body plans and it’s not clear how they are related to living animals.

‘This one clearly has a skeleton, with densely-packed tentacles that would have waved around in the water capturing passing food, much like corals and sea anemones do today.

‘It’s nothing like anything else we’ve found in the fossil record at the time.’

Dr Dunn dubbed A. attenboroughii a ‘lonely little fossil’. It originated from shallower water than others found in Charnwood.

She said: ‘The ancient rocks in Charnwood closely resemble ones deposited in the deep ocean on the flanks of volcanic islands, much like at the base of Montserrat in the Caribbean today. 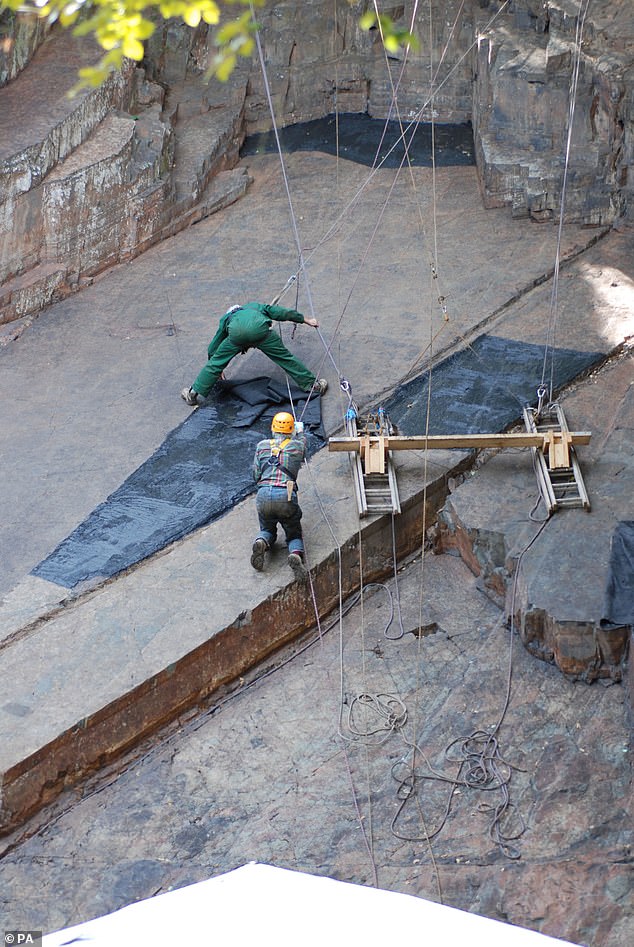 In 2007 Dr Wilby and others spent more than a week cleaning a 100 metre square rock surface with toothbrushes and pressure jets. In a rubber mould of the entire surface – which captured more than 1,000 fossils – one stood out 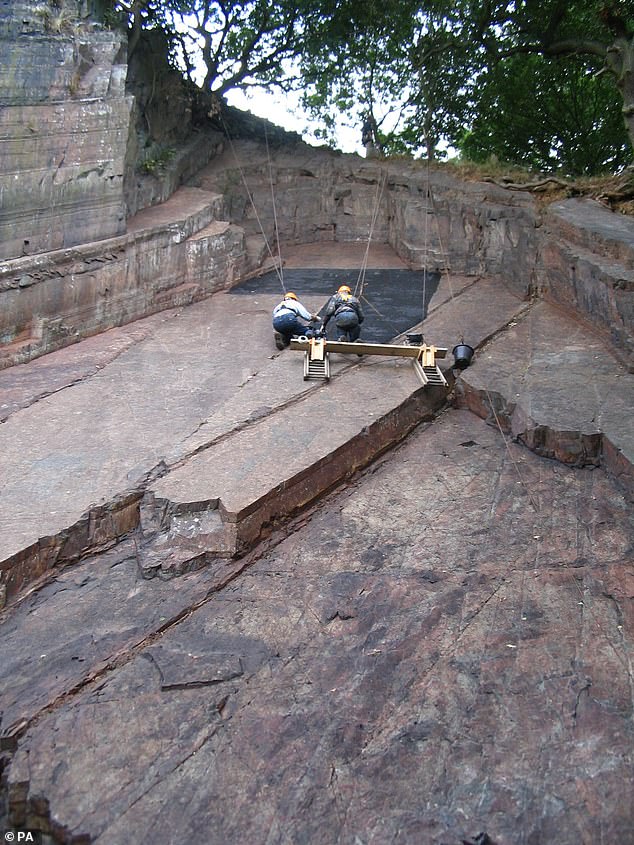 A. attenboroughii was dated at the British Geological Survey’s headquarters using zircons in the surrounding rock

‘All of the fossils on the cleaned rock surface were anchored to the seafloor and were knocked over in the same direction by a deluge of volcanic ash sweeping down the submerged foot of the volcano, except one, A. attenboroughii.

‘It lies at an odd angle and has lost its base, so appears to have been swept down the slope in the deluge.’

A. attenboroughii was dated at the British Geological Survey’s headquarters using zircons in the surrounding rock.

Zircon is a tiny radioactive mineral that acts as a geological clock because it allows geologists to assess how much uranium and lead are present. From that, they can determine precisely how old the rock is.

Dr Dunn said: ‘The Cambrian Explosion was remarkable. It’s known as the time when the anatomy of living animal groups was fixed for the next half a billion years.

‘Our discovery shows that the body plan of the cnidarians was fixed at least 20 million years before this, so it’s hugely exciting and raises many more questions.’

The finding is reported in Nature Ecology and Evolution.

It looks like a magnolia and would not be out of place in any front garden.

But this flower is the mother (and father) of every flowering plant living today and was gazed upon by the dinosaurs 140 million years ago.

No fossils this old have ever been found, so scientists recreated it by analysing every plant family on Earth over six years.

We now know the flowers in our gardens come from this one bloom, with three separate whorls of layered petals and both male and female reproductive organs.

Its petals lie open because its main pollinator was probably a beetle, with bees only just evolving at that time and yet to require tubular flowers like snapdragons. 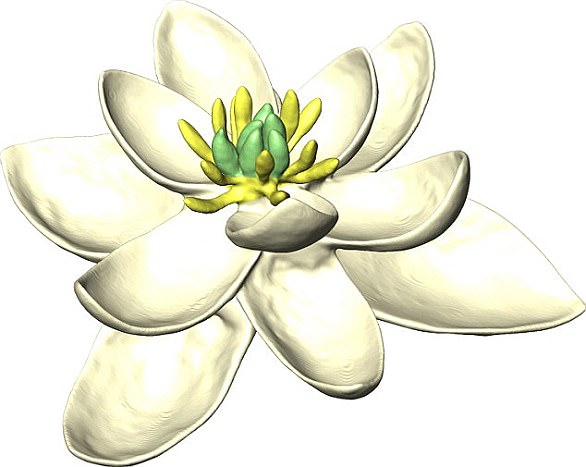 It looks like a magnolia and would not be out of place in any front garden. But this flower is the mother (and father) of every flowering plant living today and was gazed upon by the dinosaurs 140 million years ago

Flowering plants appeared on our planet relatively recently, brightening up a drab landscape previously dominated by ferns, horsetails and mosses.

They now represent 90 per cent of all land plants, and scientists claim this is the most accurate picture of their common ancestor produced yet.

Dr Emily Bailes, who worked on the study, said: ‘This is the best representation so far of the flower which is parent to every modern flower we see today, and would have existed while the dinosaurs were still on the planet, which is really exciting.

‘It has three concentric circles of petal-like organs, unlike the majority of plants today. We don’t know for sure what colour this flower would have been, but I think it is quite pretty.’

The origin of early flowering plants, called angiosperms, remains one of the biggest puzzles in biology, almost 140 years after Charles Darwin called their rapid rise in the Cretaceous period ‘an abominable mystery’.

The picture published in journal Nature Communications looks unlike anything we have today or any of the ideas previously proposed.

It has three whorls, or concentric circles of petals, rather like the magnolia it resembles, which makes it unusual among modern-day plants.

Only around 20 per cent now match this, with plants typically having fewer layers, such as the two whorls seen in lilies.