The earliest ever cave art showing humans hunting down animals has been found in Indonesia and dates back almost 44,000 years ago.

It shows a group of part-human, part-animal figures, known as therianthropes, hunting large mammals with what is believed to be either spears or ropes.

The cave art was created during the Late Pleistocene era by early humans and pre-dates the other human-animal cave art in Europe by around 23,000 years.

A total of at least eight humans – some with beaks and tails – appear in the bright red artwork which is incredibly well-preserved.

The bizarre anthropomorphised creatures in the art work are thought to be the first example of Homo sapiens using art to convey abstract thought and imagination. 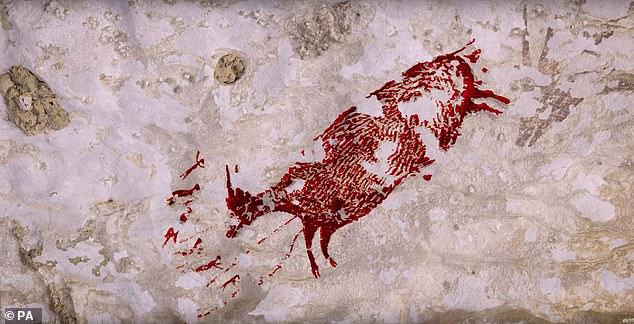 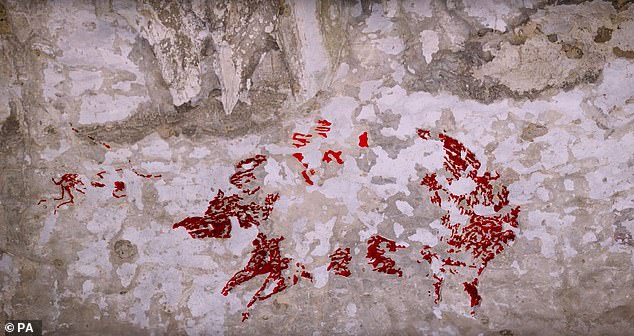 The bizarre human-like creatures (left, hunting a pig, right)) depicted in the art are examples of the ancient humans conveying complex and abstract narratives through the creation of mythical figures, a cognitive function that only evolved as Homo sapiens became more intelligent

The team of archaeologists, led by Griffith University in Australia, who made the find say it sheds new light on the origin of modern human cognition.

Hunters could have been drawn as human, but the presence of therianthropes in the art could be the oldest known proof of the human skill to imagine the supernatural.

It was found inside a limestone cave – called Leang Bulu’ Sipong 4 – on the island of Sulawesi in 2017.

Three years earlier, the same group of researchers found one of the world’s oldest rock art motifs, a sprayed red outline of a human hand which is at least 40,000 years old.

Dr Brumm said: ‘The images of therianthropes at Leang Bulu’ Sipong 4 may also represent the earliest evidence for our capacity to conceive of things that do not exist in the natural world, a basic concept that underpins modern religion.’

Previous examples of human and animal interactions dated only as far back as 21,000 years, with the famed Upper Palaeolithic cave art of Europe.

Predating these iconic pieces of prehistoric art by more than 20,000 years, the Sulawesi art has the potential to rewrite our understanding of human intelligence. 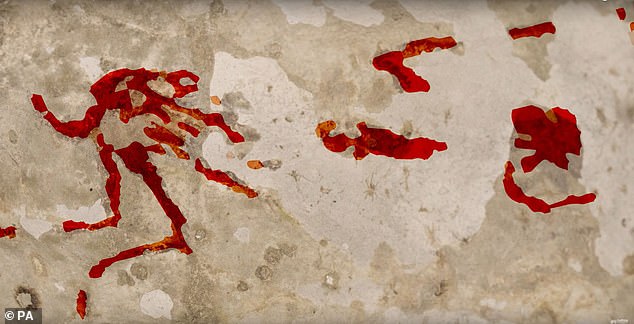 Previous examples of human and animal interactions dated only as far back as 21,000 years, with the famed Upper Palaeolithic cave art of Europe. The presence of human-like paintings (pictured) from 44,000 years ago rewrites the history of human cognition 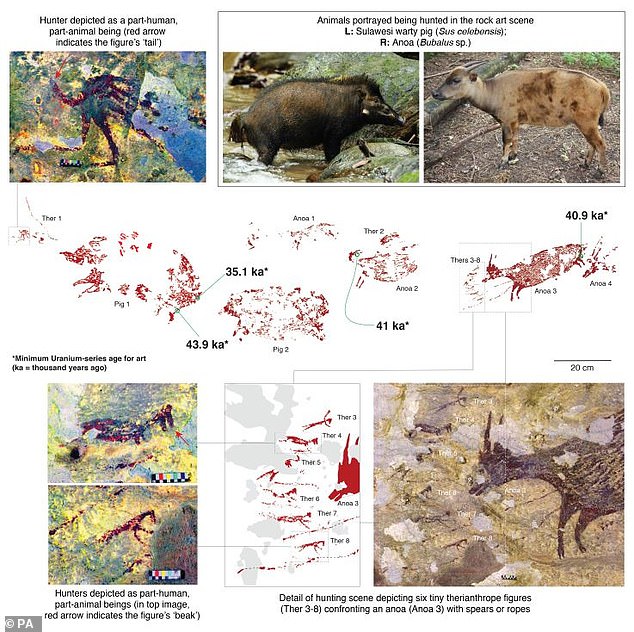 Part-human creatures were drawn with tails and beaks, while the paint use to make them and the animals revealed the pigment was used at the same time and dates as far back as 43,900 years ago 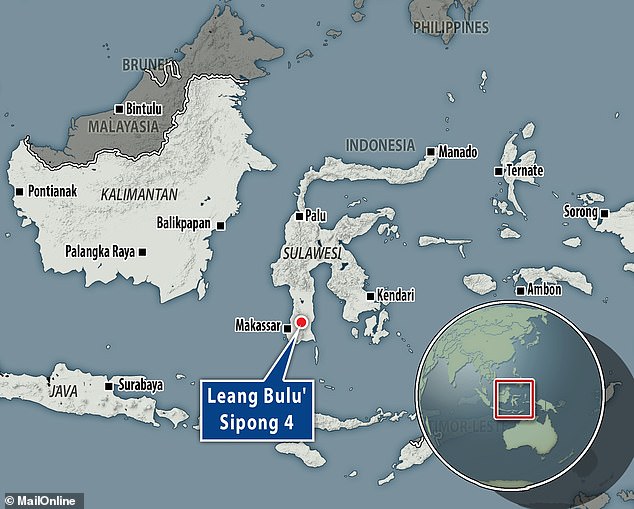 It is believed the humans and the animals were painted at the same time as they are done in the same artistic style using the same technique and dark red pigment.

They also all show similar states of weathering.

Researchers behind the study suggest the inclusion of therianthropes may indicate that Indonesian cave art involved religious-like thinking focused around the human-animal connection.

Professor Aubert said: ‘The cave painting from Leang Bulu’ Sipong 4 suggests that there was no gradual evolution of Palaeolithic art from simple to complex around 35,000 years ago – at least not in Southeast Asia.

‘All of the major components of a highly advanced artistic culture were present in Sulawesi by 44,000 years ago, including figurative art, scenes, and therianthropes.’

WHERE CAN CAVE ART BE FOUND?

The most famous cave art can be found in Spain and France, but it exists throughout the world.

The famed Upper Palaeolithic cave art of Europe dates back to around 21,000 years ago.

In recent years scholars have recorded cave art found in Indonesia that is believed to be about 40,000 years old – predating the most popular European cave art. 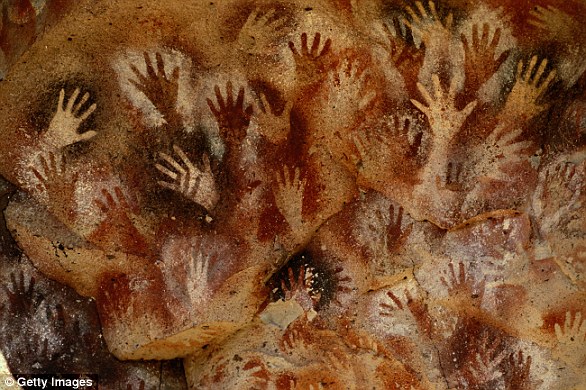 The new report’s author, Shigeru Miyagawa, explained in the analysis the pervasiveness of cave drawings.

He said: ‘Cave art is everywhere. Every major continent inhabited by homo sapiens has cave art.

‘You find it in Europe, in the Middle East, in Asia, everywhere – just like the human language.’