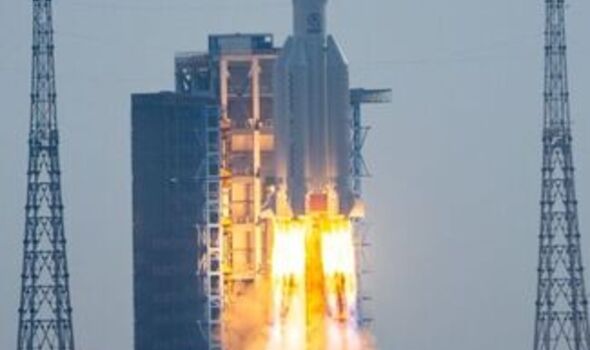 A 21-tonne Chinese rocket is poised to make a crash landing as it falls spectacularly back down to Earth, but experts are trying to determine the path it will take when it re-enters the planet’s atmosphere. The Long March 5B rocket booster, which is the same size as a 10-storey building, was first launched on October 31 on a mission to bring the third and final modular to China’s Tiangong Space Station. Now, the rocket is set for a so-called uncontrolled re-entry on Saturday, with experts still unable to determine where exactly it will land due to the Chinese not sharing such details. While the risk of it causing danger to a population is slim – NASA Administrator Bill Nelson said in July that providing this kind of information is vital to “ensuring the safety of people here on Earth”.

But, because China did not perform what is known as a controlled de-orbit of the rocket’s core stage it means that once again a Chinese rocket will wildly plummet back down to Earth after a launch.

And this is not the first time experts have been left scratching their heads over where a Chinese rocket will land following a space mission. Normally, the core stages of similar rockets that reach orbit fire their engines back up after releasing their payloads.

This means that they can be aimed at unpopulated areas, usually in the middle of an ocean, when they come plunging back down to Earth from orbit. But so far, no launches with the Long March 5B have been anywhere near as controlled.

Back in July, another Long March booster was also sent tumbling back to Earth without China sharing any information about the trajectory the rocket would take on its way down.

Ted Muelhaupt, a consultant with The Aerospace Corporation’s Corporate Chief Engineer’s Office, said at a briefing Wednesday: “For those who’ve been tracking the previous versions of this: Here we go again.”

Speaking at the meeting discussing the rocket crash and what can be done to prevent future incidents of this nature, he added that “88 percent of the world’s population is at risk, and so 7 billion people are at risk” of the rocket falling on them.

But he added: “The answer is that you’ve got far better odds of winning the lottery tonight than you are getting hit by this object. The risk to an individual is six per 10 trillion. That’s a really small number.”

NASA Administrator Bill Nelson said in July, the previous time China did not share information about the rocket’s trajectory that providing this kind of information is vital to “ensuring the safety of people here on Earth”.

Experts have warned that there is currently still too much uncertainty in the data and models to make an accurate prediction of where the current rocket poised to plunge back down to Earth will go.

Gregory Henning, Project Leader at The Aerospace Corporation’s Center for Orbital Debris and Reentry Studies (CORDS) told DailyMail.com: “As the rocket body’s altitude decreases and the reentry approaches, the window will shrink, and will begin to reveal locations that will not be the landing site. But the exact location will not be known until it actually enters.”

The core stage of the Long March 5B rocket has a mass of more than 20 metric tons, meaning huge bits of metal will likely blast into the Earth’s surface when it makes its return.

Chinese state media has denied that the rocket will even make it back to Earth, claiming that the core stage would completely burn up in Earth’s atmosphere on re-entry.

This is despite the fact that with previous launches of this rocket type, in 2020, 2021, and 2022, big chunks of space junk  came plummeting down into villages in the Ivory Coast, the Indian Ocean, and near villages in Borneo. But luckily, no one was injured or killed by the space debris.

The Mengtian module is designed to function in space for 10 years, according to state media in China, and one of its first uses will be an experiment involving testing how seeds grow after being exposed to microgravity and the radiation of space.