Astronomers have discovered the brightest object in the Universe and it dates back to almost the beginning of time.

The fantastic luminosity of the distant quasar is equivalent to 600-trillion suns and was found using the Hubble telescope.

Data was collated from NASA,the ESA and the Gemini North telescope in Hawai’i.

Collectively it provides an insight into the birth of galaxies when the Universe was only a billion years old.

Scientists claim it is by far the brightest quasar yet discovered in the early universe.

The fantastic luminosity of the distant quasar is equivalent to 600-trillion suns and was found using the Hubble telescope. Data was collated from NASA,the ESA and the Gemini North telescope in Hawai’i

A quasar is the extremely bright nucleus of an active galaxy and its powerful glow is created by the incredible amounts of energy released by gas falling toward the supermassive black hole at its centre.

Light from the quasar serendipitously passed near a galaxy between Earth and the source on its path to us, scientists found.

This massive object has a significant gravitational pull which ‘bent’ the light and magnified it in Earth’s direction.

The magnifying galaxy is relatively close, compared to the ultra-bright ancient quasar, at only 6 billion light years away.

‘If it weren’t for this makeshift cosmic telescope, the quasar’s light would appear about 50 times dimmer,’ said Xiaohui Fan of the University of Arizona who led the study.

‘This discovery demonstrates that strongly gravitationally lensed quasars do exist despite the fact that we’ve been looking for over 20 years and not found any others this far back in time.’

Calculations found that the light had been significantly ‘redshifted’ – a phenomenon where the wavelength of a beam of light expands over vast amounts of time and distance.

WHAT IS A QUASAR?

‘Quasar’ is short for quasi-stellar radio source, and describes bright centres of galaxies.

All galaxies have a supermassive black hole at their cores.

When the inflow of gas and dust to this black hole reaches a certain level, the event can cause a ‘quasar’ to form – an extremely bright region as the material swirls around the black hole.

They are typically 3,260 light-years across.

These regions emit huge amounts of electro-magnetic radiation in their jets, and can be a trillion times brighter than the sun.

But they last only 10 to 100 million years on average, making them relatively tough to spot in galaxies that are several billion years old.

The rapidly-spinning disk spews jets of particles moving outward at speeds approaching that of light.

These energetic ‘engines’ are bright emitters of light and radio waves.

A red shift value of 6.51 is one of the largest recorded by astronomers and helped to closely estimate the age of the quasar.

Gemini data contained the tell-tale signature of magnesium which is critical for determining how far back in time we are looking as well as aiding in the determination of the mass of the black hole powering the quasar.

‘When we combined the Gemini data with observations from multiple observatories on Maunakea, the Hubble Space Telescope, and other observatories around the world, we were able to paint a complete picture of the quasar and the intervening galaxy,’ said Feige Wang of the University of California, Santa Barbara, who is a member of the discovery team. 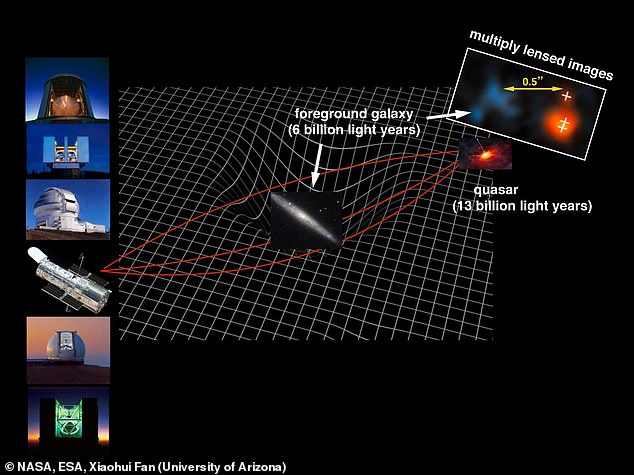 The newly discovered ancient quasar, catalogued as J043947.08+163415.7 or J0439+1634 for short, is so old that the light being received from it started its journey 13 billion years ago. Light from the quasar passed near a galaxy between Earth and the source on its path to us which bent the light and acted as a magnifying glass (pictured)

The data shows that the quasar may be producing up to 10,000 stars per year, scientists said.

This compares to the Milky Way which produces about one new star every year.

Xiaohui Fan said he did not expect to find many quasars brighter than this in the whole universe.

He added: ‘That’s something we have been looking for a long time.

‘We don’t expect to find many quasars brighter than that in the whole observable universe.’

Co-author Fabian Walter, of the Max Planck Institute for Astronomy in Germany, said it was a prime candidate for further investigation.

He added: ‘Its properties and its distance make it a prime candidate to investigate the evolution of distant quasars and the role supermassive black holes in their centres had on star formation.’

Earth’s atmosphere made deciphering the images difficult and only by using Hubble were scientists able to identify the quasar image is split into three components.

Despite its brightness Hubble was only able to spot the quasar with the help of strong gravitational lensing caused by a dim galaxy between the quasar and the Earth.

The galaxy bent the light from the quasar making it appear three times as large and 50 times as bright as it would have been without the effect of gravitational lensing, astronomers said.

Despite this only Hubble’s sharp vision allowed astronomers to discover the quasar.

Scientists will begin gathering data on the quasar including using the European Southern Observatory’s Very Large Telescope to try to identify the chemical composition and temperatures of intergalactic gas in the early universe.

The team also hope to use the Atacama Large Millimetre/Submillimetre Array and Nasa/ESA/CSA James Webb Space Telescope due to be launched in 2021 to look at the supermassive black hole and directly measure the influence of its gravity on the surrounding gas and star formation.