Lizzo’s Instagram bio currently states she is a “Bop Star” and it’s quite hard to disagree with that statement, isn’t it? Since breaking through into the mainstream, the “Juice” entertainer has released hit after hit and taken home many prestigious awards.

As of this writing, Lizzo has won three Grammy Awards and was honored with the Entertainment of the Year title at the 2020 NAACP Image Awards, per IMDb. On the U.S. Hot 100, the “Hustlers” actor earned her first No. 1 single, “Truth Hurts,” in 2019 and received a platinum plaque by RIAA for her latest album “Cuz I Love You,” as it has sold over 1 million copies in the U.S. alone.

Lizzo hasn’t said too much about her follow-up album, but has revealed she would love to work with fellow Grammy Award winner Harry Styles. In April, the singer went live on Instagram and teased a potential collab with the former One Direction member. “New music is motherf**king coming,” she said, per Ace Showbiz. “‘Are you and Harry going to collab?’ I have a collab with him this weekend. I’m going to call him.” She also insisted she has written the perfect song for Rihanna to join her on. “Rihanna is busy but you know what is crazy? I have been wanting to hit her up,” Lizzo expressed.

With that being said, a new era from Lizzo is on its way as she has announced her new single. Keep reading to find out more. 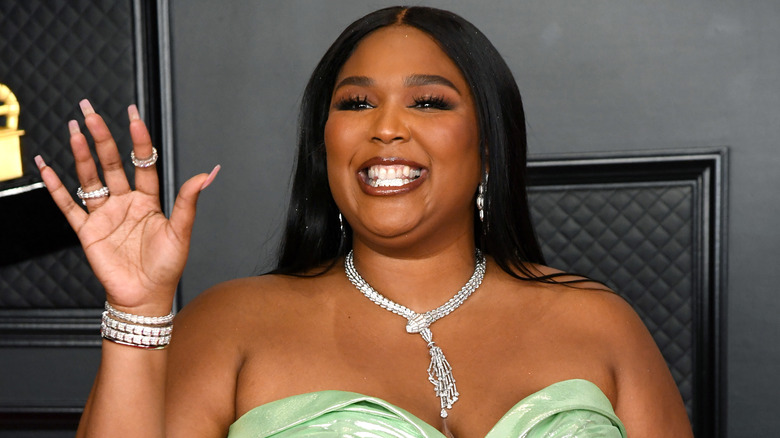 On August 1, Lizzo warned fans on Instagram that something was coming. She posted a plain blank photo that had the white text “SHHHHHHHH” written with the “shh” emoji. “Don’t even like this post cus you REALLY gon like my post tomorrow #shhhhhhhhhhhh,” Lizzo captioned her post. The following day, the “Good As Hell” hitmaker took to Instagram and shared the official artwork for her new single. Titled “Rumors,” the rapper looked very glam on the cover, wearing what looked to be a gold, jeweled dress with no straps. Lizzo rocked acrylic nails and accessorized herself with eye-catching gold ear earrings and bangles. The award-winning star wore her dark straight locks down and gazed directly at the camera lens while sporting a “shh” pose.

“NEW ERA B**CH. ‘RUMORS’. 8/13,” she wrote in capital letters, informing her fan base that they will be able to hear the new song in a couple of weeks on August 13. Unsurprisingly, the post caught the attention of many of Lizzo’s 10.9 million followers, who were instantly excited about new music. “YAAAAAAAAAY!!!!!!!!!!!” one user wrote. “hold on lemme go to sleep for two weeks cuz i can’t,” another person shared. “OH MY GOD,” remarked a third fan. We can’t wait!