What’s really going on with Kim Kardashian West and Kanye West in the wake of their divorce? As fans of the famous couple will know, Kim called time on their almost seven year marriage when it was revealed in February that she’d filed for divorce after months of rumors suggesting their marriage was on the rocks.

At the time, a TMZ insider claimed their split was “as amicable as a divorce can be” and noted that the two were “committed to co-parenting together,” as they share four children, North, Saint, Chicago, and Psalm.

The two appeared to have confirmed that report multiple times since then. The reality star and her estranged husband have been spotted spending time together with their children and it’s also been claimed Kim has no plans to drop West from her last name in the wake of their divorce, despite West’s filing to officially change his name to simply, “Ye.”

But the former couple really had fans talking again on August 26 when Kim made a special appearance at one of West’s “Donda” album listening party events. The star had previously showed her support by watching on from the audience, but this appearance took things to a whole new level that had fans speculating about what’s really going on between the co-parents.

Read on for what you need to know and why it involves a wedding dress and veil. 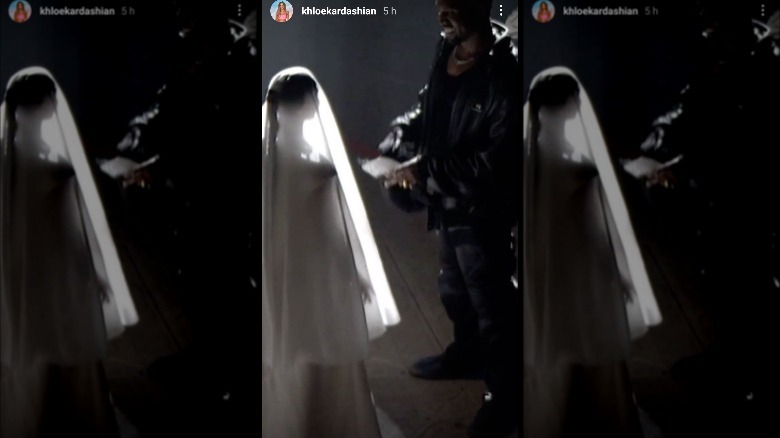 Kim Kardashian appeared at Kanye West’s “Donda” event in Chicago on August 26 wearing a wedding dress. Yes, a wedding dress. According to TMZ, Kim donned the all-white ensemble and veil to appear alongside a setup made to look like the rapper’s childhood home during the final song of the evening, titled “No Child Left Behind.” Footage also emerged on social media of the two appearing to leave the event together, seemingly holding hands.

Fans at the event reportedly went crazy when Kim stepped out, and that excitement clearly spilled over onto social media as word got out about the somewhat bizarre appearance. Plenty of fans speculated that the wedding stunt may have been a sign the two could have been giving their marriage another go. “So Kim K and Kanye are continuing their marriage?” one person asked, as another tweeted, “did kanye and kim k just get back together?!” However, it sounds like fans shouldn’t get too excited about the possibility of a reconciliation.

According to TMZ’s source, the couple are not getting back together and Kim’s wedding dress display was just her way of showing her ex that she supports him and his work. They claimed Kim was supposedly “happy to do it,” while E! reported the moment was also a hit with Kim’s sisters, Kylie Jenner, and Khloé Kardashian, who reacted on social media. Khloé even shared a photo of the moment to her Instagram Stories. 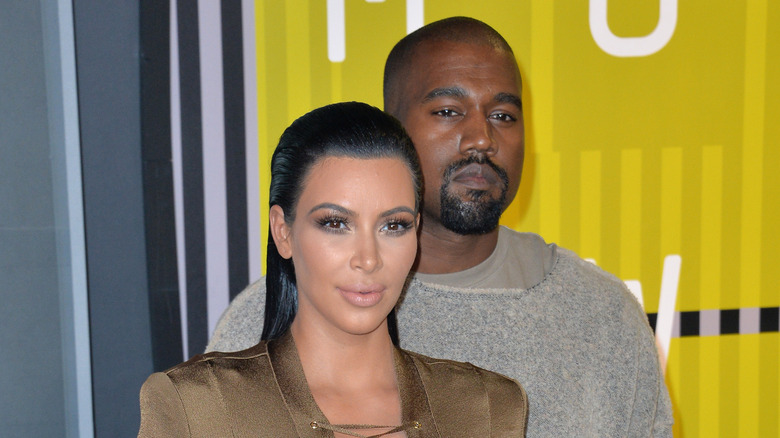 Kanye West is still yet to officially release his new album “Donda” — named after his late mother, Donda West – into the world, despite the multiple events he’s now hosted to promote it. However, there have been reports that at least one of the songs references his relationship with Kim Kardashian.

One song on the album, thought to be titled “Lord I Need You,” seemingly has West claiming he believes his estranged wife is still in love with him in the wake of her divorce filing (via People). The star debuted the song at a “Donda” event in Atlanta on August 5, rapping, “Time and space is a luxury/But you came here to show that you’re still in love with me.” West also performed new lyrics to another song thought to be about Kim, titled “Love Unconditionally,” in which he raps about losing his family.

An E! source suggested there was a time there was some “tension” between the two — potentially while West was writing his album — but claimed in August that all that had now “subsided” and the former couple are now “good friends.” They added a few days before Kim’s wedding dress appearance at West’s event that she “has been very supportive of Kanye’s new album and he appreciates it. He’s shared his music and ideas with Kim from the start.”