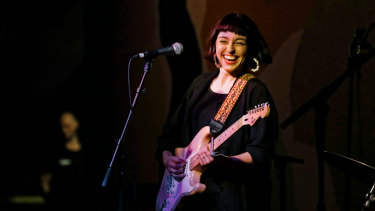 The Vivid Festival billed Stella Donnelly as a "star in the making" and the second of her three shows proved the claim was as genuine as one of her songs.

The 27-year-old from Perth has grown hugely as a performer in the two years between her first EP and March's debut album, Beware Of The Dogs, as evident in this night's performance of the breakthrough song that graces both, Boys Will Be Boys.

The indictment of excuse-making and victim-blaming around a friend's sexual assault accidentally became a #MeToo anthem when, as Donnelly reminded us, it was released three days before movie mogul Harvey Weinstein "started getting called out online".

Thirteen months ago Donnelly stood on a stage across town and performed the song poker-faced, as if she felt the lyrics and the anger that informed them were enough to propel a movement in its first flush.

On this night, she made the song so convincing, it didn't need fluke timing to help get it noticed.

Played alone on electric guitar, there was a furious bearing down on the notes in a lyric like "you invaded her magnificence". There was more stridency in her strumming. More melismatic thrills in the chorus, which soared and could not be ignored.

There was even a smile at battles won while singing the closing pay-off to her pals'  tormentor: "Time to pay the f—ing rent."

The solo set that opened this show contained a few more songs that repeated Boys' trick. The title track of the new album, for instance, drew us in with its pretty, classically trained singing and beguiling melody, then stunned us with venomous protest.

"All these pious f—s/Taking from the 99," Donnelly sang, a post-election frisson suddenly thick in the air.

And while Donnelly's days as a barmaid would seem firmly in her past, her rage at the sexism she encountered while working in a pub still seemed raw on You Owe Me.

There was light among this shade. "Bit creepy, isn't it?" Donnelly remarked during the closing cover of Cyndi Lauper's Time After Time, after singing the "watching through windows" line.

Donnelly's showmanship shone when joined by her four-piece band.

The rapport between these arts college chums was a joy to watch – there was even daggy co-ordinated dance moves to go with Die, the "banger" Donnelly wrote with her first drum machine. 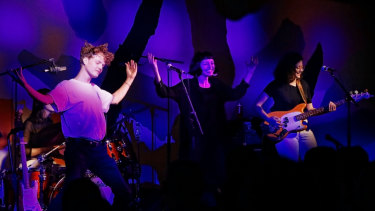 This room's impeccable acoustics meant the varied textures of the new album's songs sounded great, too, particularly the eastern-flavoured guitars on the stand-out call for a #MeToo in the music industry, Old Man.

Yet Donnelly's remarkable voice and gift for melody remained the centrepiece. Break-up lament Bistro, for instance, contained only eight different words – and no politics – but told a story as compelling as any on this night.