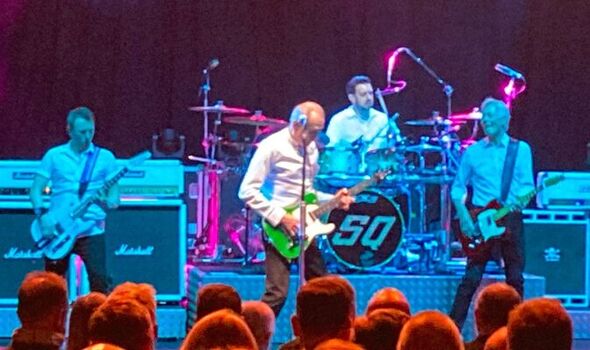 Now a global pandemic can be added to the grand list of hurdles the perennial rockers have managed to overcome in a staggering 60 year career. Band leader Francis Rossi revealed the two years of lockdown were the only times since he first took to the stage in 1962 that he failed to perform live and admits harbouring fears he may “never work again”.

Instead here we are and here we go with his band in the middle of a 14 date UK tour.

Taking to the stage of Manchester’s stunning Bridgewater Hall venue – an amphitheatre more accustomed to housing The Hallé orchestra than the strains of heavy rock band – it seems the Quo had never been away as Rossi, sporting trademark waistcoat and jeans, defies his fast-approaching 73rd birthday to launch into a raucous version of Caroline.

In fitting with the salubrious surroundings the audience may not be as wild as those of yesteryear, but a sea of balding heads nod in appreciation as the on-stage energy never fails to drop as slice upon slice of 12-bar-infused classic rock is expertly delivered.

A surprise selection of tracks from 2019’s critically-acclaimed Backbone album prevents the show slipping into a complete nostalgia-fest, while deeper cuts such as Hold Ya Back, Rain and Softer Ride satisfy the hardcore.

But for many of the audience it’s the home straight barrage of Whatever You Want, Down Down and Rockin’ All Over The World that heralds an explosion of unbridled air-guitar joy. As the final notes of encore song – 1972’s Paper Plane – ring out, the awful silence the pandemic brought to the nation’s stages seems a deep and distant past. How fabulous the status quo has been resumed.