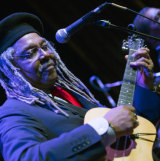 A key player in the Buena Vista Social Club phenomenon that swept the world in the 1990s, Juan de Marcos Gonzalez is still on a musical mission more than two decades later. His ardent desire to share the riches of Cuba’s cultural heritage makes him the perfect musical ambassador, and his new-generation Afro-Cuban All Stars carry the flame for Cuba’s pre-Castro ‘golden age’ while also moving it forward.

Sunday’s concert at The Palms opened with an intriguing composition by Gliceria, inspired by a centuries-old sacred initiation ritual. Sadly, her digital vibraphone sounded like a fuzzy synthesiser, and the use of electric keyboards rather than a piano – coupled with an oppressive, bass-heavy sound mix – made some of the band’s music feel harsh when it should have oozed warmth.

As a result, the concert didn’t really take off until Gonzalez invited two dancers on stage (Eric Turro and his wife Chantal). Suddenly the energy in the room lifted, as the audience responded to Turro’s playful spins, drops and balance tricks.

The band pulled out some hits from the early Afro-Cuban All Stars albums, and within moments the entire audience was on its feet. Gonzalez (on vocals and guiro) and fellow sonero Emilio Suarez roamed the stage, urging us to sing and sway with them, and ensuring that the show ended as the celebratory fiesta we had all hoped it would be.