Live music fans are demanding answers from events promoter Live Nation, amid claims they spent hundreds of dollars on VIP packages only to be moved to the side of the stage while people with less expensive tickets got prime positioning. 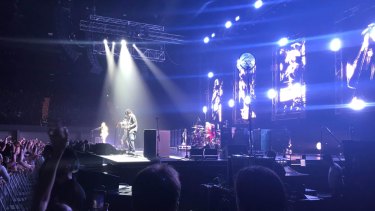 Mel Weeda, from Melbourne's south, recently bought tickets to see the Red Hot Chili Peppers perform live in Hobart. The 45-year-old claims she paid more than $400 for a "VIP GA Experience", which was originally meant to include access to an exclusive centre-stage viewing area.

"We flew to Tassie and made a weekend of it," Ms Weeda said. "It's not something we'd normally do. But a few days before the show, they sent an email saying the VIP area had been changed and they were offering a $50 merch voucher as compensation.

"When you go from being front-and-centre for $450 to essentially two side areas, when $150 tickets are right there next to you… all we bought was a $300 lanyard, when you think about it. It ruined our weekend."

Ms Weeda said she hasn't contacted Live Nation for a refund because the concert promoter's terms and conditions state it reserves the right to change what is offered to customers due to last-minute production or safety requirements.

However, she said she was speaking out because she believed the terms and conditions were unfair and she was aware of other people who had a "pretty ordinary" experience after buying a VIP package.

"It's greed," she said. "If you're paying $450 for a ticket, why not put those people front and centre? If I went to Kmart and [the product] didn't do what was promised, I'd be able to take it back. It's not really fair."

On Saturday, February 16 – a day before the Hobart concert – Ms Weeda received an email from Live Nation with the words: "We are pleased to announce that we have been able to reinstate the VIP GA floor as per the original package inclusions." However, Ms Weeda claims the VIP positioning was in a different location.

It isn't just Australian music fans who are angry. Tony Wadsworth, a business owner and music reviewer from Tauranga, New Zealand, drove two-and-a-half hours to see the Red Hot Chili Peppers in Auckland last month. He claims he was at the show in a personal capacity and had bought a VIP package with a friend as part of a Christmas present.

"The band put on a great show," he said. "It was only the next day that I thought we probably didn't get value for money in terms of what a VIP ticket is. It wasn't really fair that I was paying twice the price of someone who was standing [practically] next to me."

Mr Wadsworth's complaint is similar to those who attended the Red Hot Chili Peppers Hobart show – that VIP general admission ticket holders were originally meant to be centre-stage, but were instead placed to the left and right of the band.

The New Zealand resident said he contacted Live Nation after the concert to air his concerns, but was not satisfied with the company's response that all offers are subject to change, given there was a significant price difference between his tickets and those of people who actually ended up with prime positioning.

"People like Live Nation are very quick to complain about ticket scalping. But the way they're behaving here doesn't make them much better than Viagogo. For most people, they only go to one or two concerts a year. And that does cost a lot of money."

A Live Nation spokeswoman said the concert promoter would like to apologise to VIP ticketholders.

"We take our responsibility to deliver excellent customer service seriously and we work hard to make memorable VIP experiences for fans," she said. "We apologise for the changes made to the VIP experience but, on this occasion, we had to ensure patron safety and comfort was our top priority."