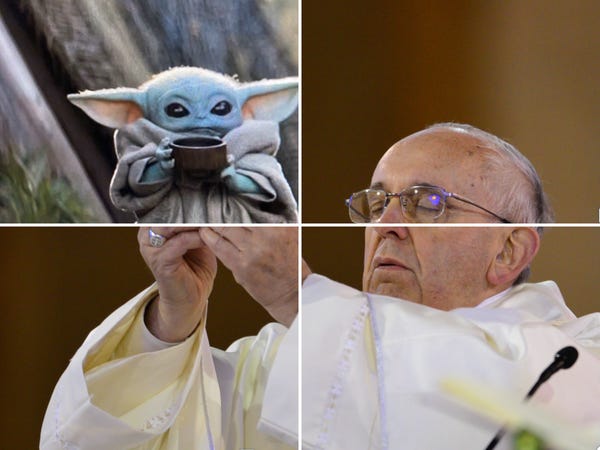 Pope Francis was all over Twitter this weekend. A four-panel meme that shows him holding up various objects ranging from Baby Yoda from "The Mandalorian" to Glossier blush saw an uptick in popularity starting on October 16.

As Mashable's Amanda Yeo reported, the meme isn't actually new — rather, this new wave on Twitter is a resurgence that builds upon former meme formats featuring this particular photo of the Pope.

The original photo was taken in Brazil in 2013 during a celebration of Mass at the Basilica of the National Shrine of Our Lady Aparecida, and is credited to photographer Buda Mendes and Getty Images. In the picture, he's holding a wafer of sacramental bread as part of Holy Communion.

In edits on Twitter, he could just as easily be holding one of the most popular icons of the past year.

Know Your Meme reports that variations of the image circulated on platforms like Tumblr in the mid-2010s, primarily replacing the communion wafer with CDs. There's also the Instagram account @pope_holding_your_fav_album, which edits various album covers into his outstretched hands and appears to have posted in September 2019.

Now, the meme has been adjusted to fit into Twitter's four-panel image format, with Know Your Meme identifying user @SUEHULK as one of the earliest users to post the meme format on Twitter as part of the current wave.

Typically, Pope Francis himself occupies the bottom left panel as well as both right panels, with an object of choice filling in the top-left frame.

Many iterations of the meme began with venerated objects — for some, that meant sworn-by cosmetic products; for others, it meant classic video game console controllers or paper fortune tellers.

Some of the memes also included fictional or abstract objects, with many people invoking recognizable symbols like a Chaos Emerald from the Sonic: The Hedgehog franchise, a Shine Sprite from "Super Mario Sunshine,"and Yu Gi Oh cards.

One particularly viral iteration of the meme that amassed over 500,000 likes made it appear as if Pope Francis was part of a recognizable sequence from "Spider-Man" (2002).

Many iterations of the meme veered into the abstract, with people remixing the format of the meme itself. In doing so, they adapted it to include other popular memes like the iconic "monkey haircut" image, or used it to reference mythical happenings like the birth of Athena from Zeus' skull.

Of course, not everyone was thrilled about the Pope meme — Martin Luther, the German theologist who's best known for rallying against the Roman Catholic Church's system of indulgences and kick-starting the Reformation, certainly wouldn't be.