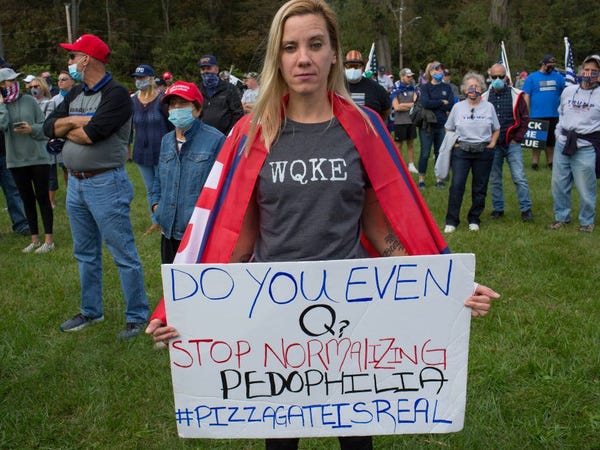 Pinterest is the latest social media platform to take action against the QAnon conspiracy theory, telling Insider that the company does not allow QAnon content on their site.

QAnon, which has been referenced by the FBI as a potential domestic terrorism threat and has been linked to several crimes, is a baseless far-right conspiracy theory alleging that President Donald Trump is fighting against a deep-state cabal of human traffickers.

Pinterest, a photo-saving and sharing website that allows users to create image-based inspiration boards, told Insider in an email Tuesday evening that the platform actively seeks out QAnon content to remove from the platform.

"We believe in a more inspired internet, and that means being deliberate about creating a safe and positive space for Pinners. Pinterest is not a place for QAnon conspiracy theories or other harmful and misleading content," the spokesperson said. "We proactively look for and remove content related to QAnon, in addition to taking action on content reported to us."

Pinterest also disabled search results for the term "QAnon" and "WWG1WGA," which stands for the movement's slogan, "Where we go one, we go all."

The spokesperson said that decision is part of the platform's "commitment to combating misinformation" ahead of the November election. Pinterest previously announced that it would not allow political advertisements of any kind on the platform.

It was not immediately clear when the policy on QAnon was enacted, but in July, one Twitter user pointed out that the platform had disabled the "QAnon" and "WWG1WGA" search results. This is Pinterest's first public statement on QAnon.

The platform has been popular with the QAnon community in the past. In August 2018, The Daily Beast's Kelly Weill reported that QAnon believers had found a home on Pinterest, where some users were sharing QAnon-related "pins."

In that story, Weill marveled at the presence of the conspiracy theory in a space dominated by recipes and DIY activities — offering a glimpse of what would come. The conspiracy theory has recently found ballooning support among women, as it's been spread in lifestyle and parenting influencer communities in what researcher Marc-André Argentino calls "Pastel QAnon."

Pinterest's statement comes one week after Facebook's announcement that it would attempt to remove all pages, groups, and Instagram accounts "representing" QAnon, which precipitated a swath of platforms following suit, including Etsy, Peloton, and Triller.