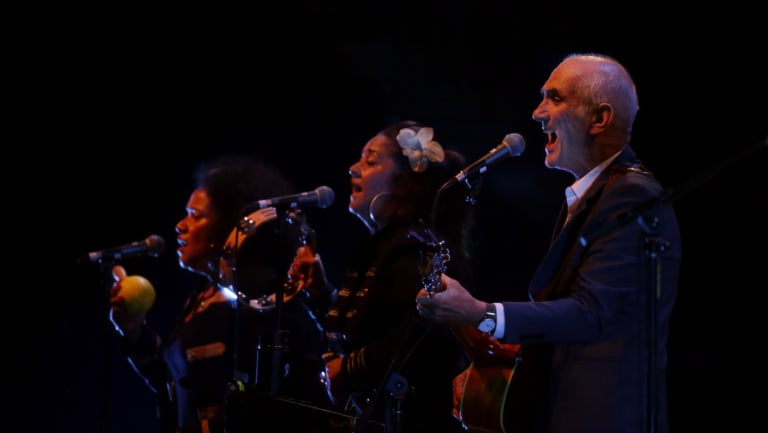 Paul Kelly wrote How to Make Gravy for a Salvos Christmas compilation charity CD in the 1990s. But what could have been a throwaway novelty song has, over the decades, earned a special place in Australians’ hearts.

I’ll never forget hearing it in the middle of a dark and freezing Scottish December. As Kelly recounted a story of complicated families, nostalgia, love and loss, the tears welled up in my eyes; I was overcome by a homesickness for the hot Australian summer and Christmas lunch under the gum trees.

Whoever came up with the idea for a Christmas show around this quintessential Australian song is a genius. This second instalment brought a slew of younger support acts including Mojo Juju, Alex Lahey, and Angus and Julia Stone, and the mass appeal of the sold-out line-up was evident from the broad cross-section of punters, from premix guzzling 20-somethings to families with kids and  Baby Boomers.

But there was one unwanted guest: the weather. Friday’s torrential rain flooded the back-of-house, forcing the venue's closure after Mojo Juju’s opening slot. Punters waited patiently in waterproof ponchos for two hours before the gates reopened and Lahey took the stage with an energetic, if shortened, set. Neither performance nor audience seemed too miffed by the delays.

Kelly opened, an hour later than scheduled, with Hasn’t It Rained from his Merri Soul Sessions, before launching into the first song off his new album, Nature.

There were plenty of surprise guests throughout the evening, including Kelly’s two daughters Maddie and Memphis joining on vocals like miniature, more subtle versions of backing singers Vika and Linda Bull; Alice Keith, for an overly restrained banjo and vocals appearance on one of Kelly's Shakespeare sonnets; and, threatening to completely steal the show, Kate Miller-Heidke with her spectacularly haunting vocals on Bound to Follow (Aisling Song). One almost expected him to wheel out Kasey Chambers too.

Sweet Guy is a cracker of a song about a horrifying topic – domestic abuse – and when Vika sings it she takes it to a whole new level. Kelly includes the version regularly in his shows now; it has not gone unnoticed, either, that all of his special guests were women, and his three support acts featured the next generation of great women performers.

How To Make Gravy came towards the end with a bittersweet note – Ash Naylor admirably played the slide guitar line written by Spencer P. Jones, who sadly passed away this year.

Fans were clearly satisfied with their hearty meal of songs old and new, big and small. The gravy on top was a closing cover of Darlene Love’s Christmas (Baby Please Come Home), sung by Linda, with the whole ensemble, special guests and all, joining in on stage.