A new opera about the life of Brett Whiteley from Elena Kats-Chernin, a much-praised William Kentridge production of Alban Berg's Wozzeck and a fresh Madama Butterfly directed by Graeme Murphy are among the highlights of next year's Opera Australia program in Sydney.

And opera lovers can also expect to see much more of the cutting-edge "virtual" sets that were first unveiled in Davide Livermore's well-received production of Aida that premiered last month. Next year there will be three digital operas. 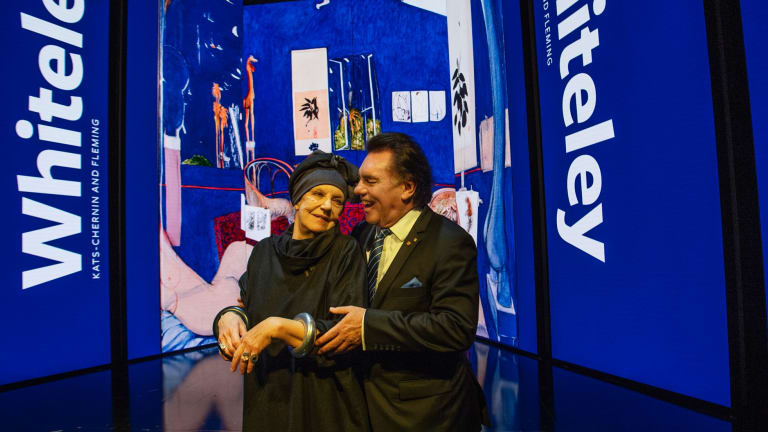 Lyndon Terracini with Wendy Whiteley, former wife of Brett Whiteley on the stage of the Joan Sutherland Theatre.

Opera Australia artistic director Lyndon Terracini made clear where he believes the future lies, unveiling next year's slate on stage at the Joan Sutherland Theatre with a series of ever-changing images on vast LED screens as a backdrop.

Wozzeck is a co-production with the Salzburg Festival, the New York Metropolitan Opera and the Canadian Opera Company.

"Although I can't recall any truly bad performance of Wozzeck, I don't think I have ever experienced one as completely enthralling as this one," he added.

Terracini was equally enthusiastic, particularly about the involvement of Kentridge.

"William is not only an extraordinary visual artist he also has a different view of how you direct an opera," he said. "There's a lot of digital technology in it and it's a very different digital aesthetic from what we are using."

With the final retiring last year of Moffatt Oxenbould's Madama Butterfly audiences next year will get a new production from Graeme Murphy of Puccini's crowd-pleaser that will also utilise the LED digital staging system.

However, Terracini promises the effect will be very different from what audiences have seen in Aida.

It will feature Korean-born soprano Karah Son in the lead role – "one of the best Cio Cio Sans in the world", according to Terracini.

Whiteley, currently in preparation and commissioned from Elena Kats-Chernin with a libretto by Justin Fleming, promises to be a uniquely Sydney-centric account of the legendary painter's life.

"Elena has learned the craft of music and drama," says Terracini. "She knows how to create a narrative using music as a driver, and that's an incredibly important thing.

"The other really important thing is people want to listen to her music.

"There are a number of composers who write 'operas' and quite frankly, the audiences loathe the music and they simply don't want to hear it. We have to be creating operas that people want to see."

As announced earlier, this year's production on Sydney Harbour will be a new production of West Side Story. And for those who can't get enough of Leonard Bernstein's music in the 101st anniversary of the year of his birth, unusually, OA will stage a second, different West Side Story in Melbourne next year.

Overall, Terracini says the company is in robust financial health, which allows him to program more adventurous works alongside reliable box-office draws such as La Boheme and Turandot.

"We're the only opera company in the world where more than 50 per cent of our total turnover comes from the box office," he said.

"Unless 50 per cent of your income comes from the box office, then you're just not connecting to enough people.

"I think every arts organisation, or frankly any organisation that receives money from government, needs to be extremely responsible in the sort of work that you're delivering."

Asked to choose his own personal favourite from next year's eclectic list, Terracini was uncharacteristically coy. He insisted it is the current production that is always closest to his heart.

"Whatever show we will be doing that day – that would be my favourite," he says.