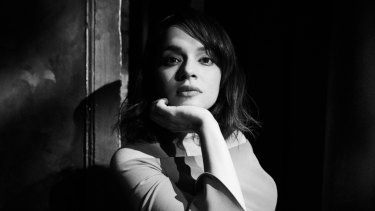 Does boldness pay? As softly as she plays – despite a band which stretched to pedal steel/guitar, drums, and bass, organ and piano, there’d be no concern about noise complaints from the neighbouring hotels in Market Street – on stage as much as on her albums, Norah Jones does not take the soft options.

And her audience, always assumed by those who long ago dismissed her as pretty muzak to be the comfortable pants-wearing/tea-sipping types, seems more than happy to go with her.

Not just because her singing is sublime (which it is: her tone is a caress and her delivery makes effortless seem like a word that’s trying too hard) and certainly not because her stage chat is crackling (which it isn’t: she remains supremely uncomfortable making even the most basic small talk in front of an audience, and thankfully mostly avoids it), but maybe, just maybe, because they like the trip they’re on.

The 85-minute set was front-loaded with songs from her new mini-album, a collection which pushes forward unexpected small turns and surprising emphases, beginning this tour with the creeping nightfall of My Heart Is Full. And it’s not exactly a set packed with hits, with Don’t Know Why almost given away as the one-song (and only one song) encore.

The band can sound all down-home greasy, like Little Feat playing Hank Williams; a cocktail bar ensemble on the easy; or, in Nightingale, mix a southern soul organ, jazz drums, country piano, ‘70s bass, and West Coast guitar. Then in Humble Me, it’s all stripped back to piano and pedal steel to let the space envelope the song, or at another point in the set, fill out to a kind of punchy Americana, ala The Band.

No, none of this is exactly wild experimentation or obscure art rock: this is country-and-jazz influenced pop and it can easily be taken in by sitting back in these comfortable seats and letting it all pass over your closed eyes and contented face.

However, nothing really came packaged as if lifted from the disc, each musician was given room to breathe in their playing and interaction, and, if you chose to pay attention to it, the odd turns and experiments put the onus on difference, not blandness. Which is bold enough nowadays to be noted. And it seems, rewarded.