In the 19th century imagination Scotland was gloomy and gothic – a far cry from the sensible people who voted against Brexit in 2016. 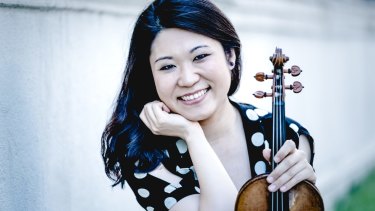 Conductor Asher Fisch, violinist Tianwa Yang and the SSO presented a varied selection of 19th century Scottish musical postcards from the darkness of Strauss' Macbeth, Opus 23 to the bagpipes and folksongs of Max Bruch's Scottish Fantasy, concluding with Mendelssohn's storm-tossed Scottish Symphony No. 3 in A minor, Opus 56.

In Strauss' tone poem Fisch displayed a fine sense of drama and incisiveness of gesture, bringing structural clarity and definition to the work's Romantic extravagance.

Surprisingly, Yang's performance of Bruch's Scottish Fantasy for violin and orchestra, Opus 46 was the first time the SSO had played the work and she brought to it a beautifully finished and projected sound and virtuosic dexterity.

Despite its moments of pictorial depiction – the chromatic howling of the Coda of the first movement for example like wind-blown waves – the Scottish Symphony reveals Mendelssohn's classical side in its formal architecture and affirmative closure. Fisch and the SSO performed it with polished balance and a judicious sense of emphasis and dynamism.

Eighteen members of the vocal ensemble known as The Sixteen (go figure?) presented a characteristic program under conductor Eamonn Dougan juxtaposing the richly intricate, serenely balanced vocal tapestries of the Tudor period with the highpoints of British vocal writing from the 20th and 21st centuries.

Framed by the simple chaste hymns of Thomas Tallis' Tunes for Archbishop Parker's Psalter, the program included 16th century madrigals by Morley, Gibbons and Byrd and polyphonic sacred music by Tallis, Byrd and John Sheppard interspersed with two of Scottish composer James MacMillan's austere Strathclyde Motets (themselves at times reminiscent of the open harmonies of the 15th century), Britten's stylish Tudor evocations Gloriana Dances (written for the coronation of the other Elizabeth) and exquisitely shaded readings of Michael Tippett's Five Spirituals from his oratorio A Child of Our Time.

Few mid-sized vocal ensembles can match them in balance, transparent clarity (a particular joy in their encore Byrd's Ave Verum Corpus), subtlety and variety of dynamic and vocal timbre (as, for example, in the rich expressiveness and salted astringency of Tippett's harmonies) and simple beauty of sound.

In a word, superb.