While taking stage at Summer Sonic Festival in Japan, the ‘WAP’ hitmaker wears an outfit which is inspired by one of the most iconic anime characters, though she puts a racy twist on it.

AceShowbiz –Meghan Thee Stallion paid tribute to one of the most iconic anime characters during his performance at Summer Sonic Festival in Japan. During her set on Sunday, August 21, which marked her first show in the Asian country to date, the Houston star rocked a Sailor Moon outfit though she put a racy twist on it.

For her performance, the “Savage” hitmaker donned a blue and white schoolgirl outfit. She paired the look with a bright red bow on her chest and a pair of white boots in the style of the show’s titular character.

Her bottom, however, wasn’t actually a full skirt. While it looked like one from the front, it was actually a backless skirt. Megan flaunted her bare bottom in a white bodysuit when she turned to show off her twerking skills to the audience.

Later that day, Megan took to her Twitter account to share some snaps from the fun-filled show. “This whole stadium in JAPAN was going UP for me, you can’t fake thee love im grateful,” so she wrote in the caption. 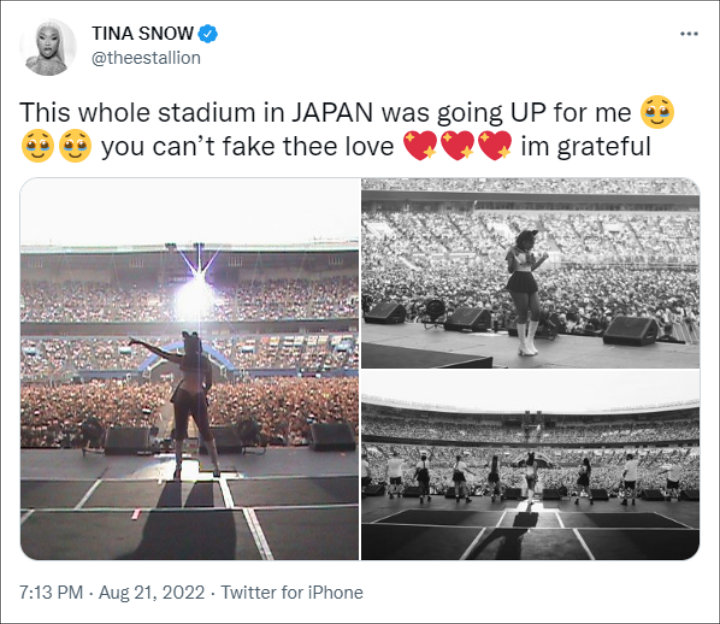 She also treated her fans to more pictures of her in the Sailor Moon outfit in an Instagram post. “Tokyo today,” she captioned the pictures.

Fans were loving Megan’s choice of wardrobe. Praising the “WAP” hitmaker, one person wrote in an Instagram comment, “This is sooo cute! The half skirt sent me tho.” Another fan found it a little bit unsurprising “cause we all know she love’s anime.”

“Honestly I think Sailor Moon would be proud!!!!” someone else added. “This cute , everybody love a little anime,” another comment read. Meanwhile, one user cheekily joked, “Lmaooo sailor showed that moon.”