Since being crowned the winners of “The X Factor” in the U.K. in 2011, Little Mix’s impact has been anything but little. Over the years, the group has earned many accolades, and while original member Jesy Nelson may have decided to leave the group in December 2020, the remaining three singers — Perrie Edwards, Jade Thirlwall, and Leigh-Anne Pinnock — have continued to stay on top form as a trio.

As of this writing, Little Mix has achieved five No. 1 singles and six top-five albums in their home country, according to Official Charts. In 2017, the “Think About Us” chart-toppers won their first BRIT Award for “Shout Out To My Ex” in the category for British Single. Two years later, their collab with rap star Nicki Minaj, “Woman Like Me,” took home British Artist Video of the Year. This year, the trio won their third BRIT award and became the first all-female group to win Best British Group, as reported by NME.

To celebrate Little Mix’s nonstop success and impact on pop culture, the talented entertainers are going to be honored with something very exciting. Keep reading to find out more.

Little Mix is getting the wax treatment by Madame Tussauds 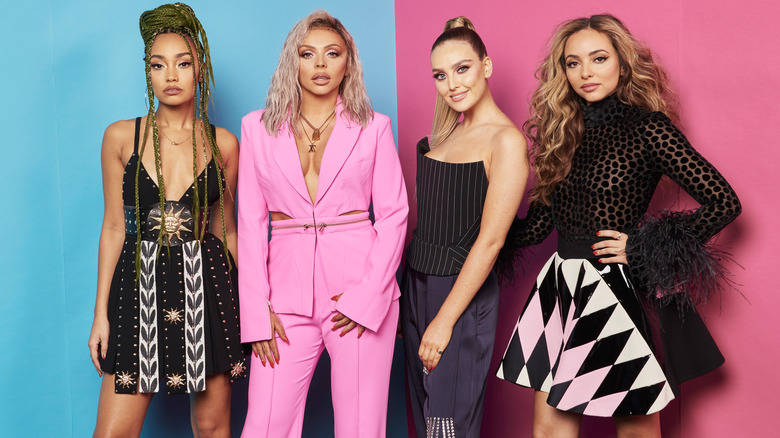 After much demand from fans, Madame Tussauds in London has announced that Little Mix will be getting … waxed! The popular tourist attraction revealed they have been working on their figures since early 2020 and explained that all of the members have been involved in each step.

Madame Tussauds mentioned that the four figures will see one of their most popular music videos immortalized. Even though Jesy Nelson left in December 2020, she too will receive a waxwork with the other three original members — Jade Thirlwall, Perrie Edwards, and Leigh-Anne Pinnock. “It’s finally happened, Little Mix is at Madame Tussauds London. We’re absolutely buzzing and it’s the best 10 year anniversary present that we could share with our fans,” Thirlwall shared, per Madame Tussauds.

“The Madame Tussauds London artists are ridiculously talented. Their work is so intricate. They took pictures and notes of every little detail of us — even down to the shape of my nails!” Edwards said in her statement. Pinnock also expressed her excitement, explaining, “We can’t wait for our fans to see the figures! We hope they love them as much as we do!”

Madame Tussauds have remained fairly tight-lipped about their announcement but have informed fans that Little Mix’s waxwork will debut this summer. Iconic!