When he was 13, back in 1969, Jerry Douglas met his hero, Josh Graves, then the most acclaimed player of the Dobro​ resonator guitar in bluegrass music. Douglas, who now wears that mantle himself, not just in bluegrass, but across all idioms, was at a summer camp, and Graves who was visiting friends nearby, was told about this wonder-kid, and taken to meet him.

"He just handed me his guitar, which was a shock," recalls Douglas, speaking on the telephone from his home on the outskirts of Nashville. "It was like holding Excalibur. It was the guitar that I'd heard on all these records that I'd just loved, and wondered if I could ever have an instrument like it, and here I am, 13 years old, holding this thing. It was like holding the Holy Grail." 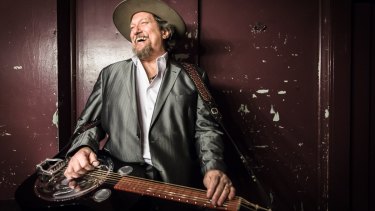 Jerry Douglas is one of the most recorded players in history.Credit:Greg Vorobiov

Douglas played the precious instrument, and when he handed it back, Graves said, "I'm going to see you again, kid." Sure enough, in future years they came to play on each other's records. "I wouldn't be here if it wasn't for him," Douglas says.

Douglas has become one of the most recorded musicians in history, at one point doing three sessions a day, five days a week for 15 years. He's worked across a wide musical divide, including with singers as diverse as Elvis Costello, Ray Charles, Dolly Parton, Alison Krauss​ and Paul Simon, while his instrumental collaborators have included guitarist Eric Clapton and banjo virtuoso Bela​ Fleck.

The Dobro​ is so called because it was invented by the Dopyera​ brothers, Slovakians who settled in California and, having already invented a steel resonator for the National brand, in 1928 cooked up a wooden one generating comparable volume. Its popularity swiftly spread from Hawaiian music to blues and country, being ideally suited to the countless bars and other venues without proper sound systems.

Douglas, who was a singer as a child, stopped because he found the Dobro​ so much like a human voice, and now finds it supremely suited to accompanying singers. "I can sing a harmony with the guitar," he says, "just right behind them and getting underneath them – not to distract from what they're doing, but to enhance it and accent it."

Humble by nature, he recoils at being hailed as a torchbearer for bluegrass. "I've done as much to tear bluegrass apart as I have to carry it forward," he says, "just by having different influences come into my life, and the way that I play."

But then he acknowledges the importance of the Earls of Leicester, his band that replicates the authentic bluegrass popularised by the Foggy Mountain Boys.

"Before that I was out on the fringes all the time, and trying to create a new music from bluegrass. And I'm still doing that, and I really enjoy that, but I also enjoy playing the real thing.

"There's something about it that makes me feel like a kid again. Those were the first sounds that I heard, and those were what inspired me to become a musician in the first place."

On his first visit to Australia, Douglas comes with local guitar hero Tommy Emmanuel, who he met when they happened to sit together at a gig by comedian Craig Ferguson. Some years later they created a two-guitar show where each plays solo, and then they duet. "It's just electric," Douglas says. "It was just meant to be. And there is no better way to play in Australia the first time than to come there with Tommy Emmanuel!"