Willie Nelson is still on the road touring at age 88. He is currently part of the lineup for the 2021 Outlaw Music Festival Tour, which will begin in Texas in August and consist of 14 dates (via Rolling Stone). Other artists featured alongside Willie Nelson and the Family Band are Nathaniel Rateliff & the Night Sweats, Margo Price, Sturgill Simpson, and the Avett Brothers. Nelson recently made a statement about the upcoming tour: “The Outlaw Music Festival Tour has always been about family and friends coming together for a great day of music and fun, and with the amazing group of artists joining us, this year promises to be our most special Outlaw Tour to date,” he said.

There have been rumors floating around that this tour will be the “Always On My Mind” singer’s last (via Gossip Cop). However, during an interview with Parade earlier this year, Nelson was adamant that he would not stop performing. “Music is what I do, and retiring is something that I don’t even want to think about,” he told the outlet. There may be a reason that fans have been wondering when Nelson will hang up his hat for good. The “Blue Eyes Crying In The Rain” artist has battled health issues over the past few years that have even led him to cancel some of his concerts. Keep reading to learn more about his health struggles and how he’s doing today.

Willie Nelson isn't letting his health get him down 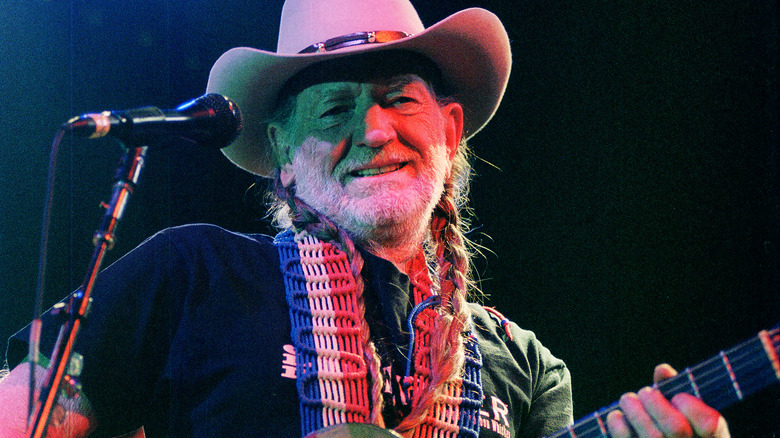 Iconic country singer Willie Nelson has struggled with breathing problems over the past few years. In 2017, he had to bow out early from a show in Salt Lake City due to the severity of the issue, according to the BBC. At the time, he explained, “The altitude got to me. I am feeling better now and headed for lower ground.” However, the following year, he had to cancel a handful of shows after coming down with the flu, and later, Nelson was forced to pull out of the Outlaw Music Festival due to illness. In 2019, after a similar occurrence, Nelson took to Twitter to apologize for letting his fans down again. “I’m sorry to cancel my tour, but I have a breathing problem that I need to have my doctor check out,” he wrote, adding, “I’ll be back.”

Country Thang Daily reported that the source of the “On The Road Again” singer’s breathing problems is emphysema. The issue became so bad that Nelson was forced to give up smoking pot (per Taste of Country). This admission came as a shock to fans who are more than familiar with Nelson’s unwavering support for legalizing marijuana. However, he told San Antonio news station KSAT that the decision was for the sake of his health. “I have abused my lungs quite a bit in the past … so I have to be careful,” he admitted. “I’m lucky to be here,” he added, while flashing his signature smile.