Ever since touring promoters Live Nation and AEG made the unprecedented decision to cancel tens of thousands of shows starting in mid-March due to the coronavirus pandemic, the United States has not held one major concert with a live audience. As stay-at-home orders close in on their eighth week for numerous states, many Americans continue to favor restrictions that sacrifice widespread gatherings for public health in an effort to curb the total number of coronavirus cases. The live music industry has been decimated, with Pollstar estimating that the industry could lose up to $9 billion should concerts not be held for the balance of the year.

But as restlessness and an increasingly crippled economy grow, some in the industry are taking active steps to stage concerts in defiance of state officials’ recommendations. On May 15th, concert promoter Mike Brown and Mississippi Southern rock singer Travis McCready and his three-piece band will play an acoustic set at Brown’s TempleLive in what will likely be the first concert held since most public gatherings were shut down.

One week is an eternity these days and a number of factors could prevent McCready from performing at the 1,100-capacity theater in Fort Smith, Arkansas. But tickets are on sale — the maximum attendance has been cut to 229 people — and Brown is optimistic that the show, in an altered form to a normal concert and under extremely tight safety protocol, will go on.

Stranded Under the Northern Lights: A Musician's Surreal Coronavirus Quarantine

“By no means is anyone involved in this wanting to promote anything done negligently. But people are needing something, and when people need something, they get it in dangerous ways,” says McCready, a raspy-voiced vocalist with a laid-back demeanor reminiscent of Sean Penn’s Jeff Spicoli from Fast Times at Ridgemont High. “I’d rather promote something where it can happen in the safest way possible for now, and it’s not just some bar opening up saying, ‘Everybody come and let’s party. One-dollar Coronas all night.’”

According to TempleLive’s posted “COVID Operating Protocol,” the venue’s safety precautions include sanitizing the theater with disinfectant fog just before doors open, taking fans’ temperatures at the entrance, and restricting the direction of pedestrian traffic. Seats are being sold on Ticketmaster in “fan pods” of two, four, six, eight, 10, and 12 to keep groups of concertgoers six feet apart from other groups and limit their interaction to those with whom they’ve been quarantined. Masks will be available for purchase, though McCready, whose former band Bishop Gunn opened for the Rolling Stones last year, and his band won’t be wearing them. 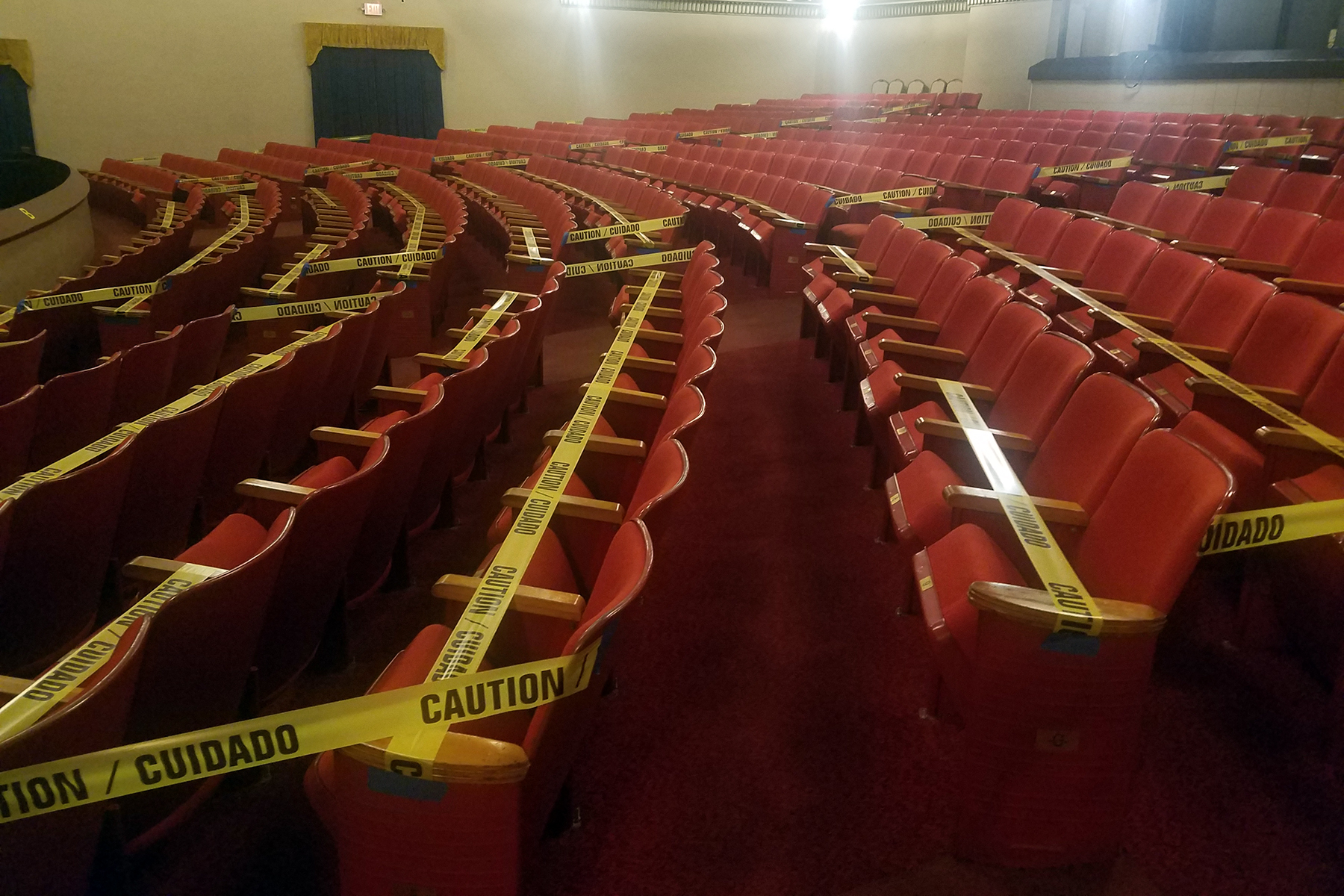 But Brown insists that he and his TempleLive team are closely following the Arkansas Department of Health’s guidelines to safely reopen the state. “We asked how can we maximize yield out of our occupancy and still maintain fan safety and experience,” says Brown, who operates additional TempleLive venues in Cleveland and Wichita, Kansas. “We went in and measured off every direction we can possibly see and mapped it out so everybody is six feet from each other. All the traffic in and out of the venue is one way; you come into your section in one direction and exit out the other direction. There are 20 hand-sanitizing stations placed strategically in the building, not just at entrances and exits like the governor’s request. We shuttered down the bathrooms to only 10 people allowed at a time. We’ve closed off urinals and sinks to maintain social distancing. And we’re going to sanitize, which we’ve already done, but we’ll do it again before and after each show as we go forward.”

Brown announced the show in April in anticipation of the state’s expected May 4th easing of distancing restrictions. But when Governor Asa Hutchinson revealed Arkansas’ reopening plan, concerts weren’t allowed to resume until three days after the McCready event. According to the governor’s guidelines, “Indoor venues such as theaters, arenas, stadiums, and auction houses that are designed for large groups may reopen on May 18th on a limited basis … for audiences of fewer than 50 and that requires strict social distance among performers, contestants, and members of the audience.”

Places of worship, addressed under separate guidelines from the “indoor venues” recommendations, were allowed to open on May 4th with no capacity restrictions, but congregants must adhere to six-feet social distancing. Brown believes concerts should have similar guidelines to church services. “The virus doesn’t know if it’s in a church or a high school gymnasium or a music venue. I think there needs to be some clarity there,” he says. 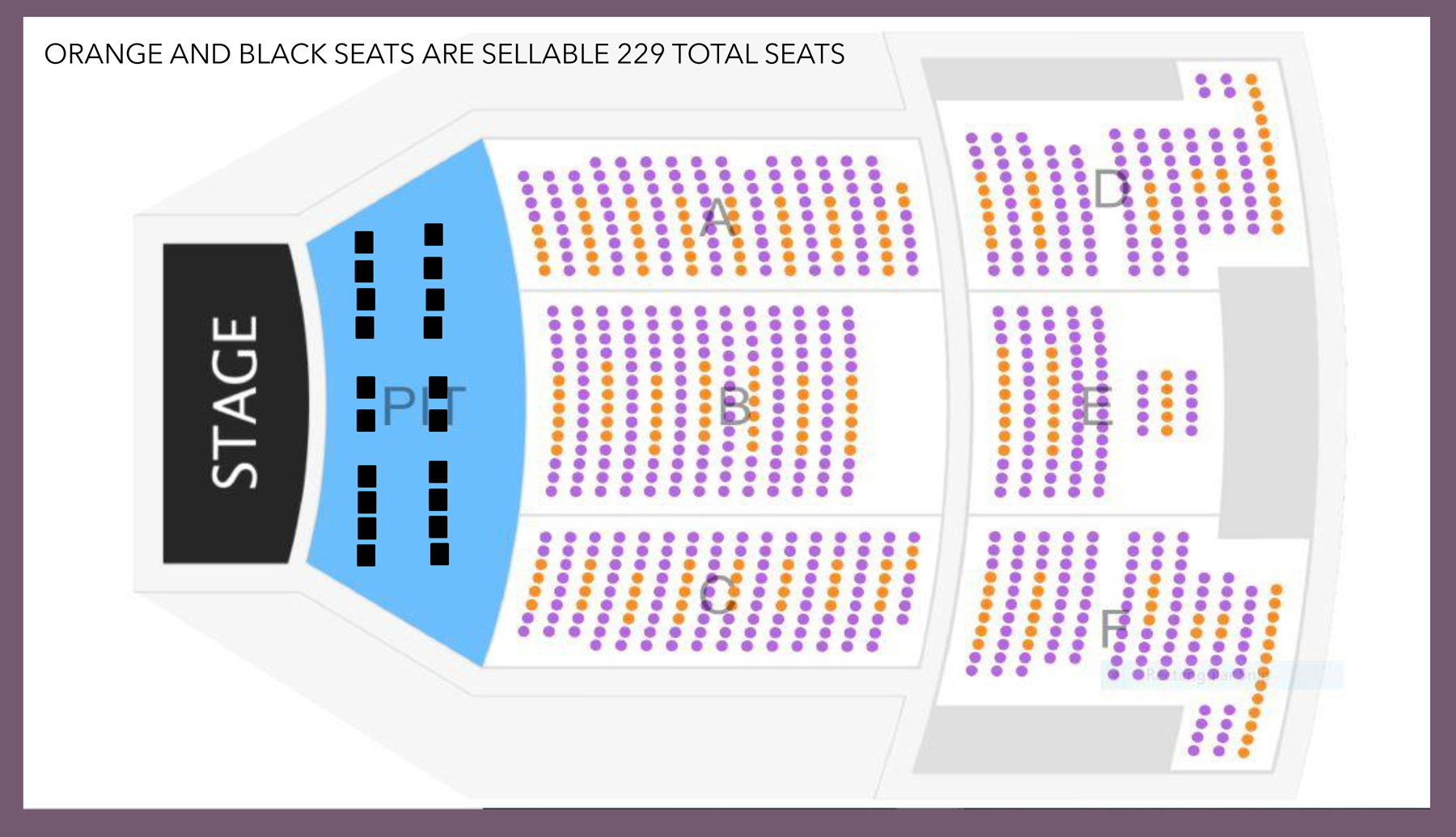 A seat map of the venue showing where blocks of seats were sold.

Despite TempleLive’s safety protocols, both Gov. Hutchinson and Fort Smith mayor George B. McGill have voiced objections with Brown’s plan. “As advertised, this concert does not comply with our Department of Health directives for indoor entertainment venues,” Hutchinson tells Rolling Stone in a statement. “I appreciate the venue owners working to enforce social distancing and the wearing of masks to protect the concertgoers, but the concert remains outside of the state’s pandemic directive.”

More than half the states in the country have either partially reopened or have planned on reopening select sectors. Arkansas has not issued a stay-at-home order that would have prevented any concerts or other large events from happening. Gyms and salons have already begun to reopen in the state under strict conditions, while restaurants are set to open next Monday and the state’s three casinos can open in a limited capacity on May 18th. The state has seen nearly 3,700 cases resulting in more than 80 deaths, according to the Arkansas Department of Health.

“To hear some people talk, it seems like they think you have to choose between saving lives or saving the economy,” Arkansas Department of Health Secretary Dr. Nate Smith told local outlet THV11. “I want to say that really is a false choice because, here in Arkansas, we’re doing both.” At a press conference on Thursday, Hutchinson said he was optimistic the state could get to the next phase of its reopening within 14 days.

“I never issued a shelter-at-home order, but we implemented a targeted approach to reducing the spread of COVID-19,” Hutchinson tells Rolling Stone. “This approach proved successful. Now we are gradually lifting some of the restrictions in place, but it is being done in phases to make sure we reduce the opportunity for a resurgence of the virus. We need everyone’s patience and support to make this strategy successful.”

When asked if the governor had the legal authority to shut down the concert, a spokesperson for Hutchinson replied, “The Department of Health directive does have authority to legally restrict gatherings that are not in compliance, but the Governor remains confident that the issue will be resolved before such action becomes necessary.”

Fort Smith mayor George B. McGill says the city defers to the governor and Secretary of Health Smith. “The Arkansas Department of Health is responsible for enforcement and they were made aware of the situation [earlier this week] during the press conference,” McGill and City Administrator Carl Geffken said in a joint statement to Rolling Stone. “Dr. Smith stated that the Arkansas Health Department will be investigating this event.”

Brown confirms that he and the legal team for TempleLive, which is owned by parent company Beaty Capital Group, are in discussions with state officials. “We are in communication with the Arkansas Department of Health to try and resolve this to where it works out best for the administration and for the venue and the fans and the band. I think that we can get to an agreement,” he says. “We’re a real estate company that probably has a million square feet of various types of real estate, so we’re not a small venue that is trying to do something that hasn’t thought this through for safety issues.” 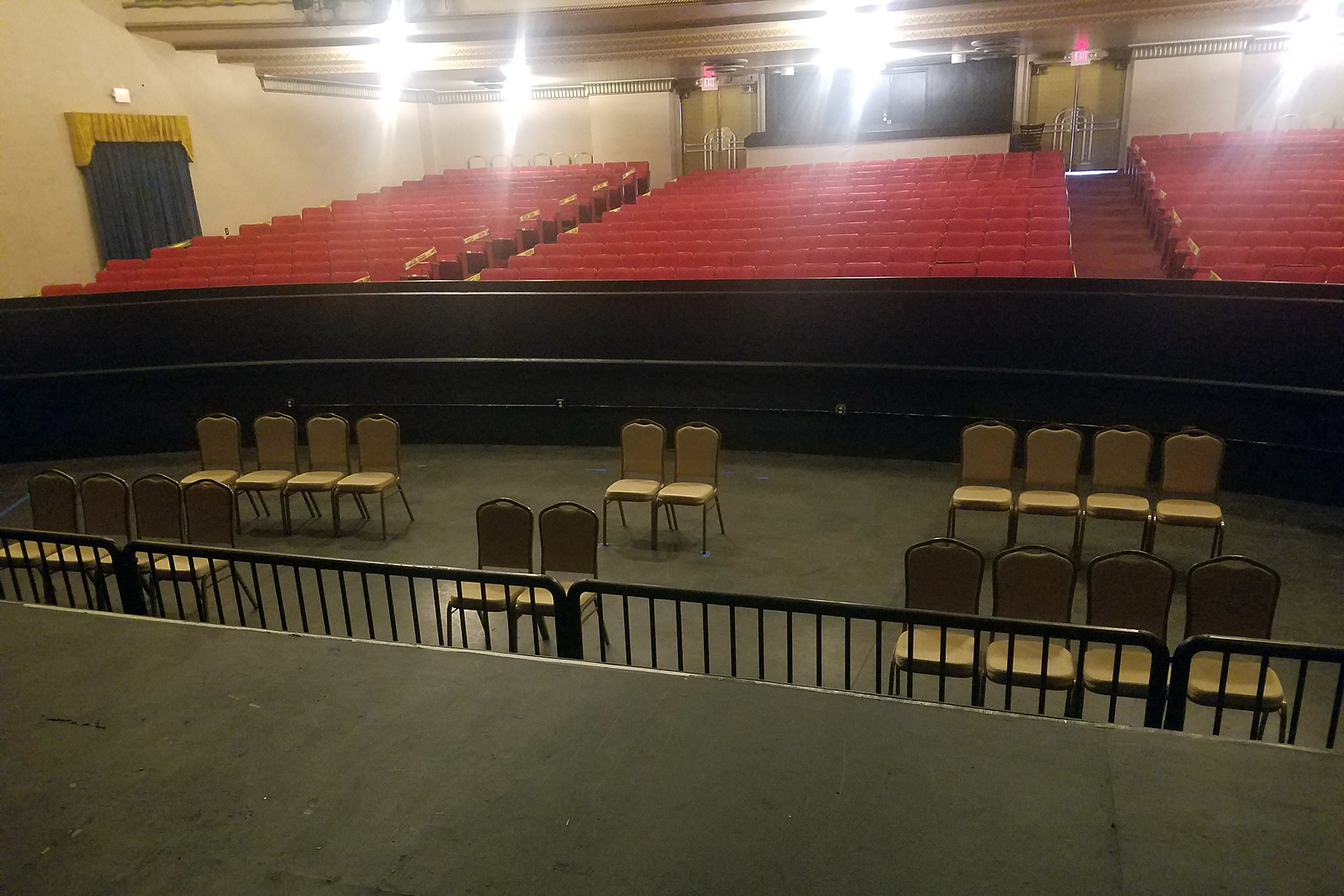 The spaced out “pit seats” closest to the stage.

The show will occur as numerous states have planned for concerts, sporting events and other large gatherings to be one of the final steps in their reopening plans. On April 28th, California unveiled a four-stage plan to safely reopen the state. Schools, select retail stores and some manufacturing were a part of phase one, while concerts were included in the final stage. “Large gatherings such as concerts and sporting events may not be approved in the city for at least one year,” Los Angeles Mayor Eric Garcetti said in an internal email last month obtained by the Los Angeles Times.

The show will occur during an unprecedented time for the live music industry. On Thursday, Live Nation reported a 21 percent decline in revenue for the first quarter, with total concert revenue down 25 percent year-over-year. On their investor earnings call, President and CEO Michael Rapino said the company would test crowdless broadcasted shows alongside drive-in concerts and reduced capacity festival shows over the summer.

“Whether it’s in Arkansas or a state that is safe, secure and politically is fine to proceed in, we’re going to dabble in fanless concerts with broadcasts, we’re going to go and do reduced capacity shows because we can make the math work,” Rapino said. “There are a lot of great artists that can sell out an arena, but they’ll do 10 higher end smaller theaters or clubs. We’re seeing lots of artists chomping to get back out once it’s safe.”

McCready says he is placing his trust in Brown and his safety plan, saying that a seated theater is the ideal venue for a social-distancing show. (TempleLive has previously announced shows on their calendar with Ronnie Milsap in August and the Cadillac Three in September.) “How would you do it in other types of venues? Put an X on the floor or whatever?” McCready says. “The safety precautions go to [Mike] and he handled that well, I believe. Which was what I was really thinking about before getting into anything like this. He seems to have crossed all his T’s, dotted his I’s, and I’m going to do my music part the best that I can.”

Brown says that after an initial learning curve with fans figuring out how to buy the “pods,” the show is tracking to sell out at its 229-person capacity. Asked if it’s too early to attend a concert, Brown brings up the individual’s right to attend events. “I look at it like any other choice you’re allowed to make in this country: When movie theaters open, if you don’t feel comfortable going to a movie theater, don’t go,” he says. “But don’t tell other people that they can’t do what they want to do.”

So is he convinced the concert will actually happen? “I’ll say yeah,” Brown says confidently.

“Honestly, no. I’m just riding this,” he says. “We got [a week] to look at how everything is rolling. I suppose I’ll walk in through the back door, sit down, and play some songs.”