Back in March last year, Elvis Presley’s home of Graceland had shut its doors for two months as the USA went into lockdown. Despite the difficulties, the Memphis mansion’s Vice President of Archives and Exhibits Angie Marchese started sharing some Instagram videos with fans that delved into some of The King’s priceless possessions. While at one point she even live-streamed a mini-tour of Graceland’s front rooms with a Q&A.

Of course, Elvis’ home did reopen with COVID-19 restrictions and a limited capacity in place. But as the pandemic continues on, for the first time ever Graceland are offering two-hour virtual tours for $100 per live stream.

With Memphis, Tennessee being in the middle of the USA, this has proved a particularly exciting opportunity for international fans to see The King’s palace for themselves. There are only three of these available with the first having taken place on January 27, while just two more follow on February 25 and March 25 starting at 8am CST (2pm GMT).

Express.co.uk had the privilege of attending the first-ever Graceland virtual live tour with the incredibly knowledgable and affable Angie herself as our personal guide. Once our ticket was purchased we were given access to a private Facebook group with fellow Elvis fans a few days before the tour kicked off.

There, we were asked to submit any questions we might have before the virtual experience began, which was streamed via Facebook Live within the group. We’d recommend then casting your phone or laptop to a TV or big computer monitor for the best viewing possible. With a warm welcome, Angie became her fascinating and expert tour on the steps of Graceland itself, asking ticket-holders to put questions in the comments as we went along. 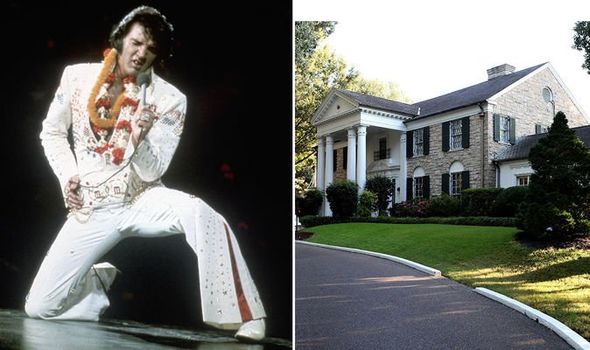 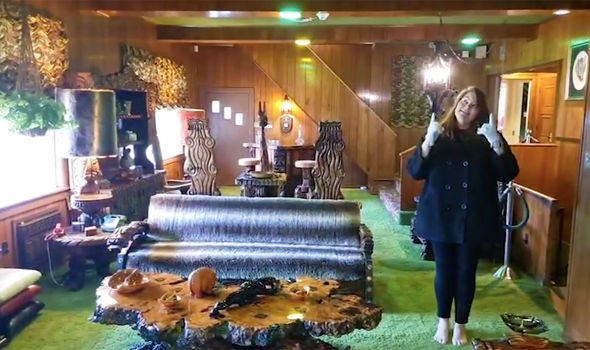 The virtual tour took us through Graceland’s front door where we saw the Music Room, Dining Room, Gladys’ bedroom, the kitchen and, of course, the Jungle Room. There was a brief technical glitch 10 minutes in where the video had to be restarted, but this was swiftly rectified and our guide continued from where she left off. This momentary frustration was then generously made up for with an added extra half an hour to our two-hour Graceland tour.

In each iconic space, Angie brought Elvis’ time at home to life with stories and fascinating insights, as she went behind the ropes into the depths of each room – something not possible on the walk-through tour.

Our group was particularly interested to know what was kept in the drawers, with Angie opening up several surprises from a Samurai sword in the Music Room, to Lisa Marie’s childhood graffiti in the kitchen.

After checking out the ground floor and noting that upstairs remains off-limits to the public as Elvis’ private space, we were guided down to Graceland’s basement. There we were treated to the sight of Elvis’ personal man cave in his pool room and TV room, with the latter featuring three televisions he watched all at once. The King came up with the idea after hearing President Lyndon B Johnson did this in The White House so he could view all three channels at once. Of course, famously The King even shot one of the TVs with one of his many handguns, a set that we later saw on display. 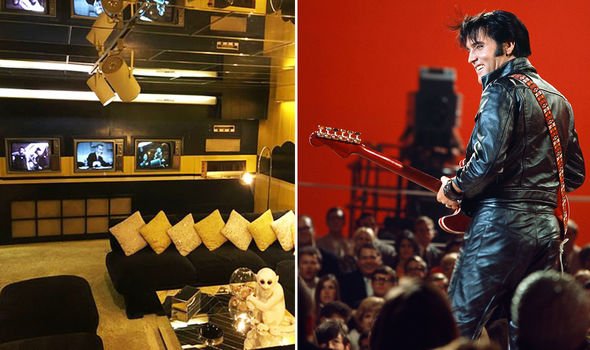 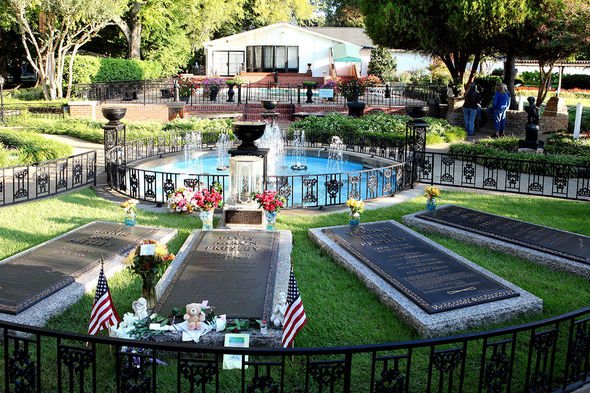 After seeing the downstairs of the mansion, Angie and her camera crew took us outside, pointing out the horses, racquetball court and trophy room. Sadly, we didn’t have time to venture into inside the last two, but Graceland have pointed out that each of the three virtual tours will be slightly different. If anything that’s given us an incentive to go on those ones too!

Before leaving the mansion for the Entertainment Complex on the other side of Elvis Presley Boulevard, Angie stepped aside briefly as the camera crew gave us a quiet moment in the Meditation garden by The King’s grave.

Elvis is buried there alongside his parents Vernon and Gladys, his grandmother Minnie and now his grandson Benjamin.

After paying our respects Angie invited us on board a shuttle bus with her as we headed over to see Elvis’ private jet the Lisa Marie aka Hound Dog 1 across the road.

Climbing aboard, the private plane felt like Air Force One with a touch of The King’s flamboyant tastes; from gold plated sinks and multiple TVs to even a hairstyling chair for meeting the press upon landing.

Next up, Angie took us over to Elvis Presley’s Memphis exhibit and entertainment complex to see his cars, sharing more stories of The King’s incredible life.

We also saw a pop-up exhibit marking the 50th anniversary of Elvis meeting in The Oval Office with President Richard Nixon, plus a room devoted to stars who have been inspired by The King which included a piano owned by The Beatles’ John Lennon.

Angie then concluded our unforgettable and enjoyable time by walking us through Elvis’ career via his clothes and costumes; beginning with his army uniform, through his movies and ’68 Comeback Special, right up to those iconic 1970s jumpsuits.

After two and a half hours, we can safely say that the $100 ticket for such a unique virtual tour is worth every penny. And that’s coming from someone who has physically visited Graceland.

After all, this is a unique, possibly one-off opportunity, with an Elvis expert and archivist who has worked at the mansion for some 30 years, showing areas of the mansion that are usually inaccessible on a regular tour up close and personal.

And if that weren’t enough, the whole live stream is available to rewatch as much as we want for 72 hours afterwards in the private Facebook group and Angie’s promised to answer more written questions there too. Whether a mega-fan or someone casually interested in Elvis, we’d highly recommend this virtual experience.

Tickets for Graceland’s Virtual Live Tours can be purchased here.