There’s never been a better time to celebrate musical collaborations. Ariana Grande released a charitable single, and Nicki Minaj‘s “Say So” remix is a massive hit. These two artists have worked together many times in the past, and are celebrating one another’s accomplishments now. Read on to learn more. 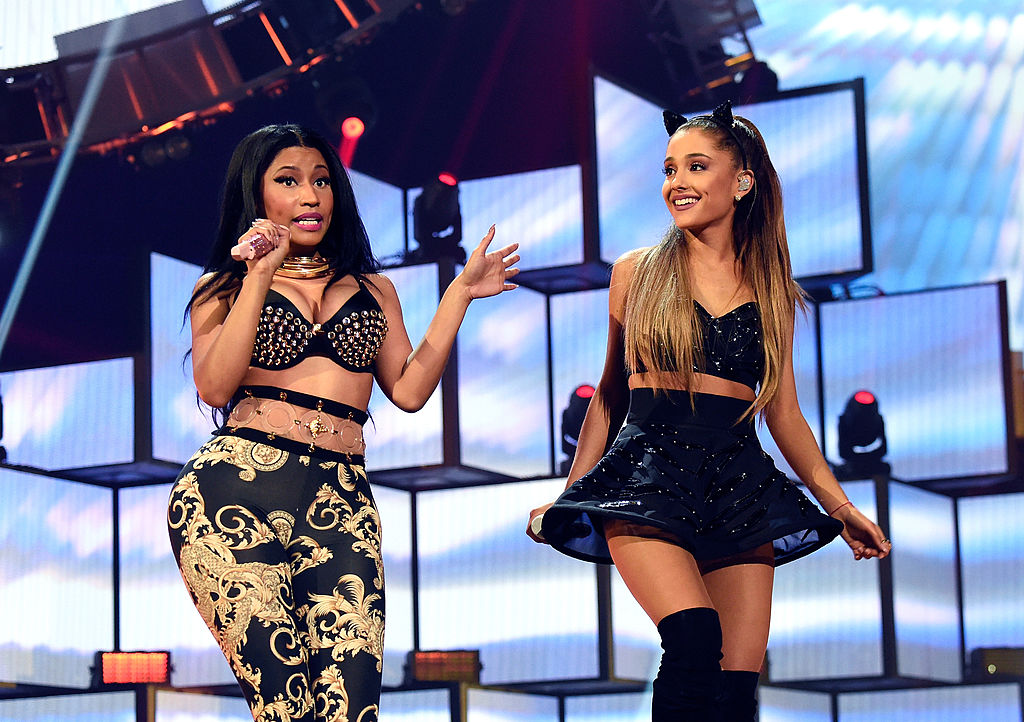 Minaj and Grande’s working relationship began with their song with Jessie J: the Grammy-nominated single “Bang Bang” in 2014. Then came “Get on Your Knees” off Minaj’s album The Pinkprint later that year. Just a couple of years later, they teamed up for Grande’s single “Side to Side” off 2016’s Dangerous Woman.

That’s not all. In 2018, Minaj released the single “Bed” off her album Queen, which Grande contributed vocals to. Days later, Grande’s first Sweetener promotional single, “The Light Is Coming,” debuted, co-written by and featuring Minaj. Finally, the rapper can be heard on “Bad to You” (with Grande and Normani), off the 2019 Charlie’s Angels soundtrack.

They’ve hung out outside of work, too

This friendship goes beyond just recording together. Minaj and Grande have performed their songs at major events, from the American Music Awards to the MTV Video Music Awards. It appears as though this has brought them close over the years, as evidenced by a Twitter exchange exactly two years ago.

On May 12, 2018, Grande tweeted, “I love my big sis @nickiminaj so f*ckin much.” Minaj quote tweeted her, reply, “I love my lil sis @arianagrande.” Grande then brought up a memory of the two having a spontaneous hangout, which the Thank U, Next artist deemed “the best morning of [her] life.”

Like so many popular female artists, people love to find a reason to pit Grande and Minaj against one another. But they won’t let that happen. When Grande was referenced in Minaj’s 2019 song “Bust Down Barbiana,” some believed that this was a negative callout. Grande vehemently denied this, writing, “there will never be anything but love between us ever.”

She continued, writing that Minaj has “been there for me (in real life) every time I’ve needed somebody.” Minaj then quote tweeted this, replying, “Not more than you’ve been there for me behind the scenes.” She added, “Love you. For life,” perhaps intentionally quoting one of her most popular songs.

Both have top songs right now

More than a year later, and both Grande and Minaj continue to prosper in their craft. Grande released “Stuck with U,” a collaboration with Justin Bieber that benefits the families of first responders during the coronavirus (COVID-19) pandemic. As for Minaj, her remix of Doja Cat’s “Say So” has sky-rocketed to the top of the charts.

While both are commendable, there’s a bit more of a historic angle to Minaj’s triumph. Not only is it her first No. 1 song on the Billboard Hot 100, but combined with the No. 2 song, “Savage,” it marks a groundbreaking moment with four Black women at the top of the chart.

Grande congratulates Minaj on her success, and Minaj returns the favor

Grande has “liked” a number of posts on social media celebrating Minaj’s success. She shared the Billboard chart on her Instagram Story on May 11, 2020, writing, “This is such an incredible moment in music… I love seeing this with all my heart.” She tagged all four women.

The same day, Minaj posted a screenshot in her own Instagram Story, of her playing “Stuck with U.” In text over it, she wrote, “My sister is unstoppable!! Congrats @arianagrande.” Grande wrote back simply, “I love u.” These two clearly have a friendship for the ages.