Brian Eno gave Anna Calvi some hearty homemade advice some years ago. "Making good records is like good Italian cooking," observed the British studio uber-chef behind Talking Heads, U2, Coldplay and other popular dishes. "You use very few ingredients but each is of the best quality."

It's 9am in London and the young apprentice is lying in bed watching the morning pass by the curtains. Half-Italian by birth, as it happens, maybe she's in no hurry to hit the kitchen because she knows today's meal is all cooked and ready to go. 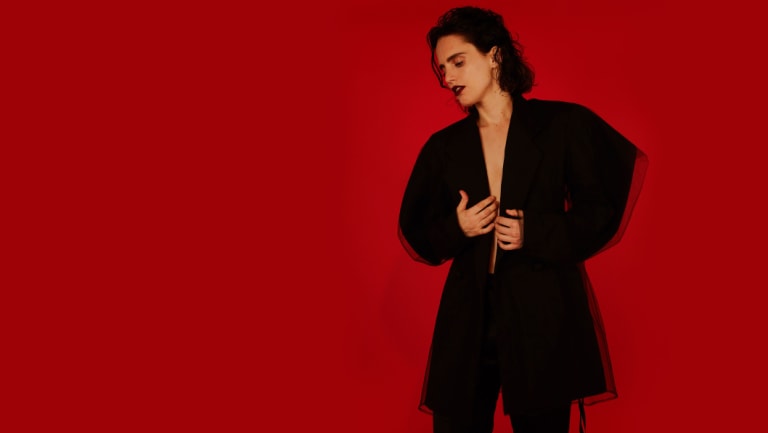 Hunter is her third album. Bad Seed Martyn Casey, Portishead's Adrian Utley and legendary producer Nick Launay are among the few carefully selected ingredients. But it's the overriding flavour of primal urgency and sexual liberation that overwhelms the senses.

"I wanted to explore what it is to be a woman, or a man, in that I find the way that we are pressured to conform to gender stereotypes kind of restrictive for everybody," Calvi says in a small voice possibly not long liberated from last night's sleep.

"Especially for me as a woman, I find the depictions of women in our culture to be very unrealistic to what being a woman really is and I wanted to challenge some of those ideas."

It’s a timely gauntlet to throw. But the English singer-songwriter-guitarist is clear that these songs – As A Man, Don’t Beat the Man Out of My Boy and Alpha to name a few – were all written before the hashtag that's turned the past year into a battlefield of recrimination and atonement for the gender-oppressed.

"Even before the 'me too' thing, I think there was a feeling of more women talking about their experiences and feeling not satisfied with the status quo – and not just women," she says. "There's been more voices [raised] in the queer community … it feels like an important moment to ask these kind of questions."

Casually open these days about her own sexuality, Calvi has flagged Hunter as "a queer and a feminist record". It arrives seven years since she trashed the pretty-good-for-a-girl ceiling with her guitar on her self-titled debut. Her second album, One Breath, dug deeper into her turbulent lower register in 2013.

"I'm always trying to use the guitar in conversation with my voice, so that where one stops the other one takes over," she explains. "Because this is a record about freedom, wanting to find freedom from any constraints, I guess I really wanted the guitar and the voice to be this unleashing of something.

With hindsight, Calvi can see how her surroundings conspired to keep her sedated from the age of eight or nine. Happily, her parents were both therapists: liberal-minded and encouraging of her preferences for Superman and football when dolls sent her to sleep.

"I felt – not from my parents, but from the world I was growing up in – confused as to why I wanted to play with swords and to play football and play guitar and why all these things seemed to be boy things," she says. "I didn't understand the stories I was told about princes and princesses and why anyone would want to be a princess.

"Even as a little kid, I feel that my feminist awakening was the frustration of how boring I found things that supposedly girls were into, and feeling like I must be a little boy because I was liking all of the things that they liked."

Calvi identifies an early jolt to her senses in the gender-challenging images and songs of David Bowie, whose work she has covered often – including on her 2014 EP with David Byrne, Strange Weather.

"When I was a kid, when I first started listening to [Bowie], I didn't realise what it was to be queer, or what he was doing, playing with gender, but it obviously did do something for me because I had a book of photos of him when I was nine, and I remember just staring at them and feeling really bewitched," Calvi says.

The Starman continued to loom large on Hunter, Calvi says, as a mutual point of reference with Launay, the producer best known for his ongoing association with Nick Cave. She met Launay, and bassist Casey, when Cave invited her to tour Europe with Grinderman in 2010.

"It was a really great collaboration because he's such an incredible producer and you know, he wants to make art. He's not interested in finding some way to make a hit record. He wants to make important work and he works incredibly hard and he's a bit of a perfectionist, like me."

Launay's eternal quest "to make something original" must have stood in stark relief to Calvi's recurring role as a judge of the British album competition for which she has twice been nominated, the Mercury Music Prize.

The pros of that gig, she says, "are that you get to listen to 200 albums. And the cons are that you have to listen to 200 albums. It made me realise there's a lot of music that I don't like. And there's a lot of just bad music. When you hear a record that's really good out of all of those albums, it's like finally getting a glass of water in the desert."

Hunter might be a case of third time lucky for Calvi, but it’s clear from the album's utopian visions of a genderless paradise that she has her eyes on a prize of much more historic proportions.

"I would like to think it's coming," she says. "I think these things come in waves, but in general, yes, I think we’re moving towards the right direction. I think ultimately we need to have a system where one person's gain isn't at the expense of another person's oppression. That would be the ultimate success."

Hunter is out today.