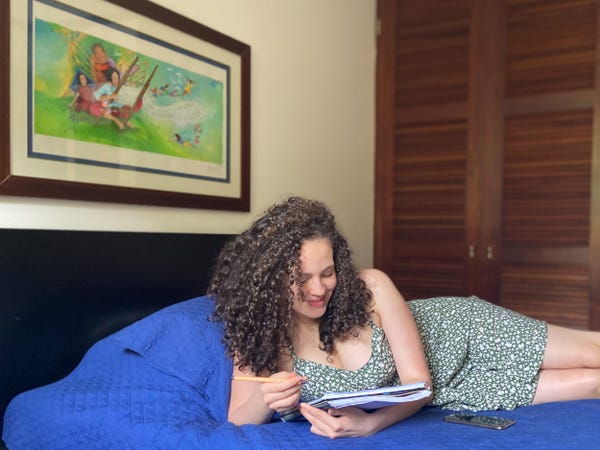 "I packed a half an hour before I went to the airport because I stayed up with my friends, which I'm grateful for now because it ended up being my final night in my dorm," Condo told Business Insider in a recent video call.

Condo thought she'd be back at the University of Minnesota, where she is a sophomore studying acting, just a week later. But when the coronavirus pandemic began to spread across the world, she got stuck in her home country for the remainder of the semester and the summer.

Now, Condo is two weeks into the fall semester — and she's taking all her classes from her parents' homes in Costa Rica. She said the university stored her belongings in a storage unit until the first day of fall classes.

"I hired a moving company to move my things from the storage unit to my off-campus apartment, which I'm paying the lease for," she added.

In an email to Insider, Caitlin Hurley, a Public Relations Strategist at the University of Minnesota, said students were not required to move their belongings from storage units on the first day of classes. The spaces, Hurley said, are available until November 7.

In the same message, Hurley explained that many faculty members have completed a five- or nine-week online course to help with the transition from in-person to online learning. On top of that, the university developed a website to guide students through the shift to remote learning.

Here's how Condo is balancing her new schedule.

Condo goes back and forth between her mom's house and her dad's every two weeks. 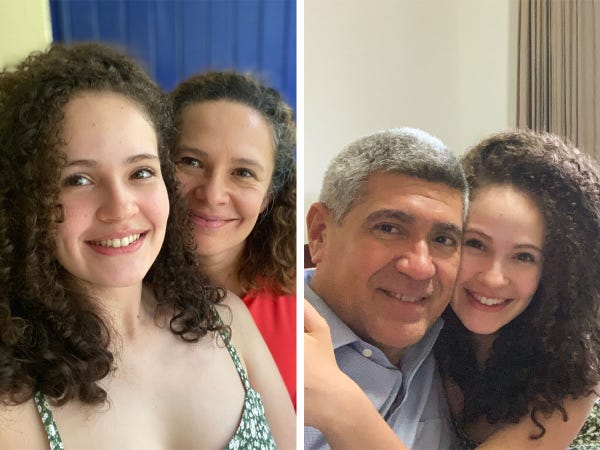 "At my dad's house, I'm living with my two brothers. One of them is 16 and the other is seven," Condo said. Condo's father and stepmother also live in the house.

When she's living at her mom's, Condo says her days are "significantly more chill."

"It's just my mom and me, which is nice," she told Business Insider. "It's a good balance."

Condo's mother lives in Escazu, San Jose, and her father lives about three hours away by car. 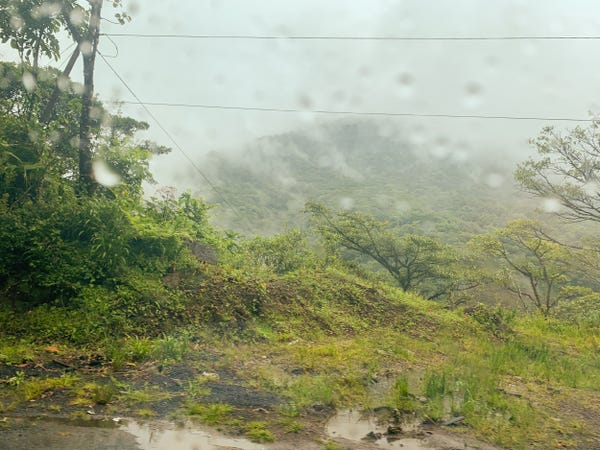 Condo describes her environment at her dad's as isolated and spacious. "It's really nice because I'm surrounded by nature," she said.

Here's what Condo's days are like when she works from her father's home.

Condo's father works at an agricultural university and lives in a house on campus. It's full of wildlife, Condo says. 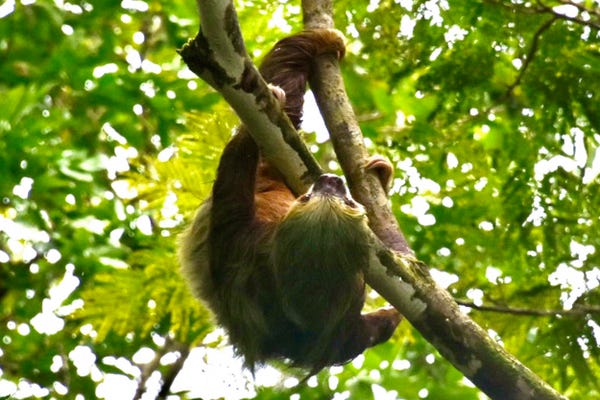 "Monkeys are very common," she told Business Insider, "and I know my dad saw a sloth the other day."

Condo said if she had the energy in the mornings, she'd walk around the campus because it's so beautiful. "Sometimes just for a moment I'll step out and listen," she added. "The monkeys are super loud."

This is Condo's schedule. She takes nine classes, plus rehearsal every weeknight and on Saturdays. 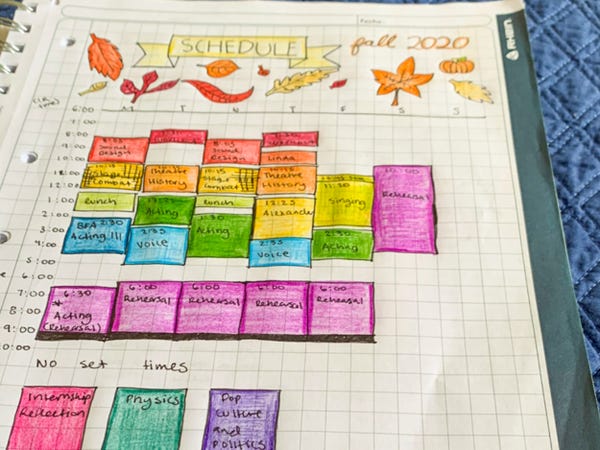 Classes start at 10 a.m. on Mondays and Wednesdays, and 8 a.m. on Tuesdays and Thursdays.

Condo wakes up at 6 a.m. on weekdays. The first thing she does is check her phone. 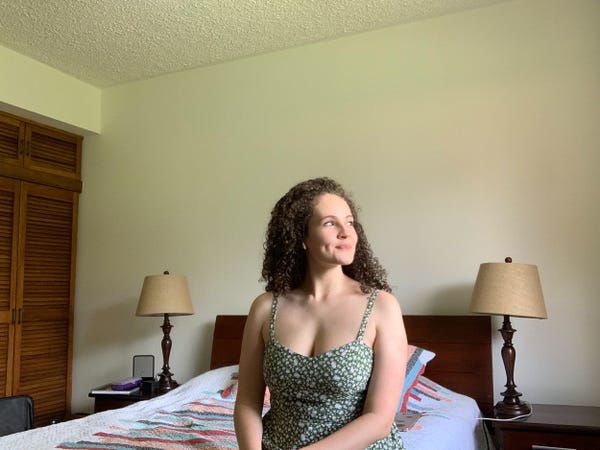 Being in Costa Rica means Condo's schedule is an hour behind her classmates' in Minnesota. She prefers it that way, she says.

After getting up, she heads to the patio for some morning yoga. 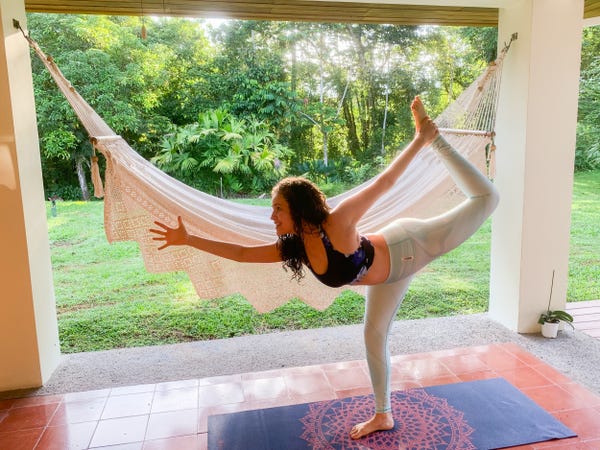 Sometimes she swaps out yoga for other light exercises to get her body moving before starting the day.

Condo eats eggs in the morning when her stepmother cooks. 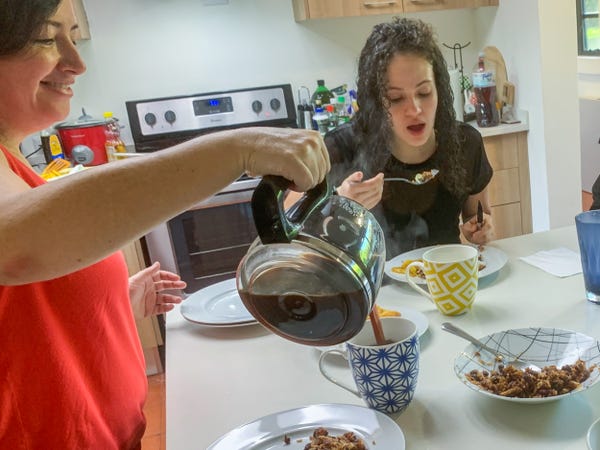 "I'm usually too lazy to make eggs myself unless I'm really craving them," she said. "Sometimes I have tortillas with cheese too."

Her theater history course begins at 10 a.m on Monday and Wednesday. 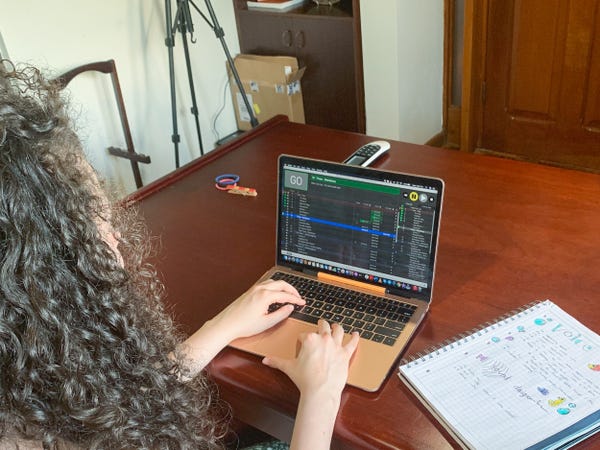 Condo said she takes most of her classes in this office at her dad's because it's the room with the best internet connection.

At her mom's, Condo studies in her bedroom.

In this class, Condo performs sonnets to classmates over Zoom. This means she selects another student to look at while performing. "It's so strange," she said. 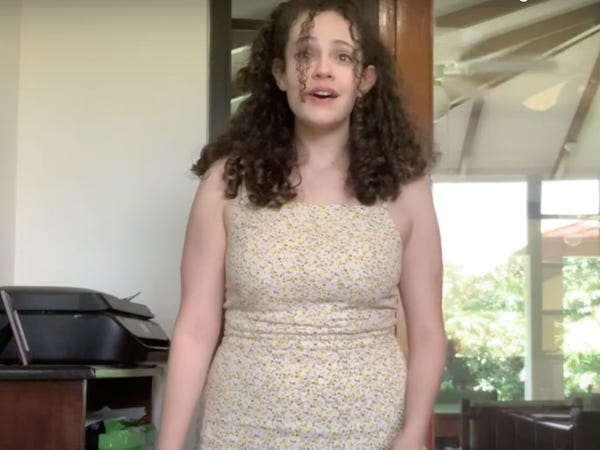 Condo says that when she attended class in person, students still selected another individual to perform sonnets to, but they would stand farther apart.

"Now you see their face more clearly because we have to be sitting close to the computer," she added.

On Tuesdays and Thursdays, Condo has a class devoted to stage combat. She uses a stick as a prop. 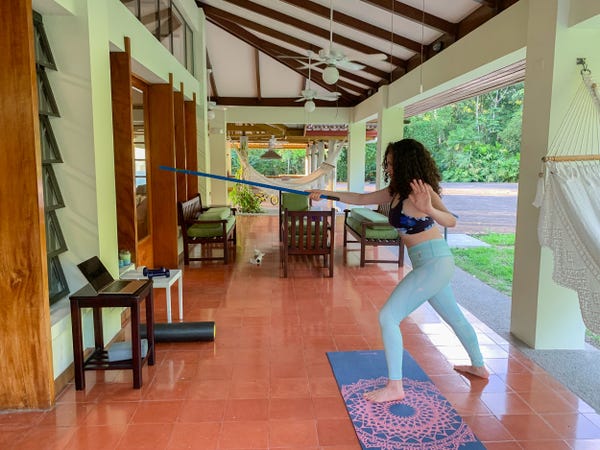 Condo participates in stage combat outdoors, "so I'm not worried about hitting the walls or breaking anything," she told Business Insider.

In between classes, Condo has 15-minute breaks, which she uses to get a snack like fruit. 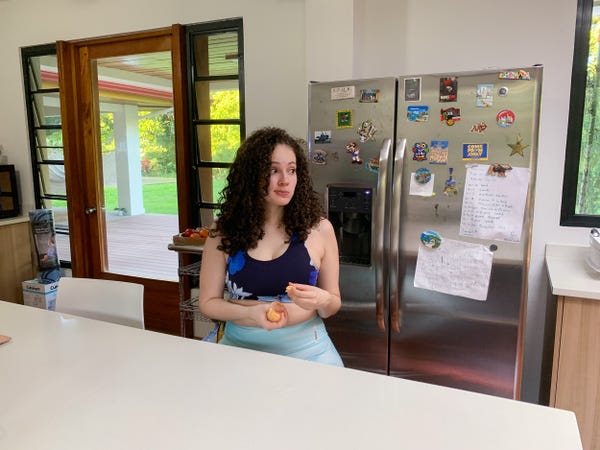 Condo only has time for lunch twice a week because of her packed course schedule.

In the afternoons, Condo has voice classes, where students learn to speak in various accents. 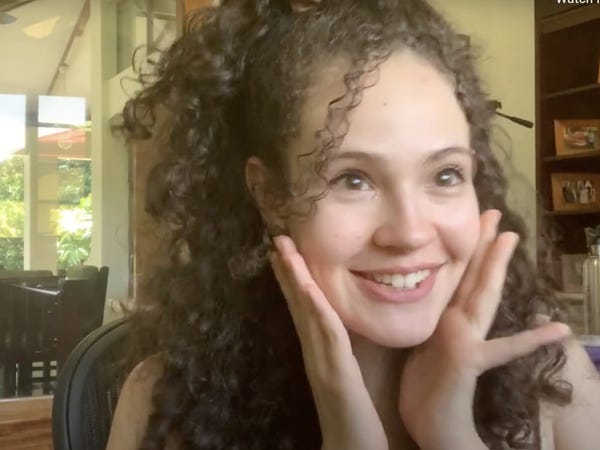 Condo said that some of her assignments for this remote class will be videos rather than live performances.

"I'm still trying to figure it out, frankly, it's a lot of hours staring at a screen and trying to be present," she told Business Insider.

Also in the afternoons, Condo takes an acting class. This, she said, is where some of the biggest differences between virtual and in-person coursework come into play. 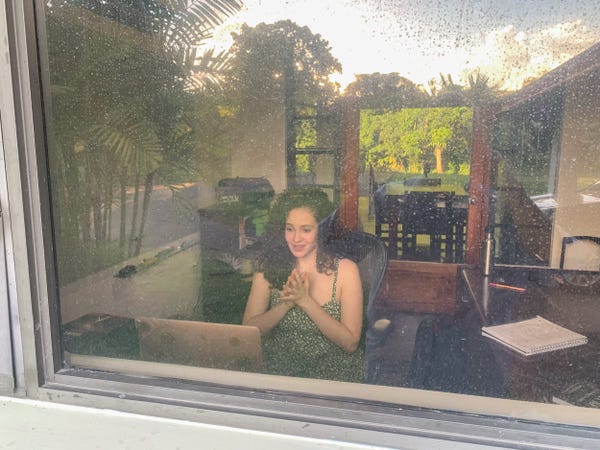 "Having to be resourceful and creative with the changing circumstances definitely exercises your creativity and flexibility as an actor," Condo said of rehearsing and performing over Zoom.

At 6 p.m. on weeknights, Condo has rehearsal for a play she will star in over Zoom. 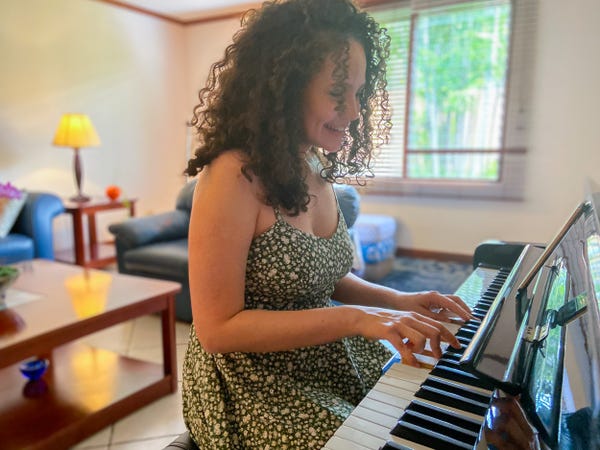 "It's going to be the first time we do something as a company to present to the public in a very weird way," Condo said of the school's rendition of "Appropriate" by Brandon Jacob Jenkins.

Most of the play takes place in a house, she told Business Insider, so she's not concerned about adapting her setting for the occasion.

"We make do and try to be creative within the circumstances," she added.

After rehearsal, Condo has dinner with her family and then reads to her little brother. 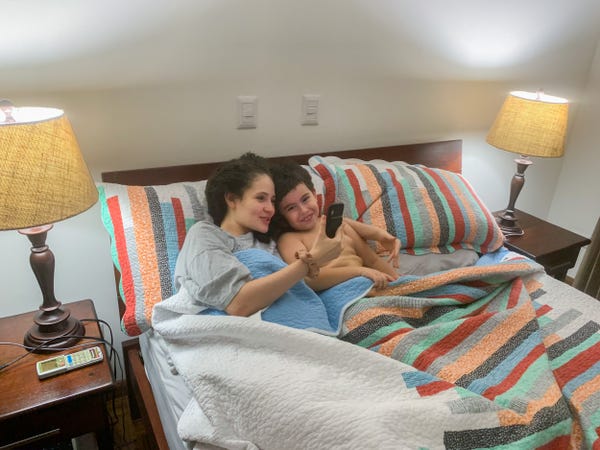 "My seven-year-old brother is scared of the dark," Condo told Business Insider, "so he sleeps with me many nights and I've been reading Harry Potter books to him."

She reads the book from her phone and uses the opportunity to practice her accents for voice class.

"It's really nice bonding time," she added, noting that spending so much time with her family is a perk of being home.

After her brother goes to sleep, Condo gets some rest herself. 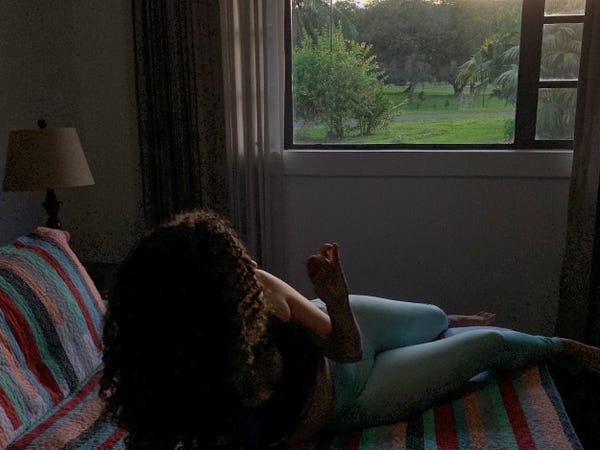 Condo doesn't know when she'll be able to go back to Minnesota.

"I want to be back as soon as possible," she said, "but I'm happy to avoid at least a little of the winter."

Condo misses her theater community and independence more than anything, she says.

"Being able to hug my friends, my teachers, work on scenes in person — there is such a beautiful and intimate aspect of sharing a space in person that we're trying to replicate on Zoom, and that everyone is really doing their best with," Condo told Business Insider. "But it'll never be the same."