During the early days of the pandemic, HBO Max’s 10-part series Love Life—with its nuanced depiction of what it’s like to date, fall in love, have your heart shattered, and attempt to do it all over again in your 30s—was one of television’s bright spots. The cast was an embarrassment of riches when it came to next-gen talent, actress Zoë Chao included. Cast as Sara Yang, best friend to Anna Kendrick’s character, Darby Carter, Chao delivered a nuanced portrayal of a seriously messy character. She’s an actress who has that very rare ability to disappear into the characters she plays while still bringing her own humanity to each of them. Chao also lends this talent to Amazon Prime’s Modern Love, created by John Carney and based on the popular New York Times column of the same name.

In the second episode of Season 2, out today, Chao plays Zoe, a woman living with a circadian rhythm disorder called delayed sleep syndrome. When most of the world is abuzz during daylight hours, she’s asleep. And her daytime? It begins at sundown. Adapted from a 2016 piece written by Amanda Gefter, Chao stars alongside Gbenga Akinnagbe who plays her love interest, Jordan. Their meet-cute during the wee hours of the morning at a Brooklyn diner is rom-com gold. It’s one of hope, of what it means to compromise, to figure out a way around a problem when love is there but a slightly massive roadblock stands in the way.

In advance of the episode’s debut, BAZAAR.com caught up with Chao over Zoom, from her couch in Brooklyn, fresh off shooting her new Netflix film, Senior Year. 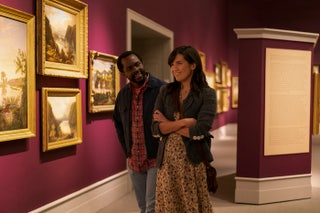 Were you familiar with the column before you got the part?

I was familiar with it as a podcast actually. But I hadn’t watched any episodes before or read any [columns]. But it was always something that I wanted to do. And it was cool, because it was the first project that I shot back from the pandemic, even though we’re still in it. I was reteaming with Jesse Peretz, who directed it, and Ant Bregman, who produced it, and I’ve worked with both of them, so it felt like a really gentle easing back into being on set after many months away. They made it such a safe experience.

Of the episodes that you listened to on the podcast, were there any that you particularly loved?

Embarrassingly, no. I know it as a podcast, but I have not listened to it. I listen to a lot of true crime.

You and most of the country, right?

Even though I tend to be in a lot of rom-coms, I pursue really depressing material and content. I love Scandinavian murder, detective stuff. And I love, like, really sad dramas.

It’s how you balance yourself.

Yeah, totally! I also think watching stuff that is so sad and depressing just inevitably kind of makes you feel better about one’s own life. It’s like, “Well, at least I’m alive.” I’m not murdered, yet.

Yet! That’s a win. How did the scripts come to you?

Jesse and Sarah Heyward, who wrote the piece, actually named the character Zoe in hopes that I would actually get to play it. Jesse was like, “I have this script. I hope you’ll do it. I hope you’re free.” And I was like, “Sure, sure.” But I never get my hopes up. But then, it happened, it all happened! And this is now the second project in a row that I’ve done where I play a Zoe.

Modern Love does such a good job at capturing the beauty and the mess of opening oneself up to the possibility of love.

What was your first reaction to this story? Obviously, the team behind the show was compelling, but what about the story felt compelling?

I love the premise of Modern Love, which is that they’re all real stories about real people. And I think it’s a compelling container. It’s a half an hour and you cover a lot of ground, they’re like mini movies. What was so, kind of, daunting about signing onto the project is that you have to convey a lot in such little time. I was nervous to meet Gbenga, more so than I have been meeting other love interests, because you just have more time to suss each other out and build something together. We shot in a week.

Modern Love does such a good job at capturing the beauty and the mess of opening oneself up to the possibility of love, and any kind of love. There’s this fairy-tale aspect to the piece. Two people living very different lives, on opposite ends of the day, with different awarenesses about the same worlds, kind of. And I think, while delayed sleep phase syndrome is a real condition that is no doubt challenging, I think what’s beautiful about the piece is that it’s very relatable to everyone.

I think it is a real miracle when two people find each other, and then decide to do the thing, because everybody has different rhythms and preferences, and different opinions and baggage and experiences. Bell hooks says something like, “We don’t have to love, we choose to love.” And that love is an action. It’s never simply a feeling. This story, it starts with feeling, but I think it’s like, ‘Okay, this is going to take a lot of work to make this happen. But I care about you, and there are so many more pros than there are cons.”

Every couple has to negotiate that; has arrangements and agreements. That’s what really spoke to me. But her definition of love is the will to nurture our own in another’s spiritual growth, which I thought was the most succinct mission that really resonated. And I feel like they both are so invested in each other and each other’s happiness that they’re like, “Okay, we’re going to be tired sometimes, but we’ll steal any seconds we get with each other.”

That moment that you guys are on the street after you miss the brunch with his mom is when I started crying. There was this feeling of, “God, we’re so good together, but there’s this thing that’s making it not be, and how do you get around that thing?” You think of so many relationships that don’t work out, because it’s two people that can’t make the thing work.

Yes. I completely agree. You have a wonderful chemistry with Gbenga. I want to just talk about that one scene when you guys are in bed and you bring up the Real Housewives. Was any of that stuff ad-lib? Did you put any of yourself into these things, or was that all script? Because it does feel so natural!

That’s great. That’s great to hear. No, it was all scripted. But also felt very real to me too. I love me some Housewives.

Do you, in real life?

I do. I do. It’s sporadic. There’s true crime, and then there is survivalist shows that I really love. Like, any reality show that takes place in Alaska or in really challenging places like Vancouver or Patagonia, like Alone, I really love. But then, I will also engage in, like—Very Cavallari is my sister’s favorite show, which I will watch sometimes. And then Housewives, my mom watches and I will watch with her. I’m like, “What is this?” Some anthropology in the field study? I can’t figure it out.

I am also really curious about the kind of research that goes into playing your character who has circadian rhythm disorder. Did you talk to Amanda, the writer of the piece?

I did read her piece, and I did research on it. I’m so much more in tune to people that operate at night now than I was before. There are whole forums and communities devoted to this, so I just did reading and then just was with the script a lot.

It’s interesting, there’s something about Zoe that reminds me of my mom—the people that she loves or she’s very available for. She is, I think, just more distrusting or uninterested in most people in general, which is very different from me. Zoe, the character, is very protective of the robust life that she has at night and the people that also share her hours. I feel like letting Jordan in was a thing. 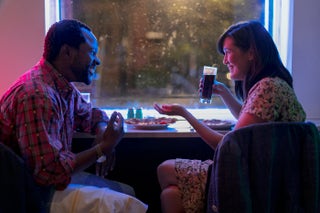 I think she certainly makes the most of it. I was like, “God, this sounds terrible to live with something like this.” But she’s not a victim.

I agree. I think the way she was written and the way Amanda talks about it, too, there’s no apology for it, there’s no sense of lack. In fact, there’s a pride. I think the way she wants to protect that life and not apologize for it, but to sort of be like, “I’m sorry for you, that you don’t have access to the things I get to see. And I don’t envy. This is the way I was made, and I make no apologies for it,” is very cool. It’s not like, “I live a disordered life.”

These stories resonate so deeply with people. Why do you think that is?

I think these stories can offer a lot of comfort and can act as a balm, or like a salve. If anyone is interested in humanity, this is a show where people are being very human. And they’re real stories. And I think it does such a good job capturing all the different kinds of love. We all have this idea of what love should be. But then, you watch the show and you’re like, “Oh, it comes in all shapes and sizes and configurations, and there’s no one way to go about it. And you’re not late, and you’re not wrong.” And I think that can be nice.