The man hailed the ‘world’s most popular sperm donor’ has dismissed fears that his children might unknowingly meet and form incestuous relationships.

Kyle Gordy, 27, of Los Angeles, California, has fathered 18 children across the US over the last four years – and has five more on the way.

The donor admitted there has been concern that his children might unwittingly ‘bump into’ their half-siblings and form potentially problematic relationships.

But he explained he has tried to preempt any issues by offering to introduce the parents of his children online. 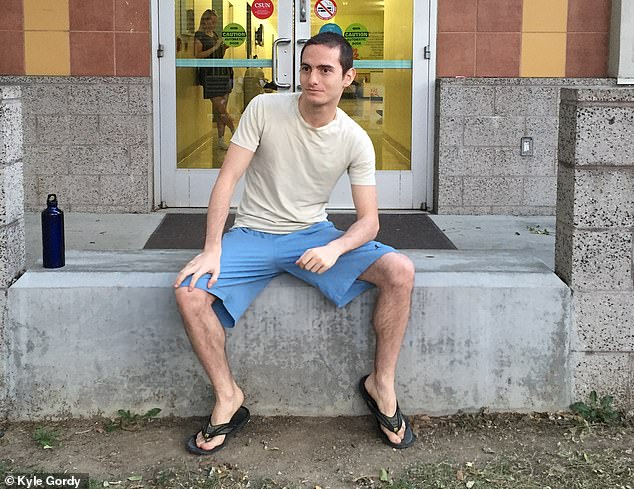 ‘World’s most popular sperm donor’ Kyle Gordy, 27, of Los Angeles, California, has fathered 18 children across the US over the last four years – and has five more on the way. He explained he is not concerned that his children might unknowingly form incestuous relationships 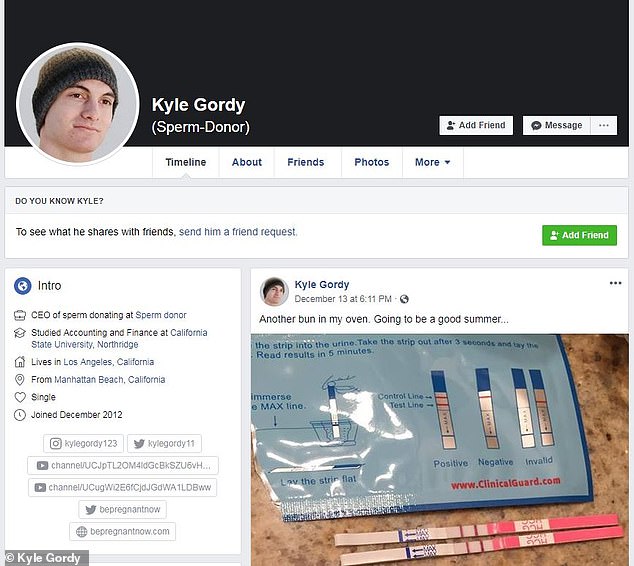 Kyle, whose Facebook page (pictured) promoting his services appears to have been removed, previously told how he receives some 100 requests every month

Speaking to New! magazine, Kyle told the story of one woman who had given birth to his child and was concerned that an acquaintance might soon enlist his services.

‘”I don’t want you to do it”,’ Kyle recalled her saying. ‘”She lives nearby and our kids could bump into each other”.’

He continued: ‘I explained that as my donations increased, I’d set up a private Facebook group so women I’d helped could share photos or concerns about their children accidentally meeting.

‘I said that due to this I wasn’t too concerned about any of my offspring inadvertently meeting and potentially forming incestuous relationships.’

Kyle, whose Facebook page promoting his services appears to have been removed, previously told how he receives some 100 requests every month. 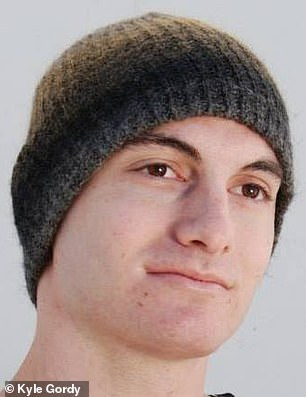 The majority of Kyle’s sperm is artificially inseminated, however he does also offer ‘natural’ insemination, which requires him to have sex with women. Pictured, Kyle Gordy

But he usually selects between two to five people to help a month, after speaking to them and listening to their individual stories.

The majority of his sperm is artificially inseminated, however he does also offer ‘natural’ insemination, which requires him to have sex with women.

The service is not illegal as no money is offered in exchange for his sperm.

Kyle first decided to donate his sperm in his early 20s when he realized that he simply got too bored in relationships.

His first clients, a couple, now have a four-year-old and a 14-month-old — both through Kyle’s donations.

Since then, he’s donated sperm in Los Angeles, San Francisco, Colorado, and Texas — and he wouldn’t mind taking his swimmers overseas next.

‘If anyone in the UK wants my services I am happy to travel. I’d go anywhere to help women out, apart from North Korea or any war zone,’ he said. 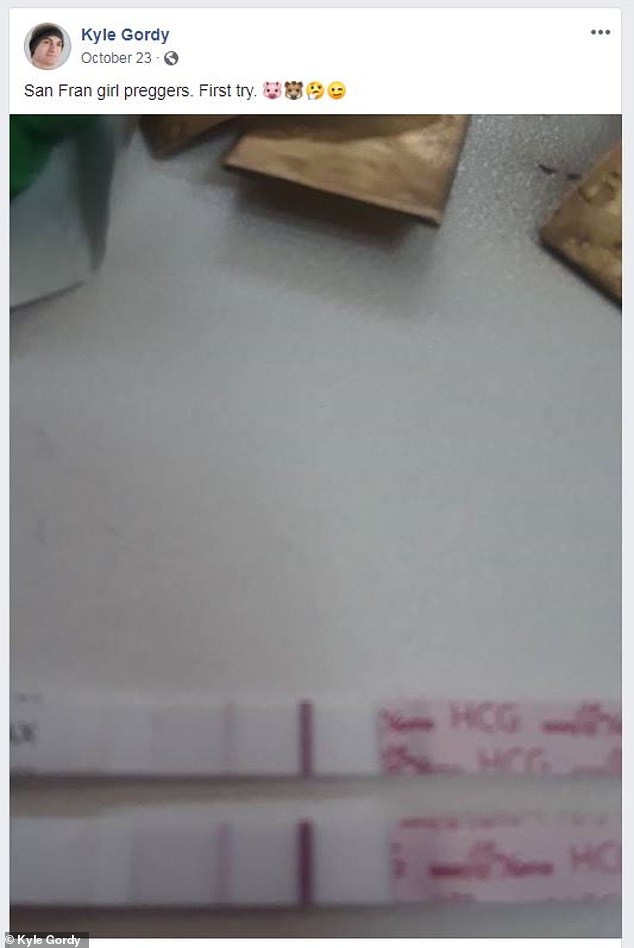 Kyle shared photos of positive pregnancy tests online, pictured, but the page has been removed. He set up a private Facebook page where parents of his children could meet

His clients have ranged from 18 to 42, and he gets ‘lots of repeat business’. Though he doesn’t discriminate based on age, he does make sure that the child will be supported financially.

Kyle also insisted that there are several good reasons for choosing him over going the sperm bank route.

He says he comes from a good family, with two educated parents — a lawyer father and programmer mother — and will be passing down those genes.

He also argued that sperm banks may have trouble tracking the offspring of repeat donors — so those offspring may not know when they encounter a brother or sister — but there’s no such risk with him, since he has a Facebook group for the families he donates to. 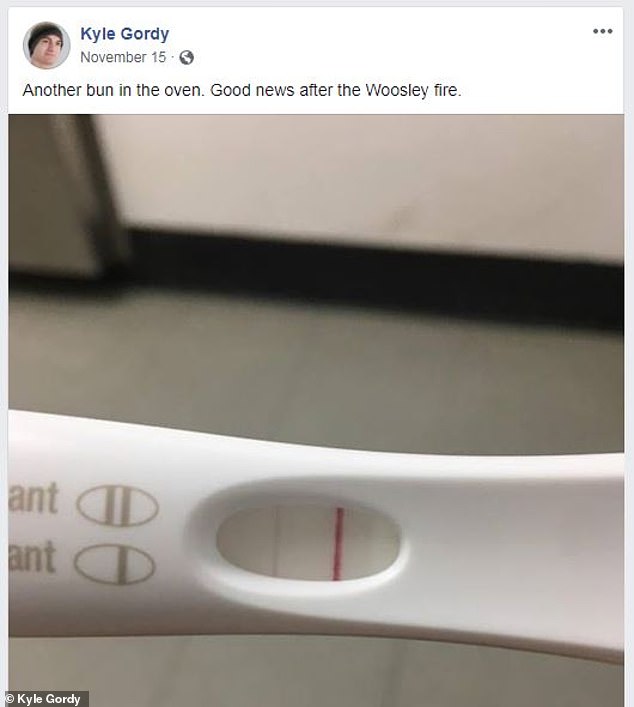 Kyle shared this image of a positive pregnancy test on Facebook in November last year. There are understood to be at least five women expecting his children this year

Though he’s not taking on a traditional parenting role, he does feel a ‘satisfaction’ in having children and hopes to have a giant Father’s Day party with all of his biological offspring in 20 years.

His own parents have mixed feelings about his donation habits. He said they are supportive, though his mother often reminds him that they are not really his kids.

‘Overall, they’ve been fine about it though. My brother makes a lot of money and I make a lot of children,’ he said.

Kyle first made headlines in 2014 when he first started donating his sperm and was working towards his master’s degree in accounting.

Speaking to 20/20, he helpfully listed the traits that he thought made him a desirable sperm donor.

‘I don’t do any drugs. I don’t smoke. I don’t drink. I don’t drink caffeine. I eat only sperm-friendly food: wheat, brown rice … fruit and vegetables,’ he said.

‘Right now I’m attending university. Both siblings are engineers. The nuclear engineer is my twin. My grandpa was a scientist.’

He also offered photos of himself as a child and bragged about his IQ.

Gordy told ABC News that he was not just looking to have sex with women, but to genuinely help them to have a child.

‘I’m passing on my legacy and giving these people kids,’ he said.

By that point in his career of donating, he’d father just one child and was working on another insemination.