Women have revealed the most shocking cases of fragile masculinity they have ever come across in a viral thread on Reddit.

The post kicked off when one user asked fellow users on the online forum what the worst case of fragile masculinity they’ve ever dealt with was on Saturday, March 16.

And it wasn’t long before the results began rolling in, as almost 1,000 people have revealed the shocking and bizarre scenarios they have found themselves in. 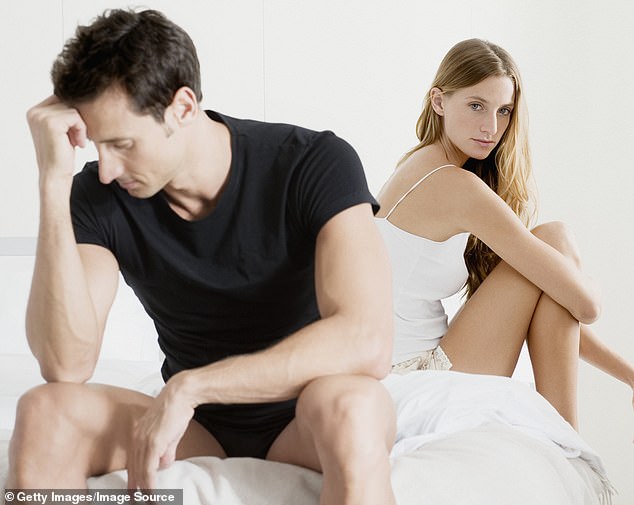 Hot topic! People on Reddit have been discussing the ‘worst’ case of fragile masculinity they have ever experience before (stock image)

Bizarre! Almost 1,000 users on Reddit have revealed the ‘worst’ cases of fragile masculinity they have ever experienced in a viral thread that began on Saturday, March 16

One user on the platform revealed that she has a friend whose boyfriend won’t hold his son’s hand because he finds it strange.

User PrettyInteraction62 wrote: ‘I know someone whose boyfriend won’t hold their 3 year old son’s hand because that’s “gay and weird”.’

Replying to the comment, one user said they felt sorry for the ‘poor’ child.

Another similar situation was revealed by user fantastic_watermelon, who said: ‘My brother in law has a friend that doesn’t let his infant son suck his thumb because it leads to being gay.’

In response to the comment, user Lethal-Muscle said: ‘Wow, imagine being so insecure in your masculinity that you sexualize your toddler.’

Another bizarre story surrounding fragile masculinity came from user PasionatelyRational who revealed an incident that occurred between to of their friends at university.

They said: ‘Friends from uni were a couple and in the same class. She got a better grade than him by 0.5 and he threw a tantrum in front of everyone about how she constantly wanted to humiliate him.

‘Then looked over to me and other classmates that couldn’t help to stare (because he was making a scene) and screamed at us “yeah I’m dumber than my girlfriend, hope you’re enjoying it!” And left.

‘She broke up with him after that and he dropped the class. But it was such a wtf moment that I still remember it,’ they added.

Similarly, another user revealed a college-related story that involved two boys becoming annoyed after they realized Luna bars ‘were originally made for women’.

Crazy: Hundreds of responses rolled in under the post, as people revealed bizarre stories, including one user whose ex-partner wouldn’t eat a ‘popsicle’ or a ‘chocolate covered banana’

The user, VirginWhales, explained: ‘Went to college with two brothers. They were complete opposites. The older (OB) was the epitome of toxic/fragile masculinity. He was the typical 6ft2in, buff jock, who was a total tool.

‘The younger (YB), was a total goofball, always making people laugh, just an all around genuinely good guy.

‘Their mother used to buy them Luna Bars, which were originally made for women. When OB found this out he was furious, which is stupid itself, but it gets better.

‘YB decided to f**k with him and tell them there was estrogen in the bars. OB had a full on meltdown and even went to the mirror to check if he had started developing boobs,’ they added.

One user said an ex-boyfriend had a problem with her hanging out with her best friend, as he said the friend was ‘too seductive’.

When her boyfriend was referencing the ‘seductive’ behavior, he was referring to his girlfriend ‘dancing’ with her best friend.

The user, MadameStrumpet, explained: ‘My ex had an issue with any time I spent with my best friend. His words “she is too seductive” and “you’re too close” meanwhile she’s happily married and pregnant.

‘”Too seductive” was dancing together at a club (before pregnancy) because he wouldn’t and that meant she had “dirty” fun that he didn’t have first,’ she added.

One woman said her ex-boyfriend would refer to the men she was intimate with previously as her ‘dirty past’.

Ludicrous: Another response to the thread included one from a Reddit user who had an ex-boyfriend who didn’t like her ‘dancing’ with her best friend because he said it was ‘dirty’ fun

The same woman said her ex-boyfriend ‘couldn’t handle’ when she told him she thought a celebrity was ‘hot’.

User falkoressa explained: ‘He kept referring to the fact that I had sex with a couple of men before him as my “dirty past” and randomly get moody and all hurt because it crossed my mind. It was completely infuriating!

‘He also couldn’t handle me saying that a celebrity is hot!! Very fragile indeed…’ she added.

Another user revealed that a man she once went out with wouldn’t eat churros or a chocolate-covered banana, because they are ‘phallic’.

The user, Jbsbm, said: ‘A guy I went out with wouldn’t eat a popsicle or a chocolate covered banana or churros or whatever with me at Knotts because it’s phallic and he doesn’t want a gay guy to see and make him feel gross.

‘Yeah, I didn’t see him after that,’ they added.

Similarly, someone detailed that one of her ex-boyfriend’s refused to use straws, and called them ‘sissy sticks’.

Another bizarre story came from user trixkzy who saw another post on the social forum, in which it was revealed that a man once asked his partner to eat less so that he could look more manly.

‘A post in another subreddit right now. This guy is wondering if he’s an a**hole for asking his wife to eat less food because he feels emasculated when she eats more then him.

‘Imagine asking your partner in life to go hungry because of your ego,’ they added.