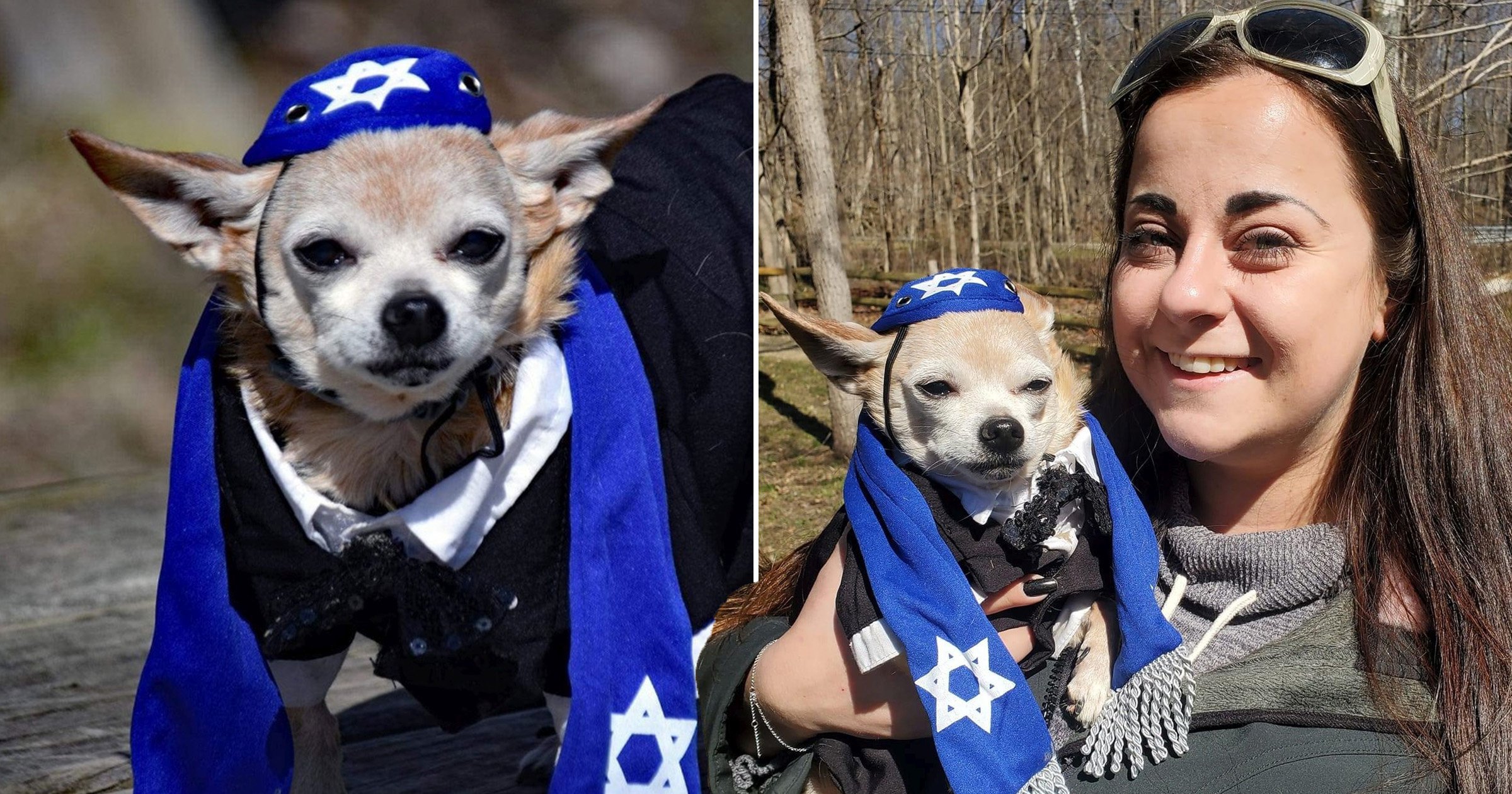 Bradley the dog got a rather special celebration for his latest birthday, with owner Ashley Sherman throwing him his very own ‘bark mitzvah’.

Ashley, who was raised in a Reform congregation and values her heritage, hosted the doggy version of a Bar Mitzvah as a way of celebrating her Chihuahua’s special day.

Bradley was papped in his own kippah (head covering) and tallit (shawl) alongside stuffed toys to represent the Torah and a rabbi.

Ashley, 34, says: ‘I don’t have children, so I am a pretty “extra” mum to my dogs, they’re the ones who get celebrated and supported.

‘It’s also nice to be able to connect with my heritage and bring it through with my dogs. I know it’s only a little thing, but I had a blast with it.

‘We’re going to throw a “Bark Mitzvah” party at the dog park once the weather starts getting warmer and invite all of his little dog friends to come.’

‘There was no Rabbi involved,’ she adds. ‘There is a fine line between fun and sacrilegious that I didn’t want to cross.’

When Ashley, from Cleveland, Ohio, shared the pictures of Bradley on Facebook, she inspired dog lovers to follow her lead and celebrate their pet’s coming of age.

Ashley, who works as an industrial recruiter, now plans to have a party with Bradley’s doggy buds to celebrate the occasion once the weather warms up.

‘I was raised Jewish – I had my Bat Mitzvah, my brother had his Bar Mitzvah. I was raised in a Reform congregation, so we’re a bit more relaxed about it.

‘I attend synagogue on the holidays, my faith is an important thing to me.

‘I had been talking about having a ‘Bark Mitzvah’ pretty much ever since I got him as a puppy. I just thought that it would be a fun, cute idea.

‘Bradley’s getting older, so it’s really meaningful to have these pictures of him.

‘A lot of times, people will wait until their dog is in poor health before they get photos done. I just wanted to make sure I got him at his prime.

‘He had his own kippah and tallit, I was able to get them off Amazon. I guess there’s a market for “Bark Mitzvahs” online.

‘Judging by the comments I was getting, I have a feeling that “Bark Mitzvahs” are going to be the new hot thing.’

Ashley also has six-year-old Chihuahua Freddie, and plans to throw him his own Bark Mitzvah when the time comes.

‘Freddie is going to be seven in June, so he’s a bit off from his Bark Mitzvah but he’ll get one when he’s of age too,’ she says.

Sadly, Ashley’s parents were unable to attend but were substituted by toys for the photos.

Ashley says: ‘My mother, Bradley’s real bubbe [grandmother], is in poor health and is in the hospital, and my dad, Bradley’s zayde [grandfather] was staying with her there, so they were unable to attend.

‘So we had them there in spirit represented by the dolls.

‘In the picture with the toys, there is the mensch [person of integrity and honour] on the bench, representing the rabbi.’

The images were shared on Facebook on April 14th, the post has been shared more than 2,500 times and has racked up more than 3,600 comments.

Ashley adds: ‘I was totally blown away by the reaction I got. I just thought it was a silly little thing I did with my little family, but it blew up way more than I expected.

‘People were loving it, they were wishing him “Muzzle-tov”. I saw a lot of people commenting that it was the best thing they’d ever seen on the internet.’

One commenter said: ‘Bark Mitzvah! Just when I think I’m the most ridiculous dog mom, you all prove me wrong! I absolutely love it! Mazel tov!’

Another wrote: ‘What a noble little gentleman. Muzzle tov,’ while a fellow supporter added: ‘He’s moved from being a good boy to being a good man.’