A woman has detailed how she found out her long-distance boyfriend was allegedly cheating on her after checking her blocked list on Instagram, admitting that she still moved from the US to the UK to be with him before their engagement imploded.

Gabby Marcellus, 25, from New York, shared her shocking story in a series of TikTok videos, explaining in one viral clip that their relationship started to unravel after she learned just how far he would go to keep his infidelities secret.

‘I’ll never forget the day in 2018 when something told me to check my blocked list on Instagram,’ she said. ‘What did I find? A random girl. What did we have in common? My boyfriend. Now I didn’t block her, so you can guess who did.’ 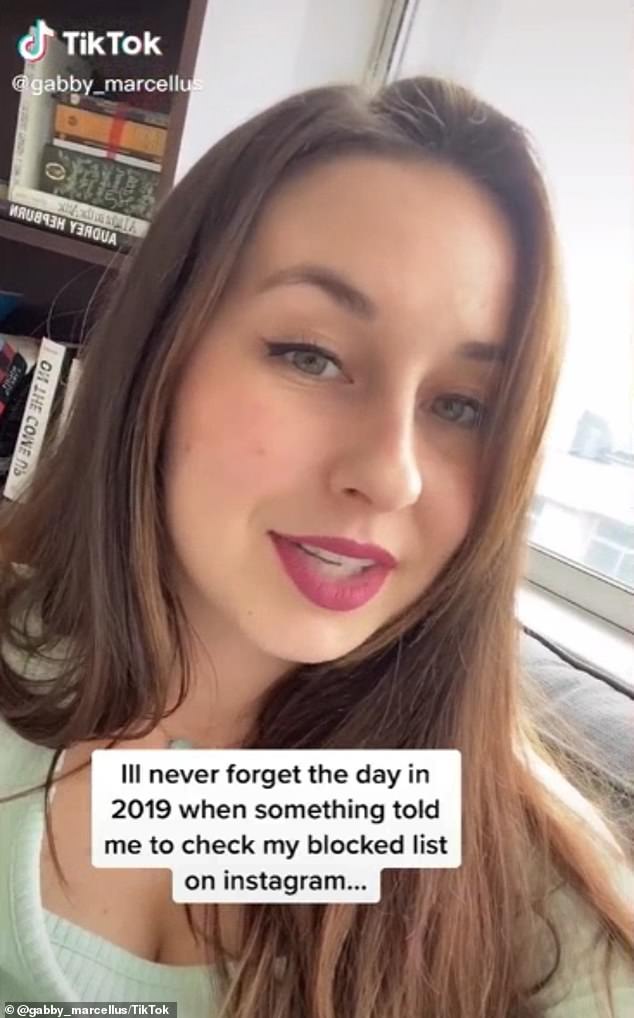 Say what? Gabby Marcellus, 25, from New York, went viral on TikTok after revealing how she  caught her ex-boyfriend ‘cheating’ by checking her ‘blocked list’ on Instagram 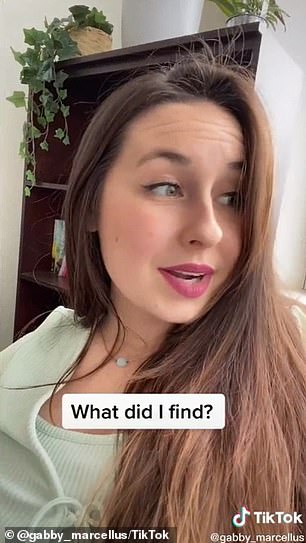 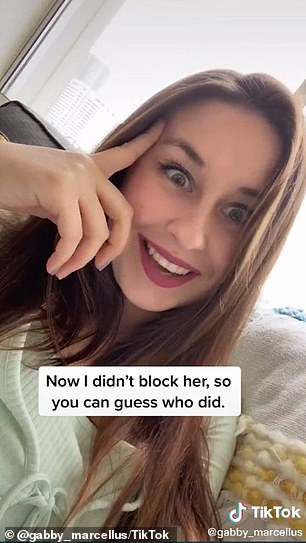 Busted: Gabby said she discovered he had blocked ‘a random girl’ on her account, and after hours of fighting, he admitted to cheating on her

‘They get sneaky my friends,’ she captioned the video, which has been viewed more than 2.1 million times.

Hundreds of people commented on the post, with many asking questions about what happened and how he got her password.

Gabby, who graduated from the University of South Carolina Upstate in 2018, explained in a series of follow-up clips that her British beau had visited her in the US that December, and they spent New Year’s Eve together at a bar.

After making her drinks the entire night, he picked a fight with her, claiming she was too drunk and going to lose her phone. He offered to hold on to it for her and later asked for her password, so he could order them a ride home.

Gabby had noticed that he kept untagging himself in her photos, but when she asked him why, he claimed ‘it was an accident.’

She said she had been visiting him in London for six weeks in 2019 when she found out he was planning ‘secret trips’ with other women. Toward the tail end of her visit, she recalled how her Instagram account was turned to private, which he had denied doing. That made her think to checked her list of blocked followers.

‘I look on my Instagram and I go, “Who’s this?” I can still see it. He goes wide-eyed and he’s like, “She’s crazy,”‘ she said. ‘He starts telling me that she’s just obsessed with him and is trying to break us up, so in order to protect me and protect him, he had to block her.’ 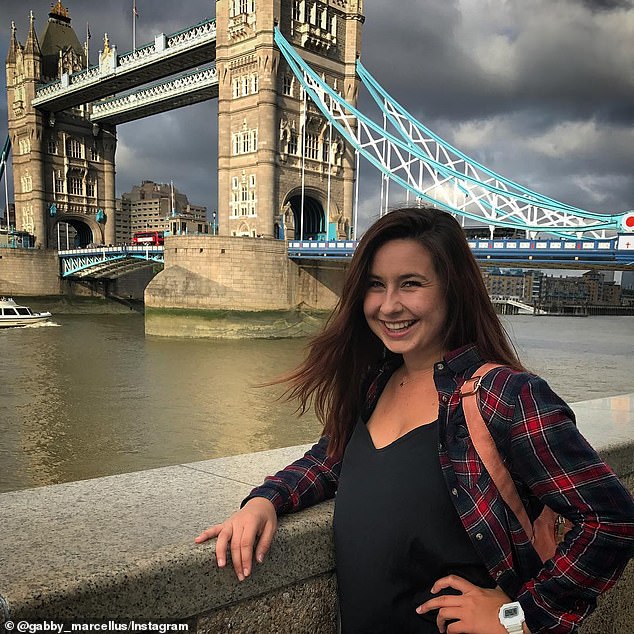 Big mistake: In October 2020, she moved to London to be with him and plan their wedding, spending $10,000 to relocate over seas 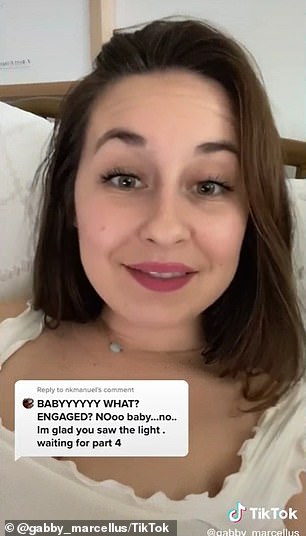 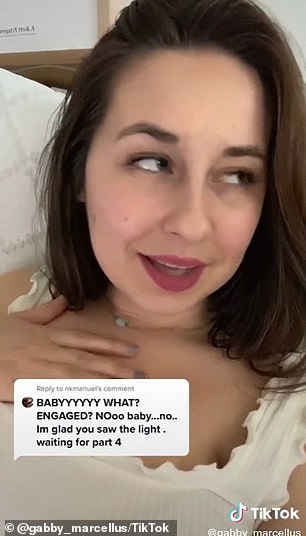 Audacity: Just seven days after she arrived, she found out he was messaging another woman, and they got into another fight

They fought all night long, from 10 p.m. until 2 p.m. the next day, when he finally admitted that he had been cheating on her. She threatened to message the girl, but he convinced her not to, insisting it would make her look ‘crazy.’

Gabby said she couldn’t stay with him anymore, so he called his parents in England and explained the entire situation while sobbing.

‘He had to tell mommy and daddy that he cheated on the girlfriend that they love,’ she shared, saying she took the train to their home in England and spent the night with them as they comforted her.

Gabby returned to London the next day because she and her ex had tickets to go see Hamilton together. She returned to the US a few days later, but they didn’t break up.

‘He was begging for another chance, and a year later we got engaged — and he cheated again,’ she admitted.

Desperate measures: Gabby warned him that if she ever caught him talking to that woman again, she would leave him 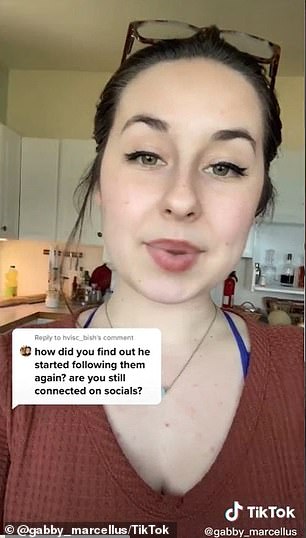 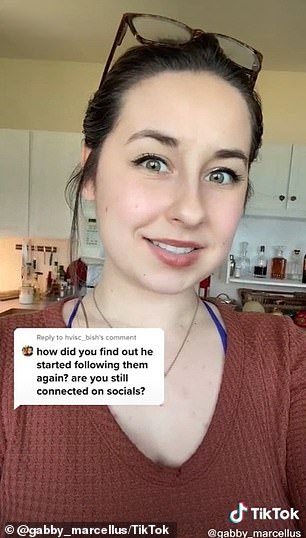 Yikes: Later, when she went through his old cellphone, she learned his conversation with the woman had started three days before she moved and continued after their first argument

After he popped the question in February 2020, she spent $10,000 to move to England to be with him that October, but her time in the UK was short-lived.

‘On Halloween I found out he was messaging another girl behind my back, seven days after I had moved there,’ she said, claiming he ‘flipped out’ when she asked to see his messages because he had cheated on her in the past with the same woman.

He accused her of being ‘controlling’ and ‘manipulative,’ saying she had no right to see his messages and take away his freedom.

Gabby said they continued to fight, and she warned him that if she ever caught him talking to that woman again, she would leave him.

Just a week later, she went through his old cellphone and learned his conversation with the woman had started three days before she moved and continued after their first argument about him messaging her.

According to Gabby, she called off their engagement on November 30 after weeks of trying to get him to stop talking to the other woman. When she found out he was hiding his phone again, she packed up her bags and went to a hotel. 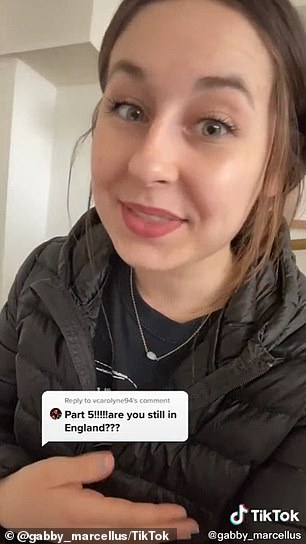 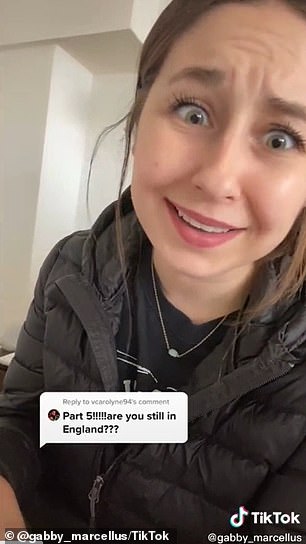 Over: After weeks of fighting, she flew to New York City to stay with her sister, and she never heard from him again 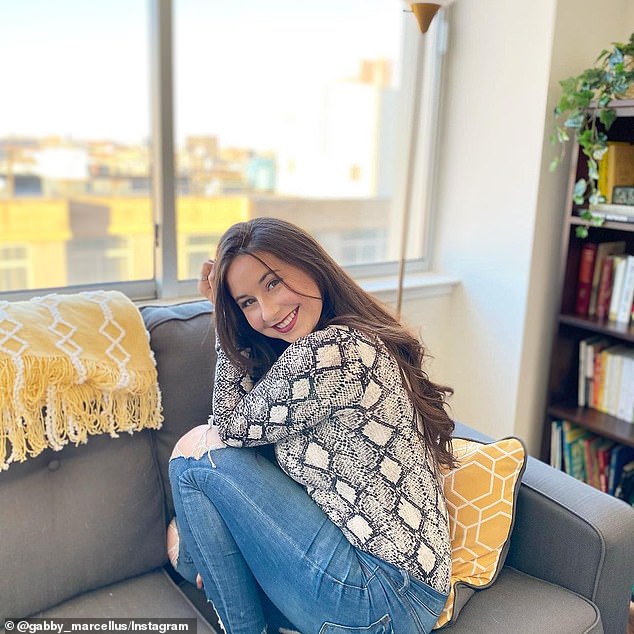 Moving on: Gabby, who still lives in New York, has turned her TikTok to share her story. On Wednesday, she celebrated the seven-month anniversary of her leaving her fiancé

‘He slammed the door behind me, and I never spoke to again,’ she recalled. ‘All the girls he cheated on me with back in 2018, he followed back on Instagram.’

Gabby said she moved to New York City in December and crashed at her sister’s apartment while she figured out her life.

Gabby, who still lives in New York, has turned her TikTok account into ‘a video diary off healing/living after abuse,’ according to her bio. She speaks candidly about her ‘traumatic’ past relationship and how she is working to move on.

On Wednesday, she celebrated the seven-month anniversary of her leaving her fiancé with a video recapping their tumultuous relationship.

‘You are worth the love they are incapable of giving,’ she captioned the post.