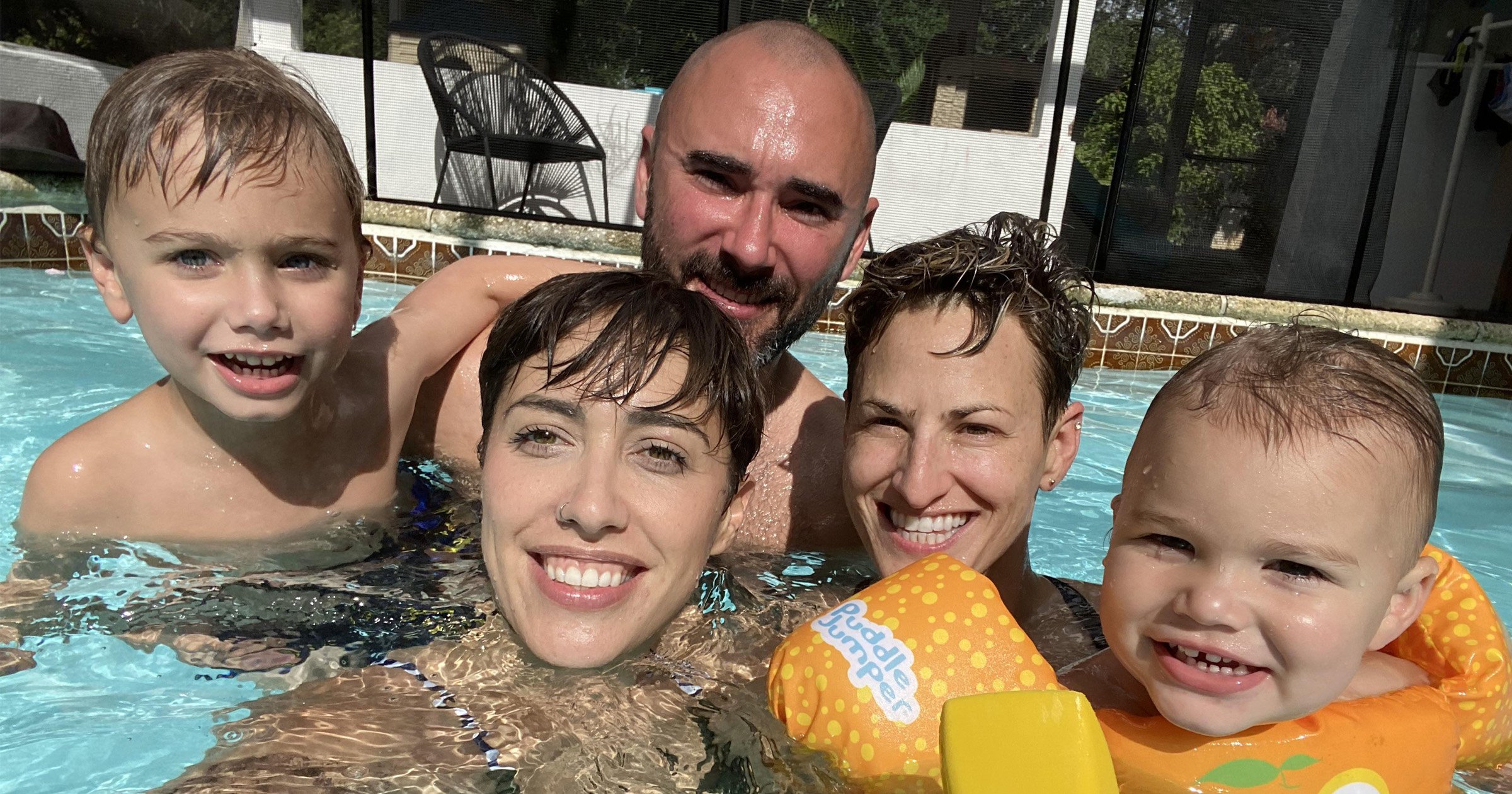 A mum-to-be is delighted to be expecting a baby with her new girlfriend – and the sperm donor is her ex-husband.

Linda Fruits, 33, has such a great relationship with Christopher Haerting, 36, that they decided to stay living together in the family home, alongside their two children, and Linda’s new girlfriend, Mandy Gross, 36.

The trio – who are not in a throuple – even say they’ll all raise the baby together.

Linda and Christopher, from Florida, had been married for eight years, but were struggling with a sexless relationship and how platonic their relationship had become.

Linda said: ‘I couldn’t even bring myself to kiss him anymore and I questioned if we needed to have an open marriage, because I genuinely felt bad for him, he wasn’t getting the things he needed to feel loved.’

She initially thought she may be bisexual and ‘came out’ to Christopher, but it was when she was scrolling through TikTok, that Linda realised she was attracted to a woman and had a ‘sexual awakening’, realising she was a lesbian. The pair split in August 2021.

But rather than go through a bitter separation, Linda and Christopher took the unusual decision to remain a unit for the sake of their sons, and continued to live together.

Christopher said: ‘It was still difficult from time to time, but we talked through our emotions all of the time, and this helped a lot.

‘We both knew that our kids are the most important, and being able to see them every day was more important than dividing our family and making things more complicated on ourselves.

‘Most couples need to get away from each other to move on or because it’s toxic.

‘We found a way to move on while still co-parenting and living together and it’s been great.’

‘They were so young and didn’t seem to care because they still had both parents under one roof.

‘We continue to have little age-appropriate updates, again to give them the context so they don’t come up with the wrong ideas.

Linda then met now-girlfriend Maddy, in November 2021, and the two became inseparable. Their relationship quickly progressed, and Maddy openly shared her desire to have children early on.

Linda said: “After our first date, we were inseparable. We spent as much time as possible together.’

‘On our second date, Maddy told me how she’s always wanted to be a mum and how she was actively trying to find a donor,’ said Linda.

Just six months later, Maddy moved in to the family home with Linda, Christopher and their two sons, Elliot, four, and Owen, two.

‘Christopher was the first to offer to help pack up all her stuff and help get her place ready to rent out,’ says Linda.

Christopher said: ‘It made complete sense for Maddy to move at that point. I was never concerned or felt anything negative towards Linda or Maddy at that time. I was honestly excited.

‘Our kids love Maddy and being in the same house together has been rewarding and fun. We clean together, cook, and eat dinner together, occasionally go out together with and without the kids.’

Linda and Maddy had talked about how ‘crazy’ it would be if Christopher was their donor, meaning all the children could be related – but when they asked him Christopher had to rethink their living arrangement.

‘It was definitely not an instant yes,’ he said. ‘I had a lot of questions for each of them that I needed answered before I felt comfortable with it.

‘My biggest non-negotiable was that I wasn’t comfortable being just a donor. I wanted to be the father/co-parent and legally on the birth certificate.

‘Other than that, I wasn’t – and am not – worried about everything else. We will figure it out. I know that we will all do what’s best for our kids.’

Linda adds: ‘When he said yes, I wasn’t sure who loved Maddy more – me, him, or the kids.’

‘He’s been upfront when he meets women on apps so he doesn’t waste anyone’s time,’ said Linda. ‘It’s really worked out as a great filter system to find someone who is understanding and open minded.’

In November, the family announced they were expecting a baby in May 2023 and say the pregnancy is going ‘great’ and the kids are ‘excited’.

Their arrangement has luckily been smooth sailing with family and friends accepting their choice, and other mums asking Linda for tips.

Linda added: ‘Just because two people weren’t meant to be, doesn’t mean someone is to blame and the kids don’t have to suffer because of it.

‘We must put our egos aside and do what’s best for the children. It’s easier said than done sometimes, but we can’t take it personally.

‘The last conversation we had was about how lucky they are to have so many adults under one roof that love them.

‘We didn’t get to where we are in a day, it took a lot of communication, honesty, and just good old fashion time. Everyone needs a little time for the dust and temporary emotions to settle.

‘Maybe by sharing our story we can change the outcome to be more positive for others. It doesn’t have to be the same old run of the mill toxic separation because this doesn’t benefit anyone, especially the kids.’