A Wiggles documentary will be one of the highlights of Amazon’s Prime Video Australian content line-up in 2023.

Hot Potato will trace the rise of the band-turned-brand from pub rockers and early childhood educators to global phenomenon over a span of more than 30 years. 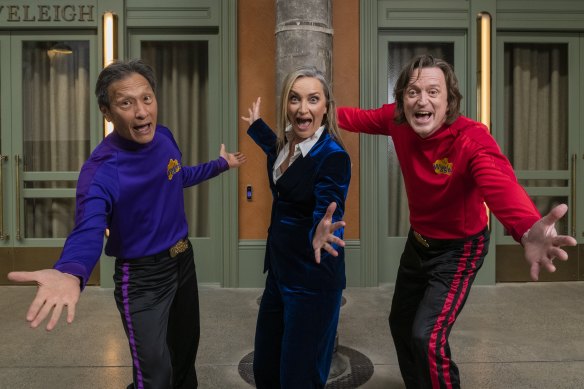 “They are truly a great entertainment export story,” says director Sally Aitken, whose previous work includes David Stratton’s Stories of Australian Cinema, The Pacific: In the Wake of Captain Cook, with Sam Neill, and Playing With Sharks: The Valerie Taylor Story.

“The film has the very deep universal themes of any heroic journey, with an unlikely group in a sea of disbelievers chasing an impossible dream, and getting there. That’s not just an Australian story, it’s what the great films are made of.”

According to Aitken, the four original members – who collectively refer to themselves as the OG Wiggles – “don’t really like talking about their success”. They have, however, expressed hope that the film might prove it wasn’t merely due to blind luck.

“I think the film is an opportunity to say this wasn’t just happenstance and good timing, that they knew what they were doing,” says Aitken.

The Wiggles formed after Greg Page (yellow), Anthony Field (blue) and Murray Cook (red) met while studying early childhood education, and discovered a shared love of music. Jeff Fatt (purple), who played with Field in rockabilly band The Cockroaches, was roped in on keyboards, while Field’s brother Paul – lead singer in The Cockroaches – became The Wiggles’ manager (and played Captain Feathersword).

“They took those early childhood education principles and they applied them diligently, enthusiastically and playfully, and they didn’t lose sight of that, even as the shows got bigger,” Aitken says.

Anthony Field, who is the only original Wiggle still regularly performing with the band, said: “Looking through the archives has brought back so many incredible and emotional memories, from our first shows for 30 children, to touring America and the world, playing to arenas. It’s been such an incredible and evolving journey and we can’t wait to share our story with everyone.”

Hot Potato was one of six new titles announced by Amazon Prime Video in Sydney on Tuesday. Other titles included Dance Life, a documentary series about the Brent Street dance studio in Sydney, which the streamer likens to the Netflix cheerleading series Cheer; a second season of cricket documentary series The Test, set against the backdrop of The Ashes and Pat Cummins’ ascension to the captaincy; The Defenders, about the campaign to save Bahraini soccer player turned political refugee Hakeem al-Araibi from deportation after he was arrested on his honeymoon in Thailand; a documentary about the “resilience” teachings of Hugh van Cuylenburg; and five new stand-up comedy specials, from Dave Hughes, Joel Creasey, Tommy Little, Rhys Nicholson and Lizzy Hoo.

Attendees at the event were also given a first look at three previously announced scripted series: the high-concept thriller Class of ’07; The Lost Flowers of Alice Hart, starring Sigourney Weaver and Fear the Walking Dead’s Alycia Debnam-Carey; and Tasmanian mystery-comedy Deadloch, from Kate McLennan and Kate McCartney.

Speaking to the media on Monday, as he announced that Disney would film a new Planet of the Apes movie in its Moore Park studio complex (formerly Fox Studios), Burke said the government “is looking at how we might lean in on streaming quotas to make sure we’ve got the other policies there to be able to back in Australian stories being told … We’re looking at where Australian content quotas should be with respect to streaming.”

Like fellow streamers Netflix, Stan and Disney, Amazon is opposed to quotas as a means of supporting the production of Australian content.

“We’ve commissioned now 23 Australian originals without quotas, and why we do that is because we found great projects,” says Tyler Bern, head of content for Prime Video Australia New Zealand and Canada.

“We know our customers want to watch Australian content … It’s our belief, and we’ve communicated this publicly, that regulatory intervention at this time is premature.”

The 23 Australian titles commissioned by Amazon Prime Video since 2019 have mostly been stand-up comedy specials and sports documentaries. To date, only one scripted commission – Back To The Rafters, a reboot of Seven’s Packed to the Rafters – has gone to air.

No children’s content has yet been commissioned, though Bern said that was something Amazon was “actively considering”.