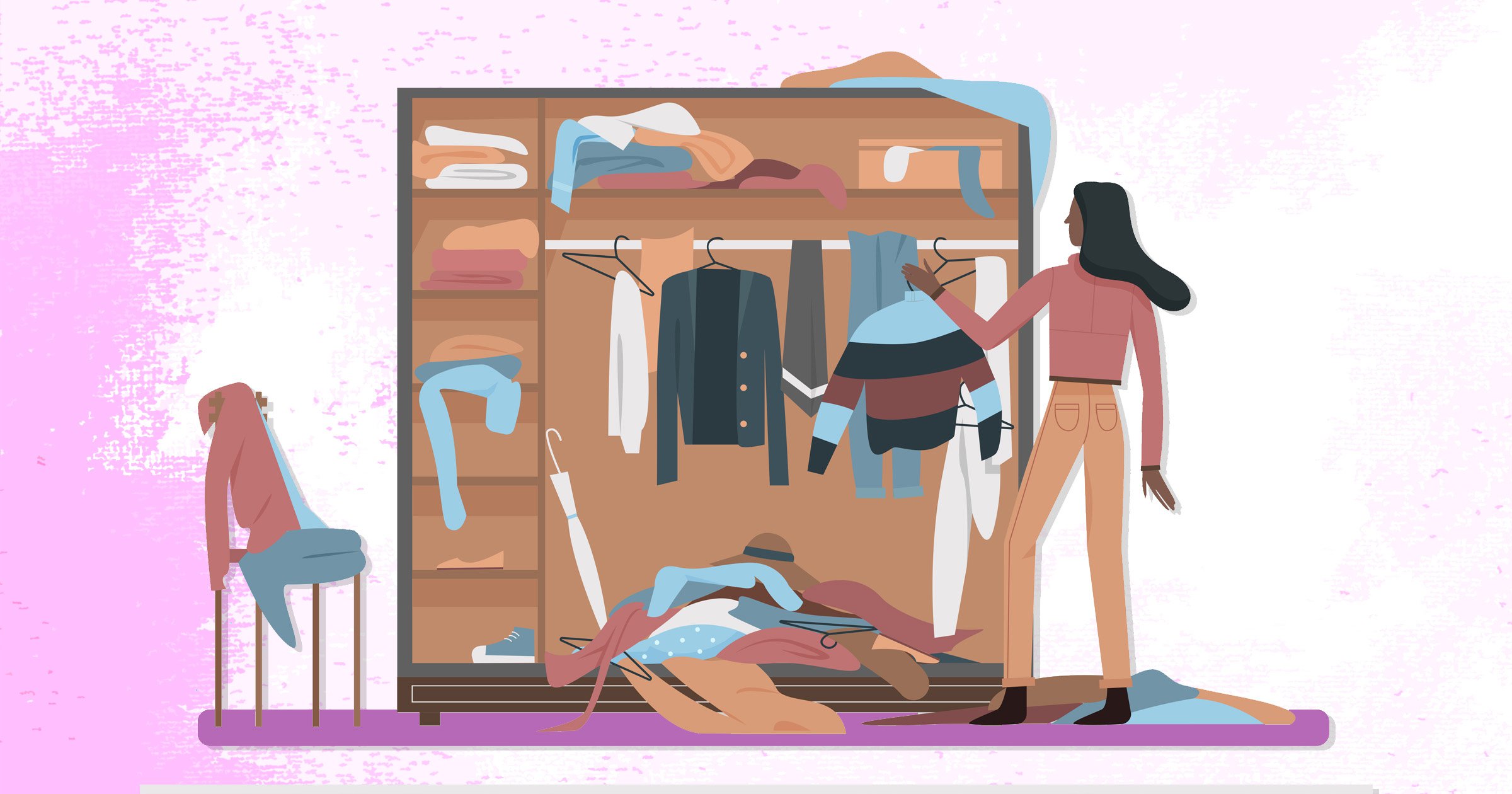 There’s nothing like the thrill of excitement that runs through me when I see a new decluttering video uploaded to YouTube.

Forget Netflix – watching someone tidy up is all I need to unwind in an evening after work.

It seems I’m not alone in this. The comment sections on these videos confirm the widespread passion for this type of content, and after asking on my Instagram story if anyone else had a notable love of decluttering videos, my DMs quickly filled up.

Responses included: ‘I find it quite relaxing – seeing all the mess and chaos get sorted and become orderly and organised. I love it’, ‘sometimes I watch it to procrastinate from doing it myself’, ‘it feels like a meditation to watch someone methodically organise something’, and ‘it gives me a sense of calm’.

Clearly these videos have the power to positively improve our mental wellbeing and offer a sense of release, if only just for a short while.

Marie Kondo was mentioned multiple times in the messages, with people particularly enjoying watching videos that deployed her concept of only keeping things that ‘spark joy’.

If you haven’t seen these videos before, they’re what they say on the tin: footage of a YouTuber or influencer tidying and decluttering part of their home. Beauty and fashion declutter videos, in particular, are easy to find.

Dr Elena Touroni, a consultant psychologist and co-founder of The Chelsea Psychology Clinic, explains this love of watching others declutter as being a route to feeling satisfaction without having to do the work ourselves.

She says: ‘Cleaning and decluttering are mindful activities which can help bring us in touch with the present moment.

‘In a sense, when we watch others declutter, we’re able to put ourselves in their shoes, giving us a similar sense of satisfaction.

‘Our physical space can sometimes be reflective of our mental state. Just as cleaning and tidying can provide us with a sense of control over our environment, living in a cluttered space is likely to do the opposite.’

She notes that decluttering is something we ‘might find ourselves procrastinating over’ to such a point that it begins to feel overwhelming.

Videos of others decluttering can ease those feelings and make us feel inspired to stop putting the inevitable off. Perhaps this is why we enjoy watching someone do something that we struggle to do ourselves.

Dr Eleni advises someone who is struggling to declutter their own things to ‘connect with how they’ll feel when the task is completed and the benefits it will bring’, which include having less stuff to clean, more space, and less to be overwhelmed by.

Decluttering videos can be a way to connect to that feeling. For 29-year-old Julia, who recently moved from a house in London to a flat in New Zealand, watching these videos ‘motivated’ her own actions.

‘The videos make me more anxious about my own clutter, so much so that they give me inspiration to organise my own stuff,’ she tells us. ‘I’m a mad declutterer but for some reason when it comes to makeup, I struggle.

‘I love a before and after [seen in declutter videos]. They show me what potential I have with my own limited space.’

However, for all the inspiring potential these videos have, Dr Ciarán Mc Mahon, author of The Psychology of Social Media, says they can do the opposite, too.

He specialises in cyberpsychology and believes social media ultimately allows us to ‘market a better version of yourself’. What greater opportunity to do just that than making your living environment look impeccable on camera?

He says: ‘[These videos] make decluttering seem a lot easier than it is. Would as many people watch decluttering videos if they were rendered at the actual speed at which they took place?

‘Watching several hours of footage of someone tidying their house seems like even less fun than tidying your own house.

He also thinks there is a particular allure around tidyng videos now that we’re in lockdown and cannot go into other people’s homes physically, so these videos ‘transport us’ there psychologically.

Julia acknowledges the lack of real-time when watching these videos, which is maybe why she’s more inspired than anything else.

To make decluttering approachable, she breaks it down drawer by drawer. At the time of our interview, she was just about to declutter her bathroom sink drawer.

This method is highly rated by Katherine Blackler, president of the Association of Professional Declutterers & Organisers (APDO) and founder of SortMySpace, who says she’s seen Instagram transformations affect the expectations of her clients when they declutter.

She says ‘it’s all been staged and we’re seeing a very chosen, selected window’ of the process of decluttering.

‘There’s something quite satisfying in seeing a transformation in front of your very eyes, especially when it’s on fast-track.’

Katherine describes it as akin to the idea of watching a caterpillar suddenly become a butterfly: ‘there’s something quite magical and appealing about that’.

As a professional organiser, she admits to clients that it’s far easier for her to deal with their stuff than her own due to emotional attachment. In her observations, this is often why people struggle to do the decluttering and why we love watching others do it instead.

‘It is understandable that a lot of people enjoy and get inspired by watching other people do the decluttering because they get to enjoy the result without having to go through the potential pain points that you do when you’re decluttering your own stuff.

‘Some people when they are letting go of stuff do actually feel physical pain.’

This is why she describes decluttering as a ‘journey’ that you need to ‘dedicate a lot of time’ towards.

As Julia did, she advises you start small and acknowledge the real time implications of decluttering, versus a 30-minute video you can watch while drinking a cup of tea.

The reality is, while we’d all love to let go of our attachments, it’s difficult to do and decluttering videos allow us to forget that burden for a moment – as Katherine explains, we don’t need to make any decisions other than to press pause or play.