With his second Grammy nomination for best global music album, the Afrofusion star further proves why he has the whole world listening.

Damini Ebunoluwa Ogulu has been making music for a decade as Burna Boy, the architect of Afro-fusion. How does he describe the genre? “Afro-fusion is exactly what it is,” he says. “It’s self-explanatory. ‘Afro,’ that’s the foundation—with the Afrocentrism, with the Afro drums and the Afro spirit. And the ‘fusion’ is where you fuse everything else with the Afrobeats, from R&B to hip-hop to reggae to dancehall to rock.”

Even on a video call from his hotel room in London, Burna Boy exudes the cool confidence you might expect from one who has been compared to Nigerian music legends Lagbaja and Fela Kuti—the latter of whom was managed by Burna Boy’s maternal grandfather, Benson Idonije. 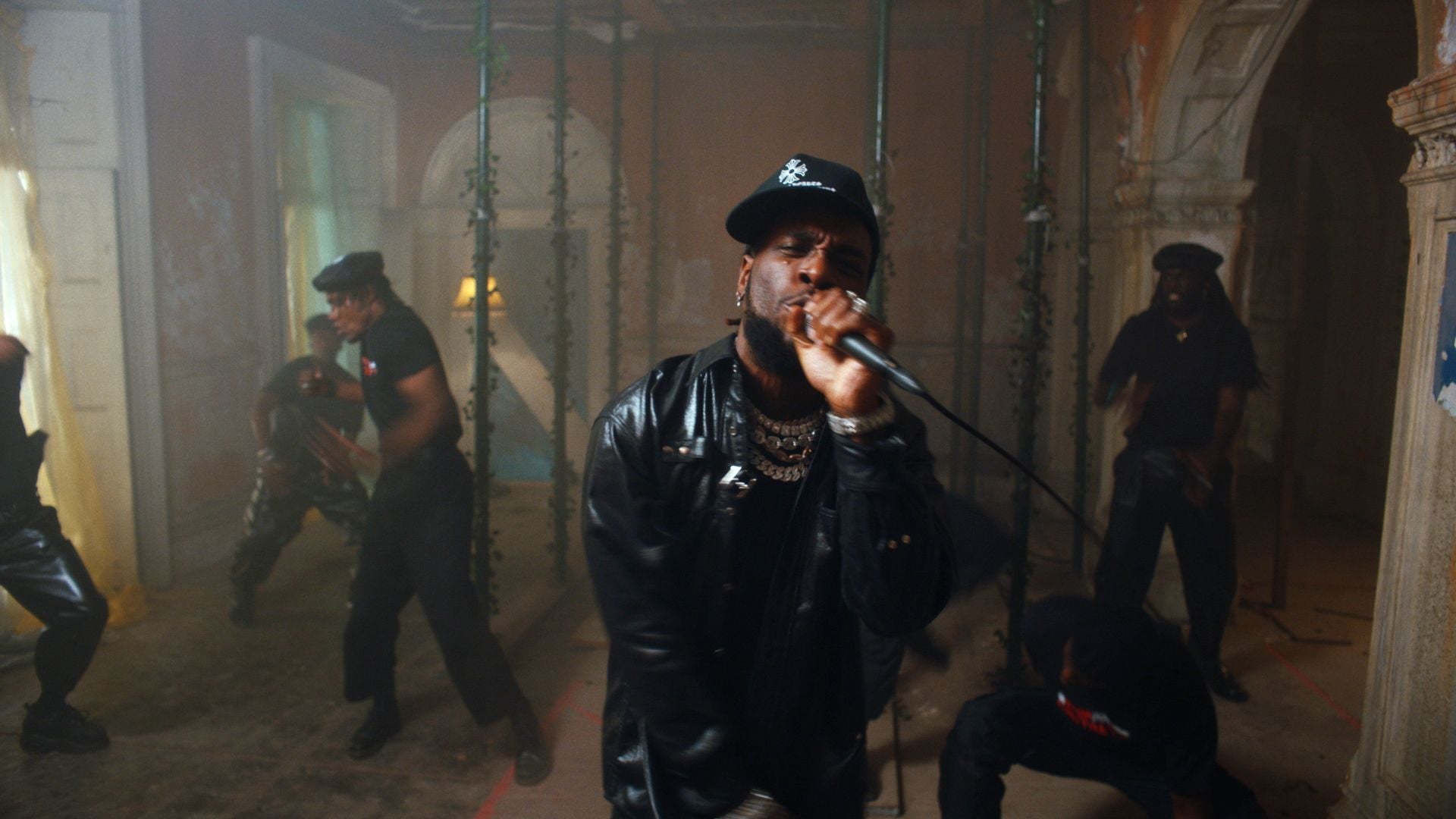 The artist doesn’t mind the comparison. That’s mostly because, in his view, it doesn’t mean much, given the general lack of knowledge about the history of Nigerian music. That includes Nigerians themselves, as well as a global audience that has been enamored with other offerings from the continent.

From Afro-fusion to Afrobeats—not be confused with Kuti’s creation, Afrobeat—the various musical styles delineate contemporary West African pop music, Burna Boy finds himself less willing to keep clarifying it all. “I don’t fight it too much anymore,” he says. “‘Afrobeats’ is just a name that the U.K. gave to have an umbrella for African music. As Fela Kuti is to Afrobeat, so am I to Afro-fusion. So that’s what I try to explain sometimes. But then, it’s like a lot easier to just not.”

Despite the appearance of capitulation to Western interpretations of himself and his music, Burna Boy is very much self-defined. In the early aughts, he got his start writing songs and making mixtapes. His 2012 single, “Like to Party,” featured on his subsequent debut album, L.I.F.E.—Leaving an Impact for Eternity, put him on the map. His prominence would rise with a score of hits, including “Run My Race” (on L.I.F.E) and 2018’s “Rock Your Body,” from his third studio effort, Outside, which demonstrated his versatility and worldwide appeal.

But it was his African Giant LP, released in July 2019, that brought him international stardom. He later earned a 2020 Grammy nomination in the World Music Album category—but lost out to Beninese singer Angélique Kidjo, who is also featured on African Giant. (He has another shot at a Grammy as Twice As Tall is secured a best global music album nomination for the 63rd Grammy’s, which are awarded January 31, 2021.)

‘Afrobeats’ is just a name that the U.K. gave to have an umbrella for African music. As Fela Kuti is to Afrobeat, so am I to Afro-fusion…. I want to bring the world to where I am.

In his latest work, Twice As Tall, which hit the market in August, the star says he’s telling a more personal story. He also worked with many of his music heroes—including Diddy, who co–executive-produced the album, and Naughty by Nature, who influenced him when he was just starting out, and both are featured in a song named after them. In one sense, the offering celebrates Burna Boy’s ten-year anniversary in the industry. Twice As Tall is also a lyrical testament to a love for Pan-Africanism, which was passed down from his mother, Bose, who has expressed this passion in acceptance speeches on his behalf at award shows. “It comes from her father, who passed it to her, who has, in turn, passed it to me,” he explains. “It just goes on. I’ll pass it to my children.” 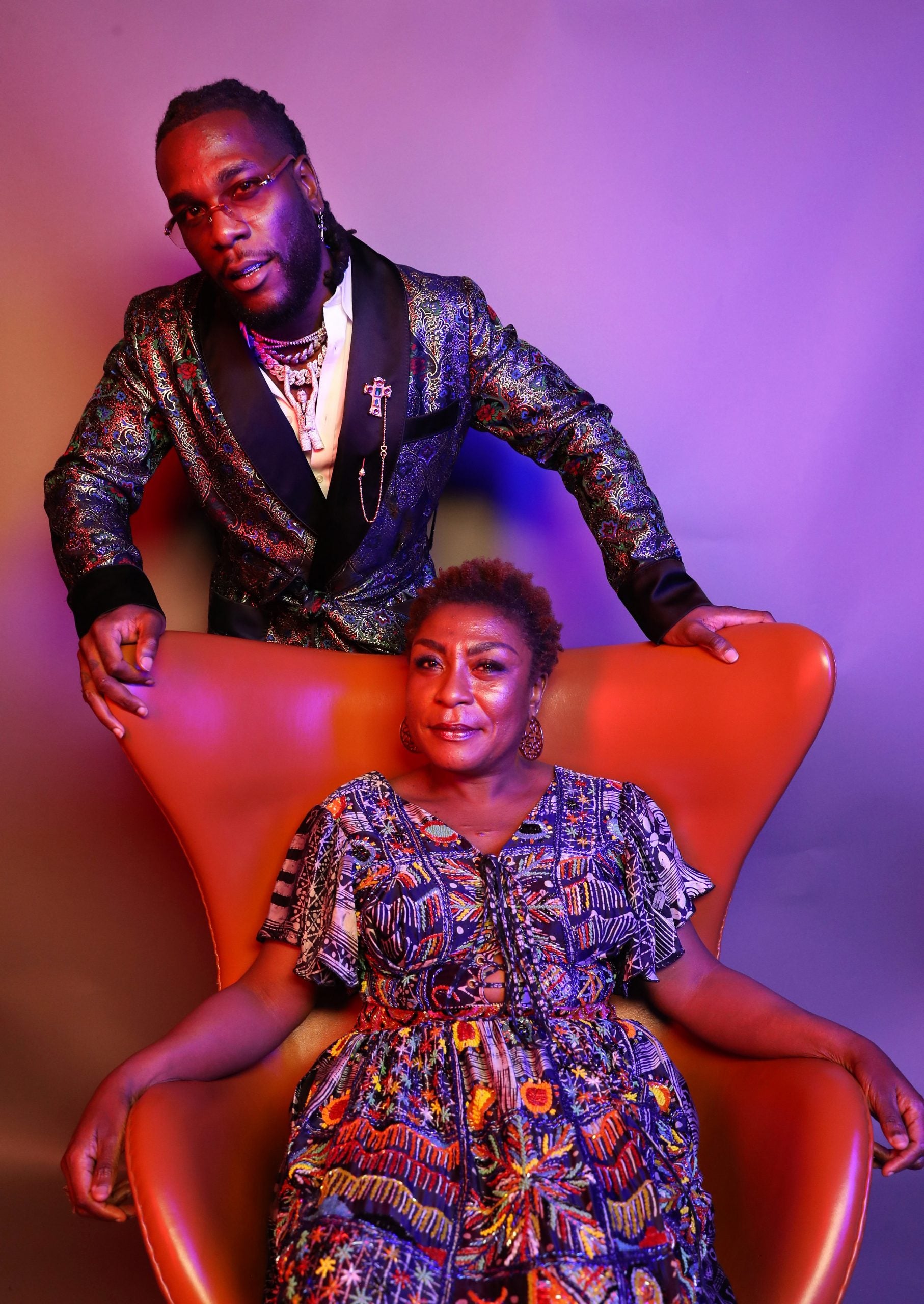 Like his mom, Burna’s sister Nissi also influences his artistry—but she has dominion over his look. On the video call, he’s wearing a white hoodie with black writing, the hood covering his almost shoulder- length locs. It’s a far cry from his public aesthetic of myriad prints and patterns and, of course, jewelry—lots and lots of jewelry, inspired by Nigeria’s and the diaspora’s traditional and modern fashion culture. It’s fitting that his sartorial style reflects his musical style—and what he sees as part of his goal as an African artist: bringing the diaspora together while maintaining a strong sense of self.

“I’m someone who has been exposed to a lot of different cultures, different people and different places—so I’m very free with who I am, and I’m happy,” he says. “I know what I want you to see me as—nothing more than what exactly I am. I want to look like what’s me, and that’s it.”

Kovie Biakolo (@koviebiakolo) is a writer, editor and multiculturalism scholar specializing in culture and identity. Last month, she wrote about Nigeria’s 60th anniversary on essence.com.