Way back in 2004, former professional wrestler and emerging Hollywood star Dwayne “The Rock” Johnson visited Australia to promote the action movie Walking Tall with his mother Ata as part of his entourage.

And when the then 33-year-old grandson of a Samoan high chief swore during an interview with this masthead in a hotel room, he looked across at Ata sitting in the adjoining bedroom and winced comically. “Excuse my language,” he said. “Sorry, mum!” 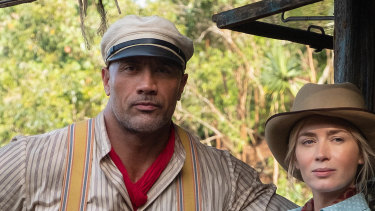 “My original goal was to become a television sitcom actor”: Dwayne Johnson and Emily Blunt in Jungle Cruise.Credit:Disney

It was an unexpectedly gentle moment for the 10-time world wrestling champion who is giant-sized in real life at 196 centimetres tall and almost 120 kilograms.

It was even more unexpected given The Rock was still trying to make it as a tough-guy action star at the time. After breaking into movies in the less than stellar The Mummy Returns in 2001 and The Scorpion King the next year, he played a former Special Forces soldier who violently cleans up his corrupt hometown with a wooden club in Walking Tall. 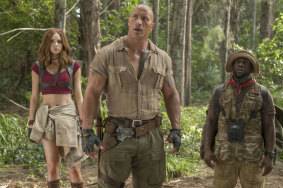 Hollywood’s highest-earning actor for the second consecutive year: Dwayne Johnson with Karen Gillan and Kevin Hart in Jumanji: Welcome To The Jungle. Credit:Sony

It’s hard to imagine many of them apologising for swearing.

After 18 months that have left many of us feeling as though we’ve been knocked around with a wooden club, Johnson is the movie star we need.

Charismatic and easy to like, he has a sunny outlook, obvious pride in his Samoan heritage, hams it up with his kids on social media and has a sense of humour about his image.

At just the right time – with half the country in lockdown – Johnson has a new movie coming out.

Jungle Cruise, an African Queen-style comic adventure that has him as a wisecracking steamboat captain heading down river with an intrepid scientist played by Emily Blunt, opens in cinemas that are not shuttered on Thursday and the streaming service Disney + on Friday. 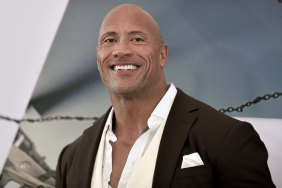 But at this stage of his career, Johnson seems like one of the good guys.

He has his faults – starring in the shocker that was the Baywatch movie for one – but his acting has improved from his clunky early days and, at 49, he manages to look better bald than he ever did with hair.

Johnson has been pushing into comedy as well as action since playing a gay Samoan bodyguard who wore a satin cowboy outfit and wanted to act opposite Nicole Kidman in 2005’s Be Cool.

“My original goal was to become a television sitcom actor – not many people know that – because I love comedy so much,” he said all those years ago. 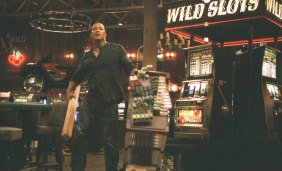 Last year, Johnson topped the annual Forbes list of the world’s highest-earning male actors for the second consecutive time. He earned a breezy $US87.5 million ($119 million) including $US23.5 million for the upcoming Netflix action comedy Red Notice.

And through Seven Bucks Productions, named after how much money he had after being cut from the Calgary Stampeders and losing hope of playing NFL in 1995, he has become a producing machine in Hollywood.

On television, his credits include the comic drama Ballers, which has him playing a retired NFL player turned manager, and the autobiographical sitcom Young Rock, in which he plays himself being interviewed about running for US President.

In movies, he has produced or executive produced the hits Jumanji: Welcome To The Jungle and Jumanji: The Next Level as well as Rampage, Skyscraper, Shazam, Hobbs & Shaw and now Jungle Cruise. Coming up are Red Notice, the superhero movie Black Adam and The King, which will have him playing Hawaiian founder King Kamehameha.

The Rock is just as much a machine for promoting his other commercial interests – tequila, bottled water, ice-cream, energy drink – to his 255 million followers on Instagram. But he also sent a recent video message to a young cancer patient and posted about being depressed as a teenager.

And Johnson has done all this without a public meltdown, drunken rant or toxic opinion.

So let’s enjoy his movies while we can. And take heart that even the world’s biggest movie star has worried about upsetting his mum by swearing.

Dwayne Johnson’s biggest hits in Australian cinemas have been the two Jumanji movies. In the two decades since starring in The Mummy Returns, he has had 14 movies that have topped $10 million at the box office – the benchmark for blockbuster success. Here’s how they rank.

1. Jumanji: Welcome to the Jungle (2017)
A new instalment of the board game-inspired franchise that sent four teenagers on a jungle mission never seemed promising but it worked surprisingly well, with Johnson playing archaeologist Dr Xander “Smolder” Bravestone. Box office: $48.8 million*.

2. Jumanji: The Next Level (2019)
A return to the game had Johnson on shakier ground initially – playing “Smolder” Bravestone as the avatar of a cranky grandfather – on another mission. Box office: $46.7 million.

3. Furious 7 (2015)
The best of the Fast and Furious movies was really about the relationship between the characters played by Vin Diesel and Paul Walker – and the cars – but Johnson continued his role as Diplomatic Security Service agent Luke Hobbs. Box office: $43.4 million.

4. The Fate of the Furious (2017)
The eighth instalment – the last before Johnson went his own way with Hobbs & Shaw after apparently falling out with Diesel – had Hobbs and the team tangling with a cyberterrorist played by Charlize Theron. Box office: $28.5 million.

5. Fast & Furious 6 (2013)
Johnson’s Hobbs gets the team to track down a former special operations soldier who is stealing components to create a deadly device. Box office: $27 million.