The entirety of Palestinian group Hamas has been listed as a terrorist organisation by the federal government as Home Affairs Minister Karen Andrews says the Coalition has no higher priority than national security. 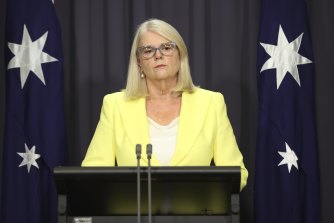 Minister for Home Affairs Karen Andrews said listing a group as a terrorist organisation was a move the government took extremely seriously.Credit:Alex Ellinghausen

“The views of Hamas and the violent extremist groups listed today are deeply disturbed, and there is no place in Australia for such views,” Ms Andrews said on Thursday.

Hamas’ military branch, the al-Din al-Qassam Brigades, has been proscribed as a terrorist organisation by the Australian government since 2003. A bipartisan inquiry by the intelligence and security committee late last year recommended all of Hamas be listed, saying the group’s military wing was intertwined with its political arm.

The government’s decision could have diplomatic ramifications. Hamas is in charge of the self-governing Palestinian territory and Australia has a consular presence in the Gaza Strip.

Ms Andrews said listing a group as a terrorist organisation was a move the government took extremely seriously and it first considered advice from several government agencies.

“I have received information from a number of our agencies in relation to Hamas and I am of the view that the threshold to list as a terrorist organisation has been met,” she said.

When asked how ordinary Palestinians living in Australia would be protected from getting caught up in the expanded Hamas listing, Ms Andrews said the Attorney-General would work on the offences under the Criminal Code.

The federal government has increased its focus on national security ahead of the federal election, likely to be a weekend in May, and has attacked Labor in the last week over its approach to crime and foreign interference.

The Home Affairs Minister said people who actively supported acts of terrorism or a terrorist organisation, people who were members of terrorist groups, those who provided funding for terrorism activities or participated in training could all face criminal charges.

“There is no higher priority for the Morrison government than the protection of Australia,” Ms Andrews said.

Following Ms Andrew’s announcement on Thursday, the Zionist Federation of Australia said it was the right decision and brought Australia into line with the positions of the United Kingdom, Canada, United States and Europe on Hamas.

“The idea that Australia could artificially differentiate between different parts of Hamas never really passed the pub test,” the federation’s director of public affairs, Bren Carlill, said. “This decision rights a wrong, and what’s really important is that it was bipartisan.”

On Thursday, the federal government also re-listed Abu Sayyaf Group, al-Qa’ida, al-Qa’ida in the Lands of the Islamic Maghreb and Jemaah Islamiyah as terrorist organisations.