Some of the most populated parts of Sydney and Melbourne could fall short of key vaccination targets despite rapid rollout of inoculations, potentially leaving hundreds of thousands of people in at-risk communities exposed to COVID-19.

Health experts say it’s crucial to know which areas are falling behind so concerted efforts can be made to increase rates, but also to know where future outbreaks could occur. 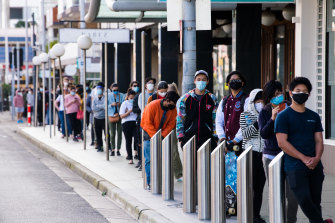 People queuing for vaccines in Brighton-Le-Sands, in Sydney’s south, on Wednesday.Credit:James Brickwood

The federal government has set a target for the nation and all states and territories to fully vaccinate 70 per cent of the eligible population before Australia can move into the “transition” phase of the planned four-phase recovery from the pandemic. The country can move to the third “consolidation” phase with fewer restrictions once those vaccination rates reach 80 per cent.

The target is a jurisdiction-wide average and does not take into account possible differences within a state or territory.

In Victoria, lower vaccination rates in parts of the capital mean a concerted effort is needed to pull the state up to that target, while in NSW, vaccinating the communities in Sydney’s western suburbs will be key to reaching 70 per cent.

“There is no one uniform, safe vaccine coverage level when you start looking at it at this smaller geographic and social level,” he said.

Melbourne’s north-east, north-west and western suburbs are home to more than 27 per cent of Victoria’s 5.4 million residents who are aged 16 or older. Yet, the full vaccination rate for these three areas is just 22 per cent, the lowest rate in the state.

It’s a similar story in Melbourne’s south-east suburbs, which are home to more than 800,000 people.

So many people live in these parts of Melbourne that if one or both fall short, the entire state will struggle to meet the 70 per cent target.

In NSW, almost 31 per cent of the state’s 6.6 million people aged 16 or more live in Sydney’s western suburbs. More than one million alone live in the Parramatta and inner south-west statistical areas.

The city’s south-west and the North Sydney-Hornsby areas are both home to about 430,000 vaccine-eligible people. Across North Sydney, more than 37 per cent of people are already fully vaccinated but across the south-west just 21.9 per cent are double doses.

So important are Sydney’s western suburbs, the state will find it almost impossible to reach its vaccine target without the region hitting the 70 per cent and 80 per cent benchmarks.

Professor McCaw, part of the Doherty team which will produce more detailed modelling in coming weeks, said it was important health authorities were conscious of the differences between regions such as the make-up of those communities.

“National coverage levels must also have a metric that accounts for or answers to how well we’re dealing with inequity in access to vaccination services,” she said.

“If we don’t have that then communities and all of us are going to remain at risk of significant outbreaks.”

The federal government is preparing for differences between when the states and territories reach the 70 per cent target. NSW could hit the 70 per cent mark a month earlier than WA.

But within states, the expectation is that incentives – such as easing of restrictions – could be used to encourage particular parts of a city or region to get vaccinated.

Prime Minister Scott Morrison said it was a “fair assessment” that some regions could be left short of the targets even if the overall state reached those levels.

He said this meant those at-risk communities would have to be targeted in coming weeks and months.

“As we move into those 70 per cent and 80 per cent phases … that where communities in particular remain vulnerable because of lower vaccination rates, then we will have to be more careful in those places,” he said on Tuesday.

“But for the broad majority of the population, the broader vaccination rates will be more prevailing I think in those circumstances.”

Professor McCaw said detailed data also helps experts anticipate where future outbreaks could occur, which then, in turn, minimises harm to the community.

“It’s so that we expect, and we anticipate that there are places where the virus can spread, and that we’re ready to both identify that and then know how to respond,” he said.

“And that’s why we need planning and modelling and data systems in place to be able to detect and respond to it.“