Mosquitoes are spreading a rare tropical disease further south than ever before. What are the signs of Japanese encephalitis and why is it here?

Cases of a rare tropical virus have been discovered across Australia’s east coast – the first time the mosquito-borne Japanese encephalitis has spread below the country’s northern tip.

The virus is rarely fatal but a number of people have been hospitalised, at least two of them in intensive care, since authorities discovered it had been spreading undetected for weeks in piggeries across Australia’s southeast.

The federal health department has declared the outbreak an incident of national significance and has warned people to guard against mosquitoes as floodwaters and unusually humid conditions attract more of the insect down south. “We’re not going to see thousands of cases, this is not another pandemic,” says infectious disease physician Associate Professor Paul Griffin. “But we need to be on our guard. We’re seeing more of these tropical diseases flare up [in Australia] because of climate change.” 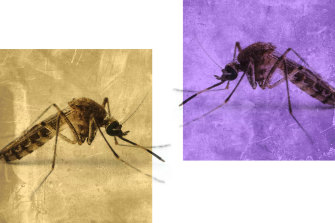 What is Japanese encephalitis and how does it spread?

Known as JEV for short, the Japanese encephalitis virus is a mosquito-borne disease related to dengue and yellow fever. While waterbirds are its natural host, it mostly infects pigs and horses – but it can spread to people too.

Named for its first outbreak in Japan in 1871, JEV can be transmitted only from mosquito to human – not between people or animals directly nor by eating pork. Pigs are now being monitored closely as an early warning for the virus and because they can act as “amplifying hosts”, Griffin says. That means they tend to get a lot of it in their blood if infected, which, in turn, can infect the mosquitoes feeding on them and so increase those spreading it in an area. Humans and horses, meanwhile, are what’s known as “dead-end hosts”. “They don’t get enough in their blood for mosquitoes to pass on an infectious dose,” he says.

While the virus can crop up in warmer climates such as parts of Asia and India, depending on rainfall, “we don’t expect to see it in Australia”, Griffin says. Until now, it had been detected only in Australia’s northern tropics such as Cape York.

A federal government spokesman said the virus was first picked up in Australia when piglets became sick in piggeries and, as of March 8, had been reported in 21 farms across New South Wales, Victoria, Queensland and South Australia.

Why is it spreading in Australia?

Scientists say the virus’s life cycle is “complicated”, dependent not just on the particular kind of mosquito carrying JEV (Culex annulirostris) but on the migratory waterbirds on which it feeds. “We don’t truly understand how it’s made it to our shores to this degree but, without question, the [La Niña event] and the recent rainfall, what that’s done to mosquitoes is likely to have played a significant part,” Griffin says. “Potentially, something also has changed how the birds that carry this virus may have moved around to deliver it to more parts of the country.”

That theory is now being rigorously studied to determine exactly how the virus got so far south undetected, according to viral immunologist Dr Ali Zaid at Griffith University. But as habitat for mosquitoes expands in a warmer, wetter world, “we would expect the area of the virus to expand as well”. “What was considered tropical 20 years ago might be very different to today and in 20 years time,” he says.

That means in Australia, which has already warned 1.5 degrees since the Industrial Revolution, places that have never had to worry about tropical viruses before could now see seasonal outbreaks, adds Professor Greg Devine, head of the Mosquito Control Laboratory at QIMR Berghofer. But he says that as temperatures drop in the coming months it will likely become more difficult for JEV to “incubate and circulate” in the southern states. Of course, “if we continue to get warmer and wetter summers then these diseases will become more common”.

On Monday, Agriculture Minister David Littleproud said climate change and extreme weather had played a clear role in the virus’s spread. “The fact that it has effectively spread right across the eastern seaboard into South Australia says that this is a real threat that we need to take seriously,” he said. A working group has been convened to co-ordinate state and federal authorities, including “a national surveillance plan [to find] infected mosquitoes, birds, pigs, horses and humans” and efforts to “reduce mosquito numbers and prevent the infection of pigs, horses and humans”.

What happens if you catch the virus?

Most people who get the virus won’t know they have it – about 99 per cent of cases don’t have symptoms. But of those who do get sick, the fatality rate can be up to 30 per cent. Globally, it kills about 17,000 people a year.

Symptoms can vary from milder, Griffin says, such as fevers, headaches or nausea to the more serious encephalitis, which is swelling of the brain. That can cause a severe headache, vomiting, stiffness of the neck, confusion, seizures, sensitivity to light and paralysis.

“Most people will recover,” he says, although about a third of people with severe symptoms will have ongoing neurological damage.

Known cases so far include a Queensland woman in a critical condition who caught the disease on a campervan trip; and two New South Wales residents on the border with Victoria – a man in intensive care and a child since discharged from the ICU but remaining in a serious condition in hospital

While there is no specific treatment for the virus, there are two vaccines available. The federal government says these will be given to high-risk groups and areas (“like people working in those piggeries,” says Griffin, “but not everyone needs to be vaccinated”). Doctors have been put on alert to test for the virus if symptoms emerge, particularly in mystery cases of encephalitis.

There are some concerns flood waters may attract more mosquitoes (“It’s really bad timing,” Griffin says) as well as stir up other diseases. “We have good surveillance here in Australia and, like we’ve tailored our response with COVID … it will now look not only at the pigs but if human cases cluster in a certain demographic or location, then we might use our vaccine to address those as well.”

How can we avoid it?

Griffin says that, just as we put up physical barriers to stop the coronavirus spreading, wearing long sleeves and pants can “act like masks” – in this case, to protect against mosquito bites. Spraying a strong insect repellant (at least 20 per cent DEET, Griffin says) and avoiding outdoor activities during peak biting times (dawn and dusk) are also crucial. Open tents or windows without screens can let in mosquitoes and bodies of water near homes can attract them.

People who suspect their animal may be infected with the virus should report it. But horses, in particular, do not usually become very unwell.

Some viruses are restricted by the mosquito that carries them, says Zaid. “We don’t know if that is going to change, if they will be able to be carried by different mosquitoes if they are exposed to it.” But as more of the world becomes prime mosquito habitat, he says we need to step up surveillance programs, “finding out which mosquitoes are coming in, and what viruses they’re likely to carry”.

Devine believes the risk posed by other mosquito-borne illnesses creeping south is even greater than JEV, especially Dengue fever. Dengue has been all but eradicated in Australia in recent years, thanks to measures targeting the mosquito which carries it (Aedes aegypti). That bug feeds exclusively on humans and can also spread yellow fever, chikungunya (a viral disease first described in Tanzania in 1952) and Zika (named after the Zika Forest in Uganda in 1947).

But Devine says global warming means Aedes aegypti could find a home here again. “Brisbane, in particular, is becoming far more habitable for Aedes aegypti – by 2032, when the Olympics arrive, we could well be in a position where it has become entrenched,” he says.

Another mosquito from the Torres Strait – Aedes albopictus, the Asian Tiger mosquito – could also start to spread here, and we do not have controls to stop it. “If that comes down – and, honestly, there’s no reason it couldn’t be here already – then it would be a good vector for Dengue. If people bring Dengue back into the country, it could start spreading quite easily.”