Have you had your Weetabix – with beans? Cereal’s unlikely collaboration with Heinz prompts a Twitter pile-on with everyone from the NHS to Which? advising against the ‘monstrosity’

British cereal company Weetabix raised eyebrows on Twitter after it suggested fans should try to eat their baked beans from Heinz on their cereal, and even shared a picture of the bizarre dish by way of encouragement.

The stunt did not seem to inspire any takers, but it certainly achieved its aim of attracting attention with everyone from Which? to the official Twitter account of the NHS rushing to express disapproval. 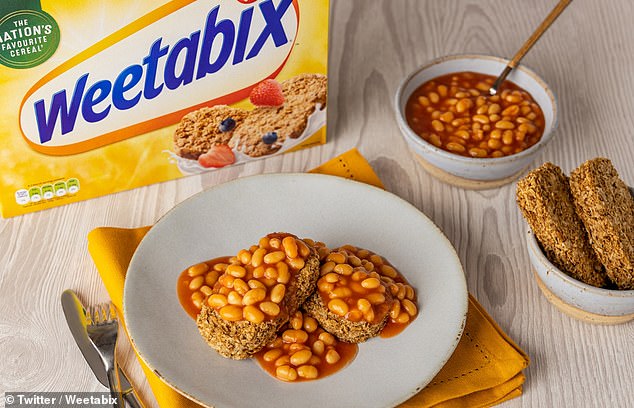 Claiming bread had ‘all the fun’ Weetabix invited people to try ‘beans on bix; for breakfast. The idea did not convinced many

‘Why should bread have all the fun, when there’s Weetabix? Serving up @Heinz Beanz on bix for breakfast with a twist,’ the Weetabix account posted this morning, along with ‘#ithastobeheinz’ and ‘#haveyouhadyourweetabix.’

The stunt did not convince fans of the brand, and many started to put down the strange combination.

‘This is the worst food I have ever seen with my eyes,’ one said.

Other brands Twirtter account, including BirdsEye, jumped into on the action and took a swing at Weetabix online

‘People use the phrase “that’s nasty” too often these days but I truly mean it when I say that’s the biggest f****** monstrosity I’ve ever seen,’ another said.

‘Don’t embarrass me like this in front of the Americans,’ said another.

‘OMG! I’ve eaten some strange combos, (melted Nutella on Weetabix is my guilty pleasure), but I can’t imagine braving this one,’ said another.

Even Sex Education actor Asa Butterfield chipped in, simply writing: ‘Get out’ to show his disapprobation.

But the biggest blow came when other brands community managers – who are hired to look after their social media presence on social platforms – decided to get in on the action and relentlessly mocked Weetabix. 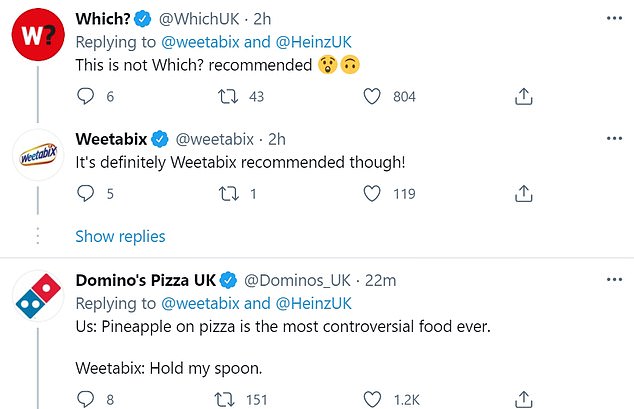 Domino’s pizza, Specsavers, KFC and even Which? made fun of the Weetabix initiative on social media

Glasses and lenses brand Specsavers said “*remove glasses* *puts on blindfold*,’ to show they didn’t even want to look at the Weetabix and Heinz mix.

Smoothie and juice makers Innocent also sent a jab, writing:  ‘Even we wouldn’t do this. We’re not monsters.’

Fast food chains also piled on, with KFC UK and Ireland’s account tweeting:  ‘Alexa how do I delete someone else’s tweet?’

‘That doesn’t fly with us,’ simply said Virgin Atlantic.

Meanwhile, Domino’s went with:  ‘Us: Pineapple on pizza is the most controversial food ever. Weetabix: Hold my spoon.’

The NHS and Citizens Advice also got involved, while Weetabix took the jokes and criticisms in its stride

But brands were not the only ones to take a hit at Weetabix this morning, other official organisation took  a swng at the ‘beans on bix’ idea.

Citzen advice wrote: ‘We can’t advise anyone to try this,’ while even the NHS quipped: ‘That tweet should come with a health warning.’

The Weetabix account to the jokes in its stride, replying back to almost all the criticism with upbeat messages.

‘Sometimes the people we like don’t like us back, and there’s nothing you can do about it. No hard feelings,’ they wrote.

It is unknown why the brands decided to introduce the ‘beans on bix’ idea today, but some joked they were too early for April’s Fools, which traditionally happens on April 1.

‘Well, the combination of two of the country’s most loved breakfast foods has certainly bean causing quite a stir on social media!

‘And who are we to judge how people serve their Beanz? But if you ask us, Heinz Beanz on Weetabix is a winner for a protein-filled start to the day. Don’t knock it until you’ve tried it!

‘We strongly believe that our Beanz taste great with everything, whether this be Weetabix, on toast, or with your roast dinner, we believe Beanz are a delicious addition to any meal,’ he added.