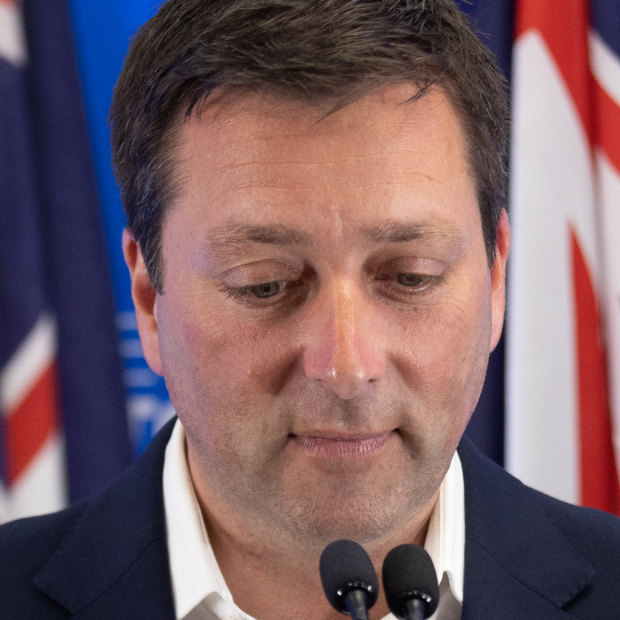 It was the moment the Liberals realised they had chosen the wrong Guy.

In August this year, not long after the salary imbroglio surrounding Matthew Guy’s chief of staff first lobbed into the middle of Victoria’s election campaign, Liberal Party state director Sam McQuestin approached the opposition leader with a dire set of numbers.

The survey figures, taken from the Liberal Party’s latest internal tracking at a time when Guy’s popularity had cratered following revelations he knew about Mitch Catlin’s attempt to top up his taxpayer salary with money from a party donor, showed the Coalition was headed for a Western Australia-style wipeout.

Nineteen of the party’s 27 seats were at risk of falling. The Coalition’s primary vote had slipped into the 20s – the death zone for any major party.

“We insult people’s intelligence. We think we know what the experiences of others are, not having spoken to them, not having lived among them.”

Internal polling, combined with what the Liberal campaign was picking up from focus groups, made it clear that the doubts raised by the Catlin scandal about Guy’s integrity had reminded voters of all the misgivings they previously held about the recycled opposition leader.

A discussion between McQuestin and Guy about what this meant inevitably led to the topic of Guy’s leadership and whether the Liberals needed a different voice. With the election only months away, any change needed to happen immediately.

Guy outright rejected any handover. Having convinced himself that the Catlin controversy, given no money changed hands, was much ado about nothing, he declared he wouldn’t stand aside. “I’m staying,” he said flatly.

That decision would come back to haunt the Liberals in the dying days of the campaign.

McQuestin was not necessarily pushing for a leadership change, but others in the party, including a group of MPs and some influential figures outside the party room, were taking matters into their own hands. They started sounding out support for Georgie Crozier, the opposition’s health spokeswoman, to take the leadership. 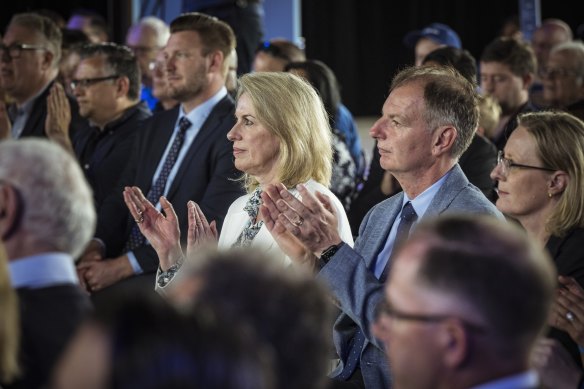 Given health was likely to be a dominant issue in the campaign, who better to make the case than a former nurse whose attack lines were resonating with voters, they reasoned.

The problem was, the plan depended on two things: Crozier wanting the job and vacating her spot in the upper house Legislative Council to contest a lower house seat. Crozier professed no great desire to be leader and said the only district she would consider representing is Malvern, where she lives.

That seat is held by Michael O’Brien, one of the few Liberals who significantly increased his margin on Saturday night. No one was game enough to suggest to O’Brien, whose previous leadership was systematically destabilised from political rivals inside the party, that he should now give up his seat as well.

The Crozier plot was abandoned before it had thickened.

The internal machinations and polling numbers suggest that, as bad as Saturday’s election outcome for the Coalition was, it could have been far worse. Yet within the Liberal Party, recriminations are already flowing between MPs, members of the campaign staff, those responsible for the polling which informed the campaign and the party secretariat.

This election again exposed the gulf that separates Victorian Labor’s ruthlessly professional campaign machine and the enthusiastic amateurs who work for the Liberal cause.

“We need young people, we need change. We had people representing us … who are all of the past. I’m of the past. Get rid of us!”

Liberal MPs, speaking on the condition of anonymity, laid bare the organisational and political malaise which, by the end of the next parliament, will culminate in the Coalition parties spending 23 of 27 years on the opposition benches.

“We insult people’s intelligence,” said one. “We think we know what the experiences of others are, not having spoken to them, not having lived among them and engaged with them. From the lofty heights of 257 Collins Street, we know what it is like to live in Sydenham and Tarneit and Werribee.

“For all its shortcomings, Labor has just won its third election with a resounding majority. Something has got to change. We can’t leave it to a remote garrison of the party to choose a candidate who is going to sully the brand. That stuff has to stop.”

Said another: “It was a campaign targeting Liberal Party supporters who don’t like Daniel Andrews rather than swinging voters who need to be convinced to vote for us.”

Another MP said: “Our brand is so damaged at a federal and state level. We cannot win an election unless we do a full Tony Blair New Labour rebrand.” 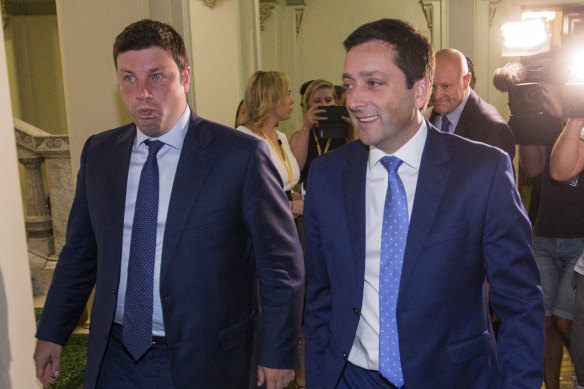 Former MP Tim Smith, having quit politics at this election after a drunken car crash, said Saturday’s loss was on one measure, even worse than the 2018 “Danslide” defeat. Four years ago, Labor was assisted by a visceral protest vote against the federal Liberal Party’s dumping of Malcolm Turnbull as prime minister.

Smith’s judgements are likely to burn the ears of Guy, his one-time friend, who announced on Sunday he would relinquish the party leadership he took back – at the urging of Smith and others – a little over a year ago.

At the Liberal Party’s Collins Street headquarters on election night, Guy and a group of campaign operatives were watching the Sky News election panel when Smith was asked what the result meant for his former colleague. Whatever Smith had to say, Guy wasn’t in the mood to hear it. “Turn that off,” he snapped.

Former premier Jeff Kennett said the party needed to clear its head before Christmas and start next year with a resolve to reform. 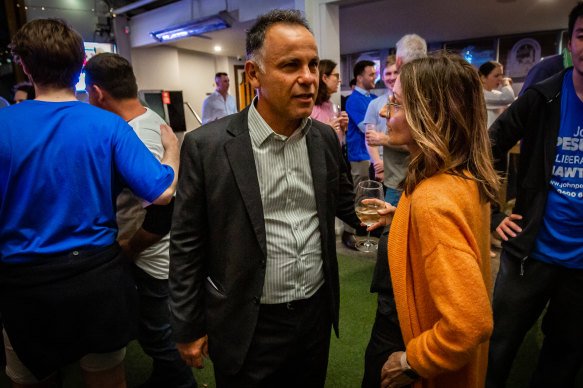 John Pesutto has his nose in front of teal challenger Melissa Lowe in the seat of Hawthorn.Credit:Scott McNaughton

Kennett said a third element which might revive the Liberals’ purpose is the likelihood that during the next term of government, Victorians are likely to face challenging economic circumstances that will return the political focus to proper fiscal management.

He said the brightest results for the party were the likely return of John Pesutto in Hawthorn – a seat the Liberals didn’t think they would win back – and the election of Jess Wilson in Smith’s former seat of Kew. In both seats, they beat teal candidates and a stacked deck of preferences and were on track to regain electorates traditionally held by progressive Liberals.

“That is, in one sense, the future of the Liberal Party,” Kennett said. “For people who say we don’t select the right candidates, Jess Wilson and John Pesutto are examples of where we do.”

Another former Liberal premier, Ted Baillieu, called for immediate action to force generational renewal. “We need young people, we need change,” he told Nine News on Sunday. “We’ve got upper house members who could resign this week and be replaced. We had people representing us on the television last night who are all of the past. I’m of the past. Get rid of us!”

If Pesutto keeps his lead in a Hawthorn, a seat which remains too close to call, his return to the Liberal Party room will provide an immediate litmus test of the party’s willingness to change. Pesutto would almost certainly nominate for the leadership, but he is more popular with voters than he is with his Liberal colleagues.

Will the party choose the leader it most likes, or the most likely to appeal to voters? One party elder said it shouldn’t even be a question. “John has to be the next leader.” 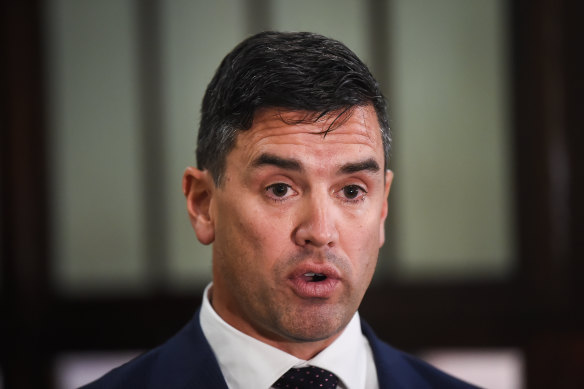 Brad Battin resigned from his shadow portfolios after his tilt at the leadership failed in 2021.Credit:Justin McManus

Other potential leadership candidates, such as Brad Battin, may need convincing. Having unsuccessfully challenged for the leadership in March last year, he subsequently supported Guy’s return and on Sunday did not resile from his decision.

“At the time, Matthew was the right choice,” he told ABC Radio. He also questioned whether the Liberal campaign, which was based almost entirely on milking anti-Andrews sentiment, simply did not offer enough for voters seeking ideas for the future.

One campaign operative said that if the Coalition ever had a path to victory, it was blocked from the outset by the absence of campaign infrastructure and understanding of local issues which the party should have seriously targeted. Instead, the campaign offered little more than a name on a ballot paper and some generic ads.

Some seats in Melbourne’s west and north recorded large swings against Labor but remain in government hands. An MP rejected the notion that a statewide swing against Labor should be considered a victory of sorts. “It is pretty simple,” he said. “If you win seats it is a good campaign, if you don’t it’s a bad campaign. By definition, this was a bad campaign.”

The Coalition campaign was also hindered by the party’s ideological barnacles. The pre-selection of Renee Heath for one of the party’s few secure spots in the upper house might have appealed to religious fundamentalists, but repelled voters who support gay rights and access to abortion. In seats like Bayswater, the selection of poor candidates was duly punished by local voters. “We’ve had years of Sky News and the Herald Sun people telling us we need to move to the right,” an MP said. “But the people who won were sensible and middle of the road.”

Overlaying all these problems was the choice of Liberal leader. The irony of the Coalition’s campaign focus on Andrews’ perceived unpopularity is that their own polling told them consistently that Guy was significantly less popular. Victorian Liberal president Greg Mirabella, having spent most of is working life in marketing, confided in party colleagues shortly after stepping into the role in September that Guy was an impossible sell to the electorate. 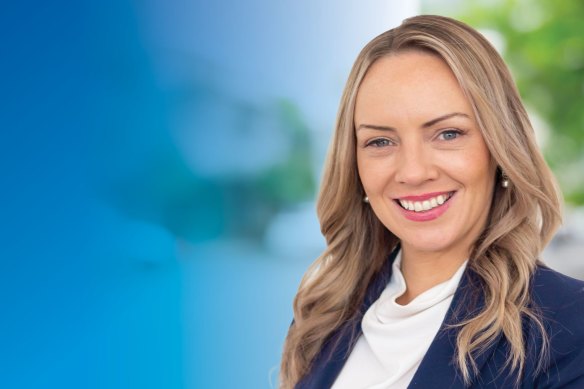 Renee Heath, the Liberal candidate for the upper house seat of Eastern Victoria.

Despite these shortcomings, the Coalition throughout October and most of November dragged itself into a position where, had things gone well in the final week of the campaign, Labor was genuinely nervous about what voters had in store. Instead, the last 10 days of campaigning served only to convince undecided voters that, whatever the problems with Labor, the Liberals were not the answer. A party strategist said three late interventions killed the Liberal campaign.

These were The Age’s revelations about Heath’s ongoing links to an ultra-conservative church which supports gay conversion therapy; TV footage of shadow treasurer David Davis’s inability to cite the total cost of the Coalition’s electoral promises; and a decision made public by the Victorian Electoral Commission to refer to Catlin affair to IBAC.

“It all percolated,” the strategist said. “People just thought, ‘Nup, they are not up to it’.”

Every election loss invites an internal party review but for the Liberals, an especially long, hot summer of introspection beckons. Already influential figures within are discussing fundamental changes to how candidates are selected and even how parliamentary leaders are chosen.

The alternative, if the Liberals opt for more of the same, is to remain a party no longer seen as a viable government.