Vivian Cherry, a photographer whose gritty black-and-white images of street scenes recall a bygone era in New York City, died on March 4 in Albuquerque. She was 98.

Her son and only immediate survivor, Steven Schmidt, confirmed her death. She had been living in Manhattan until late last year. 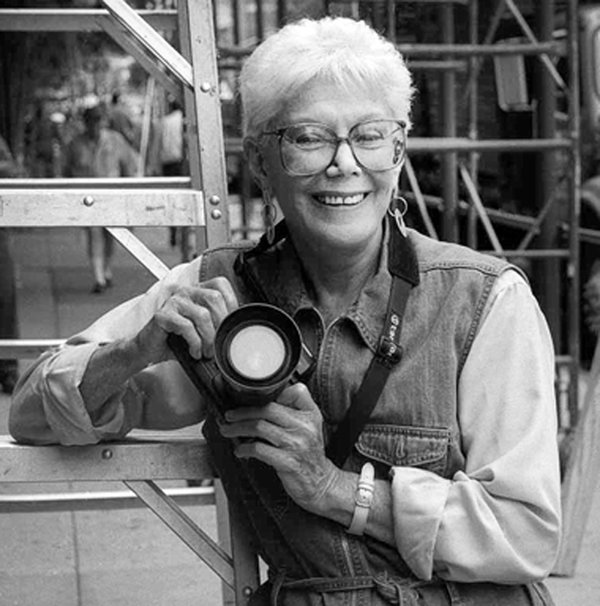 Ms. Cherry in an undated photo. “So much was going on in the world,” she said of her decision to make photography her career, “and I wanted to be a part of it.”

Her work in the 1940s and ’50s — which appeared in Life, Collier’s, Redbook, Popular Photography and other magazines and is in the collections of the Museum of Modern Art and the New York Public Library — documented ordinary people, almost always in candid situations.

“As soon as people see a camera, they change, and what you see you lose,” she said in an interview with Bob Edwards on SiriusXM Satellite Radio in 2008. “You have to be very fast, you have to look at their expressions and their backgrounds and your exposure. They all have to come together instantly.”

While taking a series of photographs of children in 1947, Ms. Cherry spotted some boys in a vacant lot in East Harlem. Unlike the youngsters she had seen shooting toy guns, these boys were playacting a lynching. The boys, both black and white, played their roles regardless of race.

“There were no lynchings in New York” at that time, “but there they are, playing that game, and it didn’t matter if they were black or white,” she said during a talk in 2011 at B & H Photo in Manhattan.

In one of the photographs taken that day, a black youngster in a pea coat stands against a wall filled with graffiti, his eyes closed and his head tilted to the left. A vertical line of white paint or chalk disappears behind his head, as if it were a length of rope.

Ms. Cherry explored the Third Avenue El twice, once in the early 1950s and again in 1955 as iron workers demolished it.

Her first series of El photographs reflected a lost era in New York City, when people traveled the trains in suits and ties, dresses and hats, and could peer inside people’s apartments as they rumbled by.

In one picture, which has the look of a surveillance photo, Ms. Cherry shot from an elevated rail station into the window of a dentist’s office, where a man, his mouth open, was being treated

When the El was torn down, Ms. Cherry got a close-up view and produced a series of shots, including one of a demolition man, with a cigarette jammed between his lips and wearing no hard hat, directing the downward path of a pair of steel beams. She also showed people raptly observing the demolition from street corners as if they were at a stage show.

“Those picture are stunning for their location and the graphic starkness of the demolition and ironwork.” Julia Van Haaften, a former curator of photographs at the New York Public Library, said in a telephone interview. “She was a documentarian who just didn’t quit.” Ms. Van Haaften curated a group exhibition that included Ms. Cherry’s work.

At her death Ms. Cherry, who was the subject of an exhibition last year at Daniel Cooney Fine Art in Manhattan, was working on a book of her Third Avenue El photos, many of which have never been published. Her son said he hoped to have it published soon.

Ms. Cherry was born on July 27, 1920, in Manhattan and later moved with her family to the Bronx. Her father, Sasha, known as Sam after he immigrated from Russia, was a house painter. Her mother, Ida (Agranovitch) Cherry, was a homemaker who had been a dentist in Russia.

Vivian aspired to be a dancer and studied dance starting at age 12 at the Denishawn School in the Bronx. She graduated from Walton High School and briefly attended the University of Wisconsin, Madison. She danced in nightclubs and burlesque and in a Coney Island side show. During World War II, she danced with the Lunch Hour Follies, an entertainment project of the American Theater Wing.

In late 1944 and early 1945, Ms. Cherry danced in a short-lived Broadway musical, “Sadie Thompson.” After injuring a knee, she found a job at a photography lab.

She had no experience, but as she learned to print other people’s photographs on an enlarger, she became interested in taking her own pictures. Using a Graflex camera, she started what would be her new career.

Ms. Cherry continued to take pictures after her knee healed, and she returned to Broadway for a yearlong run in a revival of “Show Boat.” But when the musical closed, Ms. Cherry made up her mind: She was going to be a full-time photographer.

“I was in a fantasy world when I was a dancer, and this was reality,” she told The New York Times’s Lens blog in 2012. “So much was going on in the world, and I wanted to be a part of it.”

In 1946 she joined the Photo League, a left-leaning organization of photographers who emphasized social realism in their work. While there, she found her mentor in Sid Grossman, a founder of the league and one of its teachers. She soon began receiving assignments from magazines and advertising agencies that would take her beyond New York City for essays, including one about a doctor for a coal town in West Virginia.

A series of photographs of Dorothy Day, the radical Roman Catholic activist, that Ms. Cherry took in the 1950s for Jubilee magazine were used in the 2016 book “Dorothy Day and The Catholic Worker: The Miracle of Our Continuance,” which has text by Ms. Day (who died in 1980) and her granddaughter Kate Hennessy. In 2007 Ms. Cherry published “Helluva Town,” a collection of her pictures from the 1940s and ’50s.

In the early 1960s Ms. Cherry turned away from photography for about 25 years. During that time she made jewelry and worked as an X-ray technician with her husband, Dr. Louis Finger, an internist, from whom she would later be divorced. In all, she was married and divorced three times and widowed once.

When she returned to photography, Ms. Cherry started shooting in color for the first time, notably for a series about tattooed people. Some of those pictures appeared in her autobiography, “Vignettes: Chapters From a Life” (2012).

“Somewhere in her 80s, she told me she wanted to be a war photographer,” Mr. Schmidt, her son, said. “She wasn’t looking back, not wishing she had been a war photographer. But she was looking forward. I talked her out of that.”

Still, during a period in the 2000s, when she was covering parades and demonstrations with possible books in mind, Ms. Cherry was trampled in Manhattan during a protest against the war in Iraq.

“I was invisible, and I wasn’t as fast as I used to be,” she said at the B & H talk. “They were holding banners and started yelling, ‘Let’s go!’ and I tried to get out of their way and got trampled and broke my hip, my wrist and a couple of ribs.”

She added, “I try not to get in the middle of crowds now.”