Victorian Premier Daniel Andrews has tested positive for COVID-19 on a rapid antigen test, after coming down with mild symptoms on Monday morning.

In a statement, Mr Andrews confirmed he would be isolating for the next seven days and James Merlino would step into the role of acting premier for the coming week. 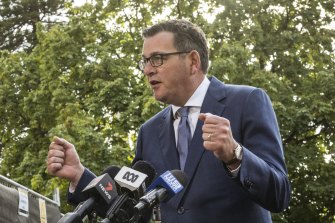 “After developing mild symptoms this morning including a sore throat and mild temperature, I undertook a rapid antigen test,” Mr Andrews said.

“I have tested positive to COVID-19 and will now isolate for the next seven days.”

His wife Catherine and three children have all returned negative results but will be isolating as close contacts.

“So far, Cath and the kids have tested negative. As they are close contacts, they will also isolate for the next seven days,” Mr Andrews said.