Knowing a film has won a big prize at a major festival can burden one’s expectations, so I am not going to mention the grand prix at Cannes last year, shared with Asghar Farhadi’s A Hero. 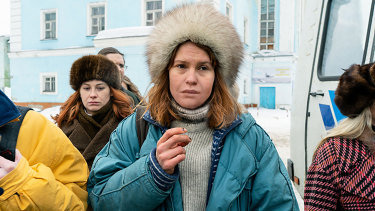 Let’s approach this Finnish co-production with a clean slate, an open heart. A young woman leaves Moscow for a long train trip to the east. She is Finnish, speaks halting Russian, and has a strong desire to see the obscure petroglyphs of Murmansk. It is necessary to understand where we came from to know who we are, she keeps repeating to herself — an obvious signpost by the Finnish director Juho Kuosmanen (in only his second feature), in a film with very few of them.

Laura (Seidi Haarla) does not really know who she is. In two years in Moscow, she has fallen in love with the older woman whose apartment she shares — the gregarious Irina (Dinara Drukarova). The scenes before she leaves make clear Laura does not feel fully at home in Irina’s academic circles, where they smoke dope and show off about the books they’ve read.

On the train, her worst nightmare unfolds. A young bullet-headed Russian man shares her sleeper compartment — and he’s going to Murmansk as well. On the first night, he wipes himself out with vodka and tries to grope her, but she has nowhere to run. Even the female conductor is unsympathetic when she asks for another cabin: “What makes you think you have a choice?” 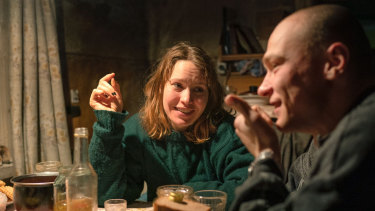 So begins an unlikely romance. The young man, who seemed uneducated, vulgar and aggressive, turns out to be nicer when he’s sober. It’s as well they have several days to cross the great Russian steppe, otherwise the story would want for time to make their feelings credible.

In terms of storytelling, minimalism rules. Kuosmanen gives nothing away without a fight. The waypoints are so quiet that you can easily miss a moment of change. That’s eventually a strength, but it takes half the film’s length to establish Kuosmanen is not playing by the rules — at least not the rules of speed and clarity other directors favour.

We learn next to nothing about the background of Laura or Lyokha (Yuri Borisov). In fact, the movie was almost over before I knew his name. It doesn’t matter: we can see he is damaged, she is lonely, that he fears his emotions, or the vulnerability in being kind. We can see, if you want to extrapolate, the whole uneasy history of Finland and Russia in the way these two relate, but it’s not necessary to the process of getting caught up in their story.

It’s that kind of movie: days and days go by in the white wilderness, which we seldom see except from inside the train. Very little happens between these two unhappy souls. And then, as the end nears, I found myself hoping it would keep going. Go figure. It takes quite some skill to be that crafty.