Prime Minister Scott Morrison has criticised "things that were said" to incite the violent riots on the US Congress without directly naming President Donald Trump.

Mr Morrison, who had previously declined to comment directly on Mr Trump’s role in inciting the riots, said the US was going through a "very terrible time" but he was looking forward to the country "uniting and moving on". 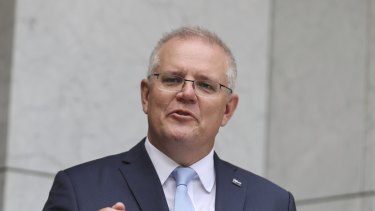 Prime Minister Scott Morrison has crticised comments which invited the storming of the US Capitol.Credit:Alex Ellinghausen

"The things that were said that had encouraged others to come to the Capitol and engage in that way were incredibly disappointing, very disappointing, and the outcomes were terrible," Mr Morrison told 2GB on Monday afternoon.

"But I think what's more important now is not for me to be providing lectures to anybody."

On the day of the riots, Mr Morrison joined other world leaders in condemning the violence at the US Capitol but said "it is not for me to offer commentary on world leaders".

Asked about being "close friends" with the outgoing US president on Monday, Mr Morrison said: "I've worked closely with the president as you would expect me to. I didn't know the president before I was prime minister in any way, I had worked with others in the administration."

He also confirmed he has not spoken to President-elect Joe Biden since they shared a phone call days after the US election.

"We had a very good conversation at that time, but then there a whole series of protocols you observe and you need to wait until people are formally sworn in."

UK Prime Minister Boris Johnson has invited Mr Morrison to Cornwall in June for the G7 meeting, which could be his first chance to meet with the new US president if he doesn't visit Washington before then.

Mr Morrison also refrained from criticising Victorian Premier Daniel Andrews’ decision to close the borders to NSW amid a blowback over the state allowing tennis players in to compete in the Australian Open.

He said said the flexibility of the Northern Territory and NSW in responding to outbreaks had shown states were addressing the pandemic in different ways.

"All the states are different… they’ve all got different circumstances … the way borders impact is different from state to state," Mr Morrison said.

"You’ve just got to deal with what’s in front of you and make the best calls you can; that’s how we’ve got through it."